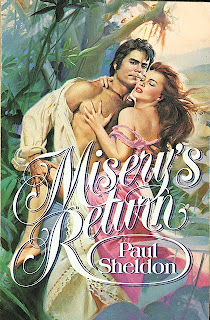 I can't believe I almost missed this, the 63rd birthday of the preeminent horror writer of the latter half of the 20th century, Stephen King! No one will be surprised to learn that I despise the current paperback covers of King's work. Sure, his books have been reprinted countless times over the past 30-odd years, but nothing stacks up against that awesome first edition cover art from the 1970s and '80s. 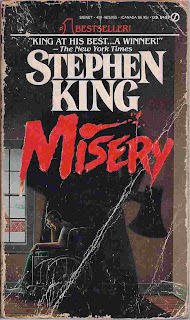 Take this paperback of Misery (Signet 1988): it's the same cover as the hardcover edition. But what sets it apart is the image at top, just inside on the second page; a faux-cover, if you will (it's actually called a step-back). It's a mock-up of the bestselling historical romances that protagonist Paul Sheldon writes which so obsess Annie Wilkes - except that's King himself in the place of, say, Fabio. Heh. Nice touch, no? Of course, Misery's Return is the book Annie forces him to write because she is, like many of us, his number one fan.

I love this classic-era "logo"
Posted by Will Errickson at 7:40 PM

Sweet cover art, too, that tells an interesting story all by itself: the barren corner of what appears to be a large empty room, the desolate figure in the wheelchair by the window (itself offering a glimpse of a chill, wintry scene outside), and the central sinister looming shadow.

And all shrunk down to the dimensions of a mass-market paperback without feeling at all cramped or allowing any one element to squeeze out the rest. And furthermore, all perfectly clear even with that logo and the menacing blood-streak title spread across it (except, of course, for the shadow, but even there the added layer of obscurity just adds to the total effect).

Yep, they really knew what they were doing with these book things back then.

I just discovered your blog, it's fantastic! As a kid in the 80s I was terrified by horror paperback covers. Now I'm fascinated by them. I read all the early Stephen King back in the day, but now I'm curious to delve more into the genre.

You should do an entry on the tacky V.C. Andrews style "family horror" novels of the 80s. There were lots of knock-offs, might be some gems in there.

Thanks, roarvis. Funny you should mention family horror; I was just looking at a book on eBay the tagline for which was "Brother, sister, madness, sin...something something" which creeped me out, and made me think of the VC Andrews series. So, yeah, one of these days!

I'm with you there, on all those early King paperback covers that rocked. My all-time favorite is the cover for Cujo, with Cujo's salivating muzzle and sharp teeth. When I first saw that book on the racks, I immediatly thought "MUST HAVE THAT! NOW!"