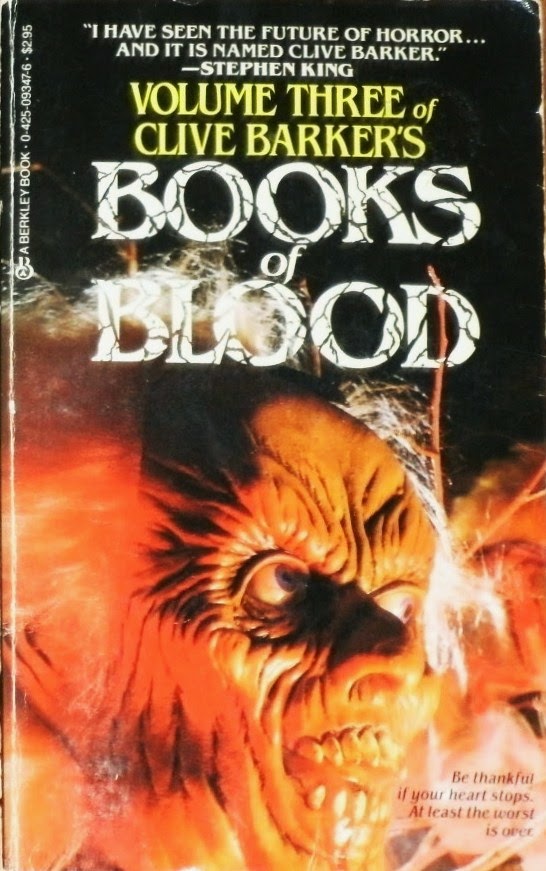 More glorious short-story mayhem from the best. Clive Barker continued his revolutionizing of the horror genre with Books of Blood, Vol. 3, which was the first thing I ever read by him way, way back in January 1987. I bought it based on the Berkley 1986 edition cover alone, and can still recall sitting in a mall courtyard reading the first story, "Son of Celluloid," and being a tad put off because Barker's measured, careful prose was so very British. His style was unique and took a bit of warming up to. There was little of the neighborly chumminess of Stephen King's work, or the weighty obliquity of Ramsey Campbell's. Nothing of Lovecraft or Matheson, either, I daresay. Barker was sui generis. 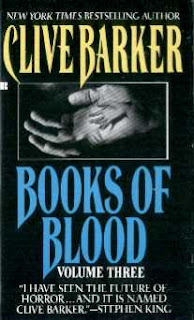 Instead, there is a polite informality, a deft and dry wit in his writing, as if to make the horrors more palatable, the deformities less alien, the grotesqueries a welcome respite from reality. A large part of Barker's horror philosophy, if we can call it that, was that horror should subvert our (often wrong) notions of normality and beauty. From "Scapegoats," which evokes the zombie-island nightmares of Italian exploitation film but is laced with an unexpectedly poetic tone:


And I, losing my life with every second, succumbing to the sea absolutely, couldn't take pleasure in the intimacy I'd longed for. Too late for love; the sunlight was already a memory. Was it that the world was going out - darkening toward the edges as I died - or that we were now so deep the sun couldn't penetrate so far? Panic and terror had left me - my heart seemed not to beat at all. A kind of peace was on me. 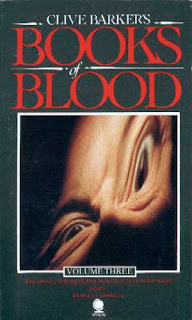 True, in a story like the infamous "Rawhead Rex" - made into a dismal film in 1986 that Barker disowned at once - there is a ravenous creature that has an enormous head like a skinned penis and a mouth like a vagina dentata. No holding back from the terrors of viscera and humiliation here. In "Son of Celluloid," another well-known story, a criminal's cancer, his literal cancer tumor, infests a fleabag second-run movie theater and brings to horrible life the ghosts on the screen that fascinate us so, but which need our eyes to exist. This incredible cover for the UK paperback edition from Sphere (below), with Barker's own art, presents one of that story's more memorable moments: our Norma Jean (the fuckable fiction, her hapless victim notes), teasing us with the fur divide that had been the dream of millions. 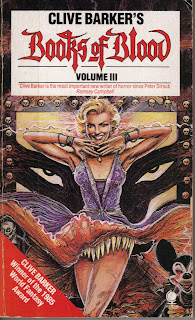 "Confessions of a (Pornographer's) Shroud" is a revenge tale of mobsters and meek accountants that would have not been out of place in the old EC horror comics that the generation prior to Barker grew up on; it contains one of his most inventive deaths, which my friends and I in junior high used to marvel over. A man takes possession of the linen placed over him in wrongful death; a wraith, an actual ghost that appears to be a person wearing a sheet as a Halloween costume, he seeks out the men who framed, tortured, and killed him.


His flesh and blood body was utterly deserted now; an icy bulk fit for nothing but the flames. Ronnie Glass existed in a new world: a white linen world like no state he had lived or dreamed before. Ronnie Glass was his shroud. 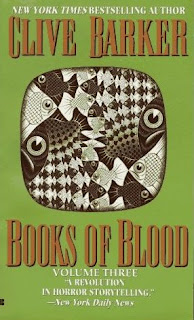 Why, that makes think of Barker's wonderful second novel, Weaveworld, in which an entire world is taken up inside an intricately woven carpet. Nicely done, sir. "Human Remains" ends this volume, a fine and sensitive work about Gavin, a gay hustler, and his doppelganger, come to steal his face, the only possession Gavin has worth anything. They meet when it rescues Gavin from sure death at the hands of a pimp:

"I am a thing without a proper name," it pronounced. "I am a wound in the flank of the world. But I am also that perfect stranger you always prayed for as a child, to come and take you, call you beauty, lift you naked out of the street and through Heaven's window. Aren't I? Aren't I?"
How did it know the dreams of his childhood?
..."Because I am yourself, made perfectable."
Gavin gestured towards the corpses. "You can't be me. I'd never have done this."
"Wouldn't you?" said the other.

"Human Remains" showcases Barker's penchant for marginalized characters that lurk in darkness and giving them a voice. A story that rather puzzled me when I was a teenager but rewarded a rereading as an adult, it's a highlight of the entire six-volume series, I believe.

Now, I wouldn't necessarily recommend Volume 3 as the best place to start if one has not read Books of Blood - one really should start at the beginning, go through to the end, and then stop, and begin again - but I am still thankful that it was the place I started with Barker and his brand new world of horror for the future. And I haven't stopped yet. 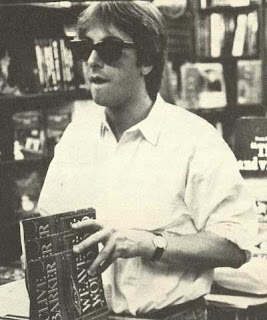 Posted by Will Errickson at 7:00 PM

I just bought a copy of all the Books of Blood and can't wait to read them. I've never read any of Barker's stuff before, though, and I don't know how I'll like it. Sometimes fantastical stuff doesn't work well with me. Are all of his stories really out there like I keep reading about?

That incredible thing about all six volumes of Books of Blood is that they run the gamut from out-and-out gory horror ("Midnight Meat Train," "Rawhead Rex," "Skins of the Fathers") to quiet horror ("Human Remains," "Dread," "Life of Death") to strange, vivid, unclassifiable tales ("Babel's Children," "In the Hills, the Cities," "Inhuman Condition," "Age of Desire"). Some subtle, some outrageous, some oblique. All worth reading and deciding for yourself. Enjoy; I'm almost envious of your first time reading these stories!

'In the Hills, The Cities' is an incredible story. I read all six volumes of 'Books of Blood' whilst at college in the mid 90's, and I think my re-reading of them is long overdue. In fact my blog's URL is named after a Barker short story in tribute :-)

I have a great nostalgic love for those Berkeley covers. They jumped right off the shelf into my 17 year-old hands. Fortunately Barker's career wasn't negatively impacted by such cheesy treatment. His subsequent covers were all very artsy by comparison.

My favorite cover of his is the UK edition of Great & Secret Show, as well as the US edition of Imajica. But yes, mad love for those original cheesy paperbacks!

Volume III is also just as strong as the rest, in all due respect. "Son of Celluloid" is a fantastic and imaginative read — one of the best. I'd say the weakest story would be "Confessions of a Pornographer's Shroud," but that's not to say it isn't worth the read or very solid in itself. "Rawhead Rex" is the quintessential "in your face" Barker, as well. "Human Remains" is very interesting and errie as well — I still have a firm picture of the statue in the bathtub.

"Scape Goats" is pretty solid, too. Paints a nice image, and it's very simple. Kinda like a King story, actually.

I love the paperback image of Marilyn Monroe ("Son of Celluloid").

All of these stories in this volume (and probably all the other volumes) I would read again because Barker is able to paint fantastic imagery.