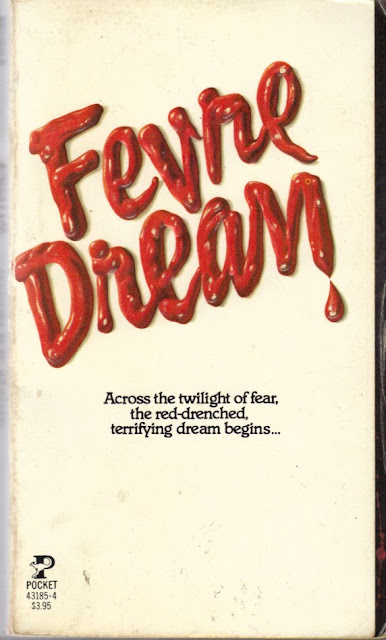 Set aboard an Ohio River steamship in 1857, George R. R. Martin's only horror novel Fevre Dream may have an original setting but it's squarely in the traditional vampire sub-genre. Regal creatures of the night dressed in the finest dark velvet and flowing pirate shirts pontificate upon the nature of master and slave, life and death, good and evil, when not gulping down steaming freshets of blood. Or reading a volume of Byron poetry, natch. Look upon my works, ye Mighty, etc. 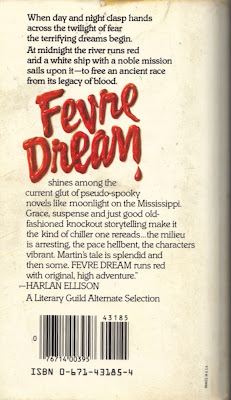 Since the period is pre-Civil War America, we see some of the grim literal actuality of the vampires' metaphor of master and slave. It's an interesting dynamic Martin's created. All humans are unwitting slaves to the vampire - a name the creatures reject - and the vampires are slaves to the "red thirst," while privileged whites make other races into subhumans. Horrified to learn that the all-too-real vampires refer to the human race as "cattle," Abner Marsh, the ugly, cantankerous yet still likable owner of the Fevre Dream steamboat, slowly makes the connection with that other plague upon humanity. 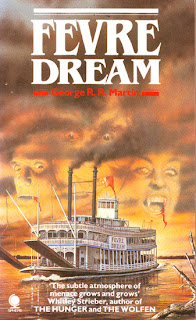 Martin's characters are colorfully drawn, from the various men - some former slaves, many seasoned rivermen - who run Marsh's ship to the mysterious Joshua York who enlists Marsh to build Fevre Dream for some unspoken reason, to the mad vampire "bloodmaster" Damon Julian and his cruel and cowardly human dogsbody Sour Billy Tipton; truly an impressive supporting cast. With a gift of pure storytelling and and historic detail, Martin spices his tale with time- and character-appropriate grammar and slang. And in its own gruesome and believable way, this story is ultimately about friendship. 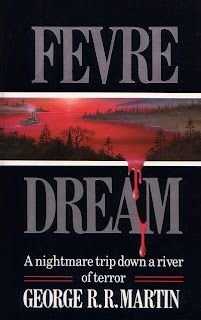 However, it resembles Anne Rice's Vampire Chronicles in its New Orleans and Revolutionary-era France portions. I don't know when Martin first conceived of this novel, so perhaps his predates hers; perhaps not. And its rich setting and descriptions of the river-boating working life also seem, after awhile, to bog it down so that about three-quarters of the way through, it rather runs out of, er, steam, despite an impending climax between Marsh and the "night people." I liked Martin's origin myth for his vampires - shades of Clark Ashton Smith...


From all lips I had heard a legend of a city we had built, a great city of the night, wrought in iron and black marble in some dark caverns in the heart of Asia, by the shores of an underground river a sea never touched by the sun... we had been expelled from our city for some crime, had wandered forgetful and lost for thousands of years... some day a king would be born to our people, a bloodmaster who would gather our scattered race together and lead us back to the city of the night beside its sunless sea. 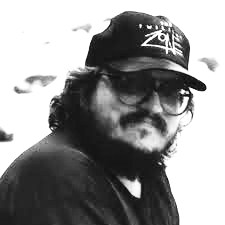 Overall Fevre Dream is a good read; if not particularly scary, it is vividly imagined, quite violent, and mostly engaging; Martin is a solid writer and I can see why so many people devoured his later novels of heroic fantasy. Vampire fiction fans should pick it up for its unique setting, but it's not the kind of paperback horror novel I'd tell fans that they must drop everything for so they can scour old stores for a vintage copy. In fact, I somehow missed it on the shelf while browsing a warehouse-sized bookstore here in town; my girlfriend spotted it quickly and snatched it up. I had to promise not to wear it out any more than it already was if I wanted to read it first. I'm not sure what's up with that ketchup-letter font on the 1983 Pocket Books paperback edition; I much prefer that paperback's inner flap (below), which was the original hardcover art. 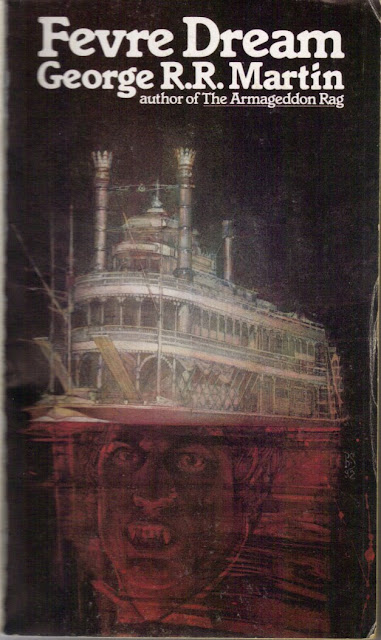 Posted by Will Errickson at 5:00 PM

I like the stark '80s simplicity of the cover's design, but yes, that squeezed-out-of-a-ketchup-bottle lettering is decidedly unappealing. It probably wasn't long before the creative mind behind that particular stylistic choice found himself back behind the counter at his local burger joint, doodling secret messages onto meat patties to his heart's content.

I would consider Armageddon Rag, at its core, a horror novel. Also, he wrote some amazing short horror stories that blend with classic science fiction elements. "Sandkings" is the most popular of those and is well worth a look.

You're the second person to recommend "Sandkings" to me! I really gotta find it now after reading about a synopsis on Wikipedia.

I've been looking to read "Sandkings" ever since watching the OUTER LIMITS adaption of it on Showtime many years ago. I've just never come across a copy of the Martin anthology that it's a part of in person yet.
I should just go ahead & order a used copy one of these days & be done with it.
I did, however, come across the very copy of FEVRE DREAM featured here a year or two back, though it's firmly sandwiched within one of my TBR piles...

Speaking of Martin, I'm still battling with myself over whether or not to buy the first novel in his ongoing fantasy epic.
I've heard nothing but praises about it & I'm looking forward to watching the upcoming HBO adaption, BUT...
I don't read fantasy.
Nope, not even a one of THE DARK TOWER series & I'm a lifelong King fan.
THE TALISMAN & BLACK HOUSE are as close as I've ever come to reading straight up fantasy. Something about all those wizards & elves & fairies & such found in fantasy novels just turns me off.
Honestly, I don't even watch most fantasy films. The LORD OF THE RINGS films?
Never seen 'em.
The only reason that I'm interested in HBO's upcoming series is because I've heard that the books are a very adult take on the subject matter, so...

Bluerose, I feel the same way about fantasy. I have dear friends who swear by King/Martin/Tolkien but that's just not my thing. I've seen the LOTR films and they are excellent examples of book-to-movie adaptation plus marvels of filmmaking, but I feel no special connection to 'em. HBO does fantastic stuff so maybe the Ice & Fire series will be worth watching, but whenever I see forests and mountains and bearded dudes on horseback in medieval settings, I'm all snooooze....

Just curious, now that it's been some time - have you checked out GAME OF THRONES yet, Will?

I, too, would hardly call myself a fantasy fan (though I do adore the Dark Tower series), but, man, GoT grabs you by the throat and doesn't let go.

No joke, as one horror fan to another, it took knowing that bona fide zombies are involved for me to finally start reading ...

I haven't, Nat, and from many friends and acquaintances (and girlfriend) I've heard of the throat-throttling intensity of the GoT series. Didn't know there were zombies! No plans to read it, however; too much horror fiction, and all that...