Spook by Steve Vance (1989): The Day the World Turned Day-Glo 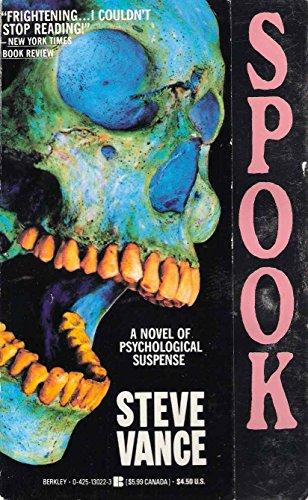 Neon was a popular genre paperback coloring for titles and cover art in the very early '90s, I can remember authors as varied as Joseph Citro and Iain Banks having their books adorned with it. Vaguely psychedelic, but also kinda cheap, these Day-Glo colors glaring out at your from the shelves. I guess you almost had to pick 'em  up, though, didn't you? And if you picked up Spook (Berkley Books, Nov 1991) back in the day and flipped it open expecting to see some more eye-penetrating imagery, you'd get instead: 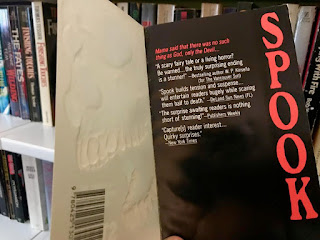 Yep, critical blurbs in place of stepback art. So weird. And yet, Spook offers nothing but that toothy skull and neon typeface. Author Steve Vance has written other horror novels but I can't imagine reading any of them. This is really one of the most nothing books I've read in some time, and while I was intrigued by one aspect of the narrative—failed artist seeks vengeance on the man who impregnated her with the titular "spook"—this aspect should have been most of the story. Instead we get hohum romance, indistinguishable cops, a slackly-characterized protagonist, and a cast of the most obnoxious, tedious teenage morons you ever saw. The whole shebang is here on the back: 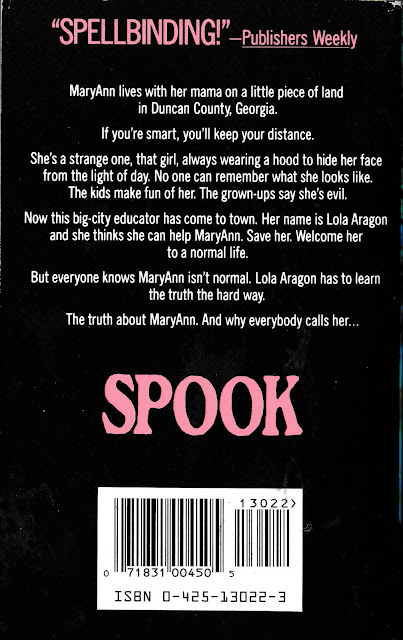 "Spellbinding"? Hardly. Vance can write, I guess, and you can tell he wants to produce a serious horror/thriller novel, but he has absolutely no sense of pacing, POV, dialogue, suspense, chills or thrills—you know, all the reasons you read. Maybe if he'd used this as a first draft and then broke the novel down into individual parts and reassembled it, making his backstory the story or something. The twist is good, but I feel the book was reverse-engineered from it. 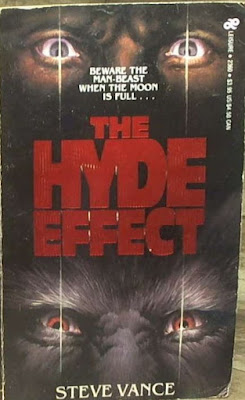 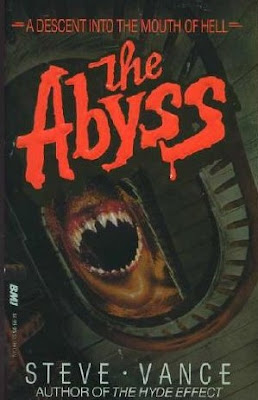 But I kept waiting for something, anything, to alleviate my lack of interest; it never came. I didn't find the book stupid or insulting, crass or tacky or inept like other bad horror novels; I found it utterly unengaging, devoid of almost anything unique, fresh, inventive. There's no there there. Even though I finished Spook, I have to recommend you keep far, far away from it—If you're smart, you'll keep your distance. As for reading Vance's other novels, I don't think that day will ever come.

Posted by Will Errickson at 8:54 AM

I have his other book The Hyde Effect. I've heard great things about it so hoping it will be.

Oof. Unengagingly bad is so, so much worse than hilariously terrible. Thanks for the warning.

Yeah, I remember being pretty underwhelmed by this one. Wasn't terrible, it was just "meh." Did like the cover, though.

The Hyde Effect is actually entertaining pulp, to the best of my recollection. It has a sequel (or at least, same world) Shapes, maybe? I'm pretty sure I read this one and Identity as well but I remember zero about them