Joyride by Stephen Crye (1983): Long After the Thrill of Living is Gone 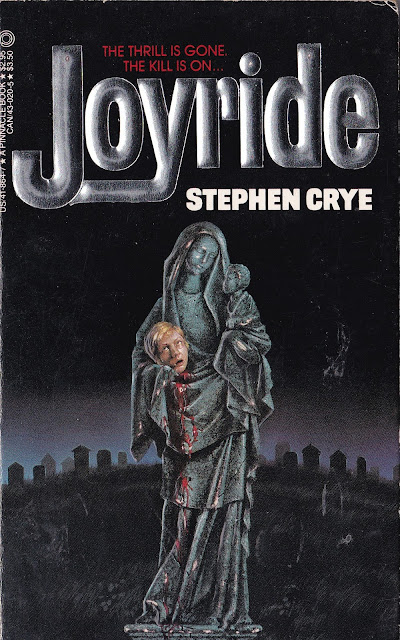 Pity poor Robert James Atchison. Living in a California town known as America's preeminent burial ground, where the dead outnumber the living five thousand to one, he's a sensitive 17-year-old boy with a fondness for poetry, instilled in him by his dear departed mother, and he actually enjoys reading books like The Iliad for school. He may have good hair, vibrant eyes, and fine features, but all that's lost on his high school classmates: to them he's a gangly, awkward-limbed, tongue-tied goof who they've nicknamed "Coma Man" with an embarrassing crush on Carla, the prettiest girl in school. He's written Carla a poem and has two scarlet ribbons to give to her. What could go wrong?

And then there's Robert's widowed father, a cemetery caretaker paralyzed in a graveyard accident—sure, those things happen—who is a raging bastard in a wheelchair, demanding the same breakfast every morning at the same hour and wants Robert to continue the family tradition of being a raging bastard cemetery caretaker. But one morning Robert has had enough. He's had more than enough: I won't let him make me dead inside... I just want to live a normal life. 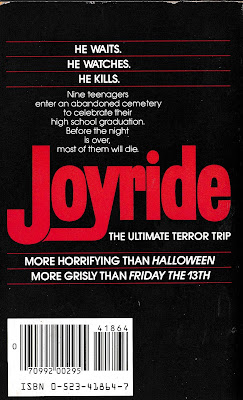 This 1983 paperback original from Pinnacle, one of the mainstay publishers of the era, is nothing more nor less than a slasher flick in book form. Joyride, by Stephen Crye (according to a post on Goodreads, the pseudonym of a Ronald Patrick, who also wrote a previous Pinnacle novel from 1978 called Beyond the Threshold). And while I'm no slasher fan—it's one of my least favorite types of horror—I have to say Joyride is a competent, no-frills novel that does what it does perfectly well. If it ain't Halloween, it's maybe at least The Burning.

You can see the setup cinematically: a group of dumb, horny, wise-cracking, junk-food-snarfing teenagers cruising around looking for a place to party one night ignores a No Trespassing sign outside the gates of All Saints Hill Cemetery and drives on in. Yep, that's the cemetery that our pal poor Robert is caretaker of; he's been living there in the years since high school, after lying to officials that he had an adult guardian staying with him. Nope. And ever since a tragic last-day-of-school fireworks accident—sure, those things happen—Robert has festered with his scars, both mental and physical, in this cemetery, dreaming his dreams of his high school princess and of vengeance:


He wondered if any of them really understood how deeply he had suffered because of their cruelty... how he had been forced to retreat into the loneliness and despair of total isolation just to avoid the endless succession of humiliating stares from people who could never understand... how he had thought of killing himself at least a thousand times since the accident... 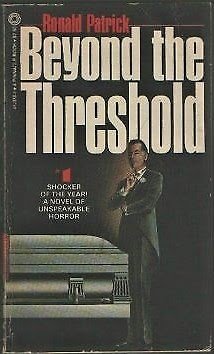 In his fevered mind, the killer thinks one of the girls, Priscilla, is his old teenage sweetheart Car-r-r-r-la, so after he burns her boyfriend alive he stuffs her in a sepulcher, hoping to teach her to love him. Don't make me hurt you, you made me do it, I didn't mean to hurt you, Cleats is thinking, a thought process which should surprise absolutely no one. He's also stalking her friends, wandering about in the cemetery and who by now have discovered the gates have been locked again and are too high to climb over. The kids get dead in various ways, as Robert—now dubbed "Cleats" because of, you know, his shoes—goes after them with various cemetery caretaking implements. The kills are graphic but not too graphic, just like in an R-rated flick: The blade cut deep into his skull, splitting it down the center like a ripe melon.

The fat kid (I didn't say there was a fat kid? there's a fat kid) who is of course called Twinkie, ends up searching for help in the caretaker house (why doesn't he look for a phone) and there finds an old gentleman sitting alone at a dining room table. Stepping forward, he craned his head around the edge of the chair to meet the eyes of the man who would liberate him from the clutches of All Saints Hill. Ah, can't you guess what's coming? Some final kids are left for the face-off in the time-honored slasher tradition, when the killer seems to be everywhere at once. 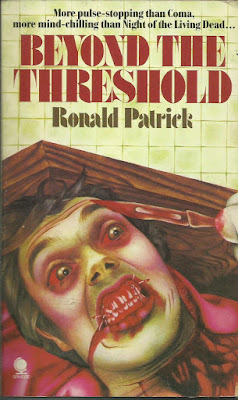 At times Crye is tedious in his descriptions of dumb teens in a panic—Pleeeese don't kill me, oh my god oh my god, he's coming back! I hope he kills me fast I mean you can see EC Comics speech balloons—but occasionally he writes a passage like A shimmering mosaic of buttery morning sunlight filtered through the checkerboard of dusty windowpanes or Priscilla had eased her mind into a state of suspended rationality that others, for wont of a clearer understanding of her despair, would call madness and you'll be glad for it. I found the high school flashbacks more interesting than the teens flailing away in the cemetery more engaging, so I'll be honest and say I did skim some pages but I don't think I missed much.

Joyride is not original and doesn't intend to be anyway, but nor is it terrible at all: I've read more original novels that were worse-written, unreadable and charmless. At 250 pages, Joyride is brief and mostly brisk, won't insult your intelligence, and you can read it in a weekend. It's a tasty, mindless little morsel of slasher mayhem. Oh, and that glorious cover art at the top by Sonja Lamut and Nenad Jakesovic? Yeah that's in the book! O joy indeed.

I remember liking this pretty well at the time and wondering why there weren't more "slasher movie novels." It seemed like two out of every three horror movies at the time were Friday the 13th rip-offs, so why didn't that translate to books? This one was pretty much the only book I ever found that truly felt like that's what it was trying to be. Yeah, it's no major classic, but it's fun for what it is.

Someone commented on FB that this read like the novelization of an unproduced screenplay, which makes perfect sense. Don't know why there weren't more books in this vein, you're right, but then again that's ok with me bc generally I've never been a slasher fan!

Ron Patrick was my boyfriend in the mid-late 80s. He was exactly what you would NOT expect in a horror writer -- very handsome, kinda hunky, a steady but not drunken drinker. For the record, this wasn't an unproduced screenplay; Ron just wanted to see if he could write a book.

If I recall correctly (and this is 30 years ago), he was an editor at one of the houses regularly knocking out genre fiction. His two books were mostly a lark for him, and they were fun to write. (Though he was proud enough of Beyond the Threshold to put it out under his own name.)

He didn't write more because (a) it was mostly a lark (b) he wanted money upfront and (c) he spent a lot of time having fun.

What a great surprise when I opened your blog today!

Wow, thank you for sharing, that is very interesting. When you say "he will be missed", does that mean he passed away?

Yes, sadly, some time ago.

Fun facts: he really liked The Twilight Zone, when he was pissed off at someone he would put their picture in the freezer (!), and he was always the guy who seemed to have the most fun at a party. He had this apartment in the far West 40s (I think....) with a roof deck where he would grill and sell would sit and have cocktails.