My Eyes Have Seen You: The Sixties Supernatural Spy Novels of John Blackburn 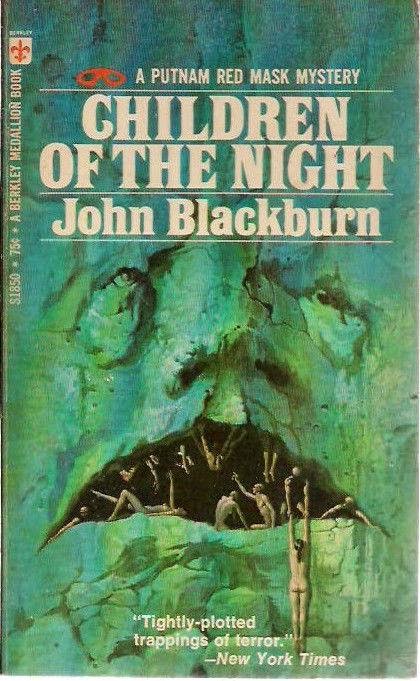 While on my cross-country trip earlier this summer to relocate to Portland, OR, I visited many a used bookstore and bought many a used book (you may have seen photos). In one store I found a cache of paperbacks in very good condition by John Blackburn (1923-1993), a writer I was familiar with only because his first novel, 1958's A Scent of New-Mown Hay (published in the US as The Relucant Spy in 1966), was included in Horror: Another 100 Best Books. These paperbacks were a bit out of my price range (although I did spring for Charles Birkins's Smell of Evil), but now I'm kinda regretting not biting that bullet and buying 'em. 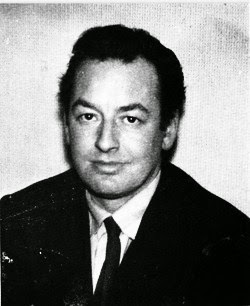 Many weren't even released in the States, or were published only in the 1960s--hence the collectible prices today. Small independent press Valancourt Books is doing the good, good work of reprinting many if not most of Blackburn's other previously out-of-print novels. The trade paperbacks these guys are putting out are splendid, with new introductions and smart, vibrant, modern covers that also reference some of these vintage editions. 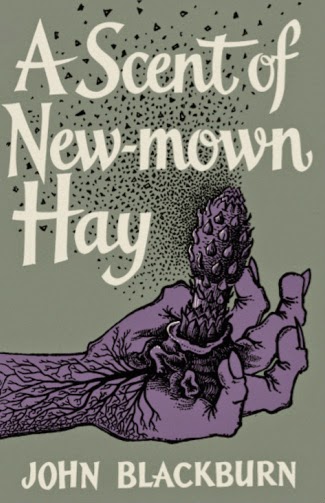 I've never read any kind of spy/espionage novel, not a LeCarre or Ludlum or Fleming in all my entire collection of paperback fiction, so admittedly I'm intrigued by ones that have a supernatural twist to them, especially when it seems to have been done with skill and invention (Clive Barker did such a thing in his short "Twilight at the Towers"). The word "ingenious" gets mentioned with Blackburn a lot, and man, I just don't read enough books that make me go, "Wow, now that was ingenious!"

Anyway, I'm posting these old paperback covers solely because I dig 'em; don't you? I mean that Children of the Night (Berkley Medallion/1970)--one of the most over-used titles in all of horror, thanks Count Dracula!--is something to behold, a true creepfest, as nudists there seem to be enjoying an adults-only getaway in a monster maw. 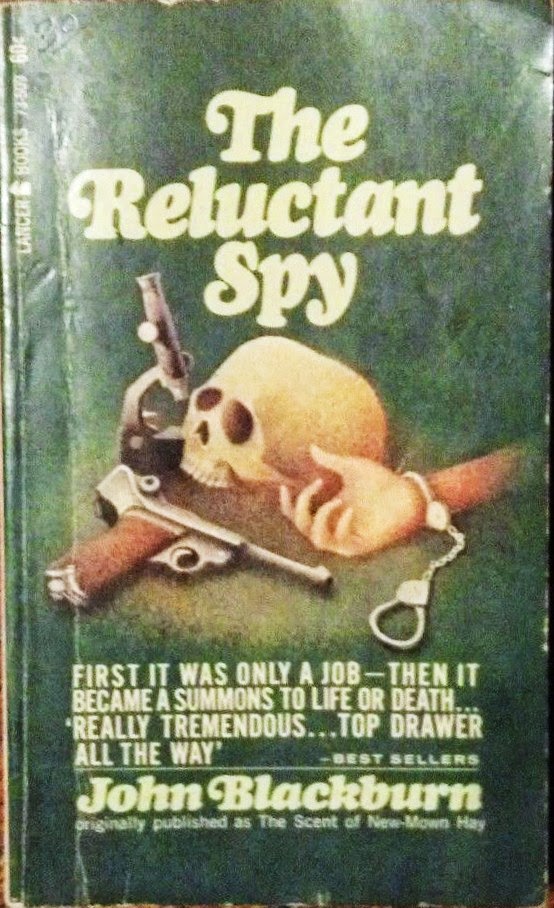 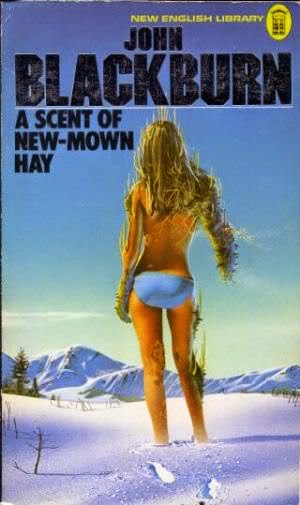 The title-switch of New-Mown Hay to Reluctant Spy (Lancer/1966) makes sense; I'm the sure the original title refers to some moment of dreadful import within the story itself (although I don't think it refers to a bikini-clad ass [NEL/1976]), but for unfamiliar readers it doesn't exactly scream "must-buy!". The stark simplicity of cold marble and black iron of Bury Him Darkly (Berkley Medallion/1970) bespeak... well, someone buried darkly. 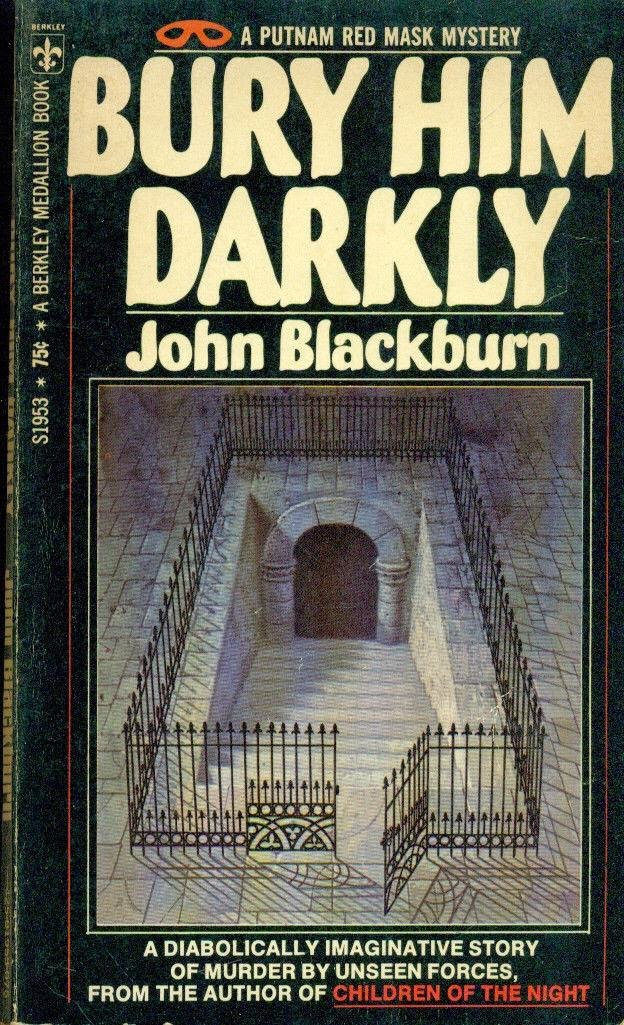 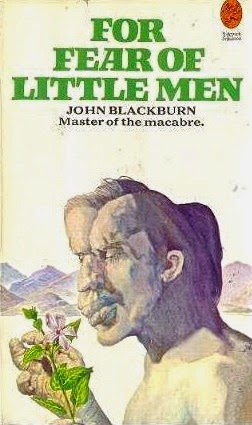 For Fear of Little Men (Coronet UK/1974) uses poor John Merrick to some touching effect, and the juxtaposition of rat and child on Wreath of Roses (Lancer/1966), might that be a precursor to a Mr. James Herbert? Perhaps. Broken Boy (Lancer/1966) has a good review and some author background here. "Cold-war espionage" leaves me, well, cold, but knowing what I know about Blackburn now, I wonder. Cold war? I think it likely also means cold chills.... 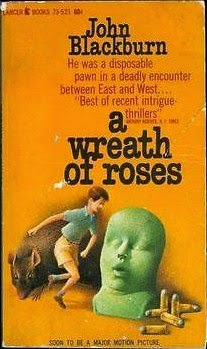 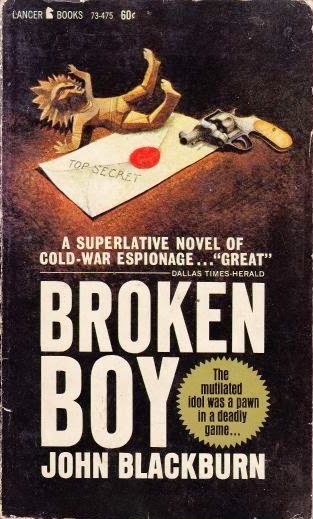 Posted by Will Errickson at 7:30 AM

"Broken Boy" is a very good novel. The historical background is unique, as far as I know never done again in horror fiction. The the supernatural angle is rather slight. And of course it is very much a novel of its time. But I liked it.

I've got that top copy of Children of Night, but I haven't read it because outside of being in perfect looking condition, the entire cover, front and back just slides right off of the still glued together pages. I'm afraid that if I do try and read it, it will just come apart page by page.

I also have a destroyed original hardback of Scent of New Mown Hay and I have read that one. Reminded me of Wyndham something fierce but with a more pro-active main character.

Do these all star the same protagonist? Sort of a Night Stalking James Bond? Or are the all just of a supernatural spy-thriller genre?

Blackburn's novels are incredible. I'd heard about them for years but the original hardcovers are costly and until Valancourt's reprints emerged (what an amazing press) copies were hard to come by here in the States.

He basically had two streams of work that frequently overlapped. There were the thrillers (espionage, crime) that had supernatural (or seemingly supernatural) elements and horror novels that all have crime or thriller elements.

What makes his work so readable, for me, are two things: it's very, very British (all fog and manners) and it's deliciously horrific. He weaves a lot of mythology, science, and an almost overwhelming fear of "fungoid growth" into every book. Seriously, they'll all about contamination of some sort. Though he's not a grue miester, he isn't afraid of painting some very dark images. When he ramps up the horror, it often explodes in some delirious imagery: worm infested troglodytes, mutated "zombies," sexually deviant satanists (naturally), and telepathic Nazi creations, just to mention a few.

Derek - No. The books do however have a rotating cast of very colorful characters that show up from time to time including a scientist and an explorer. There is no through-line between them (they show up at random and don't discuss previous events). However, Blackburn was a master of sketching characters. Even the most minor are filled with life.

I got all excited about Blackburn when I first heard about his work a couple years ago...it all sounded very much up my alley. I finally found a 1st ed. HC copy of one of his books -- THE SINS OF THE FATHER -- at, coincidentally enough, Will, Powell's in Portland. Much to my surprise and disappointment, I found it virtually unreadable for a variety of reasons. I don't know if this book is typical of the quality of his work or I just chose my first selection from him poorly, but SINS has not prompted me to seek out more of his work. I may give SINS another try before writing Blackburn off -- I gave up about a 1/3 of the way in -- but I must admit I'm not optimistic.

For what it's worth, my review of 'The Scent of New Mown Hay' at the PorPor Books blog is posted here:

I gave it 3 / 5 Stars. it was really more of a detective novel than a horror story. As a novel published in 1958, its horror content is rather subdued, and lacks the degree of gruesome explicitness that a rampant fungus requires to be truly disturbing.