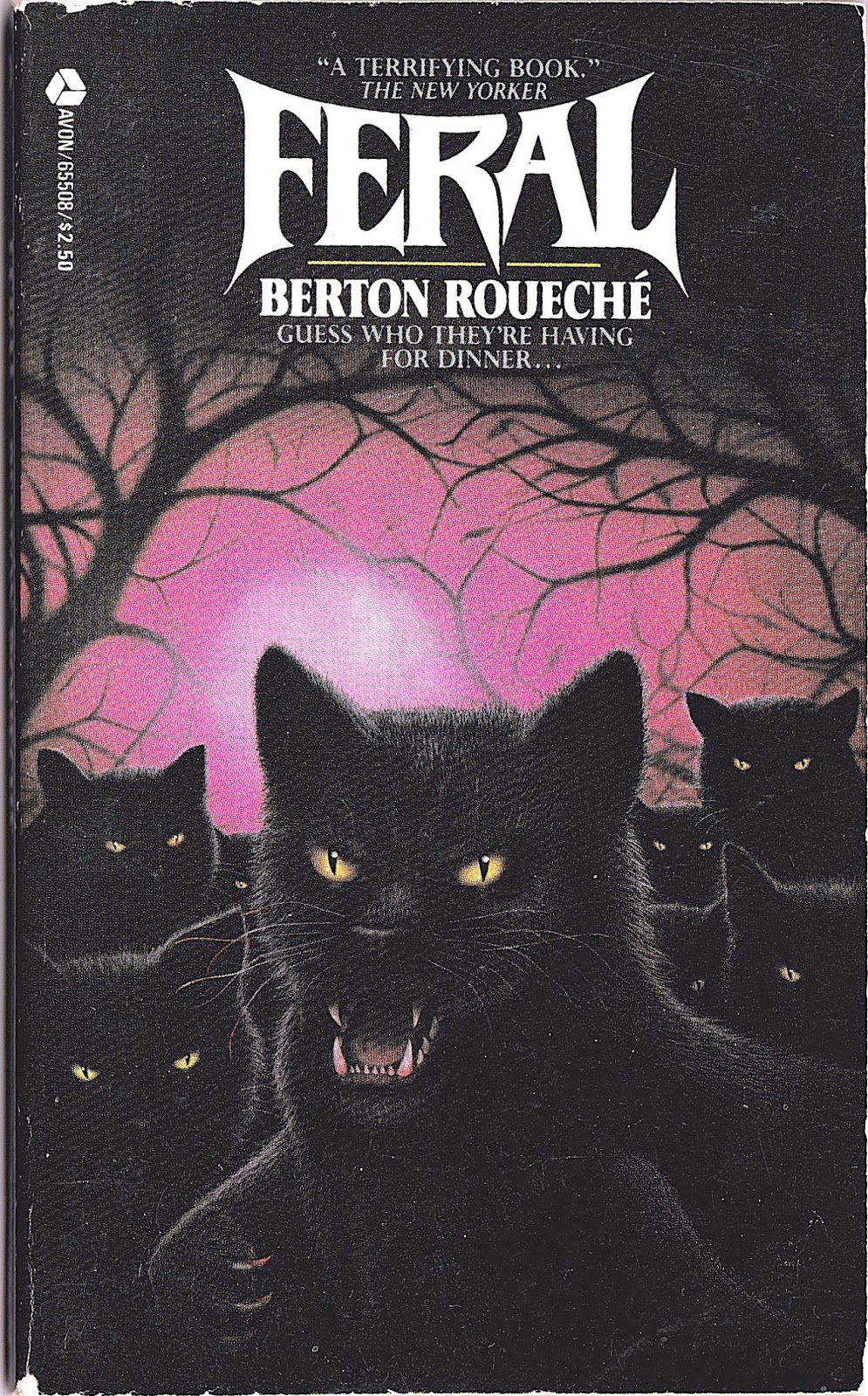 This sleek, efficient little thriller won't let go once it gets its claws in ya! I read Feral (Pocket Books, 1975/Avon reprint, 1983) in one lazy, sunny, mildly hungover afternoon, eagerly eating up every gruesome morsel Berton Roueché was serving. First time I ever heard of it was in King's Danse Macabre, in which he writes it's "one of that select handful [of books] that I have given to people, envying them the experience of the first reading." Indeed. Feral is a soufflé of a suspense/horror novel, barely 125 pages in paperback, offering light, satisfying entertainment with little cause for regret.  It's got some butt-clenching scenes of feline violence, but not too many, although you can still practically feel those claws slashing and razoring your flesh. Ouch. 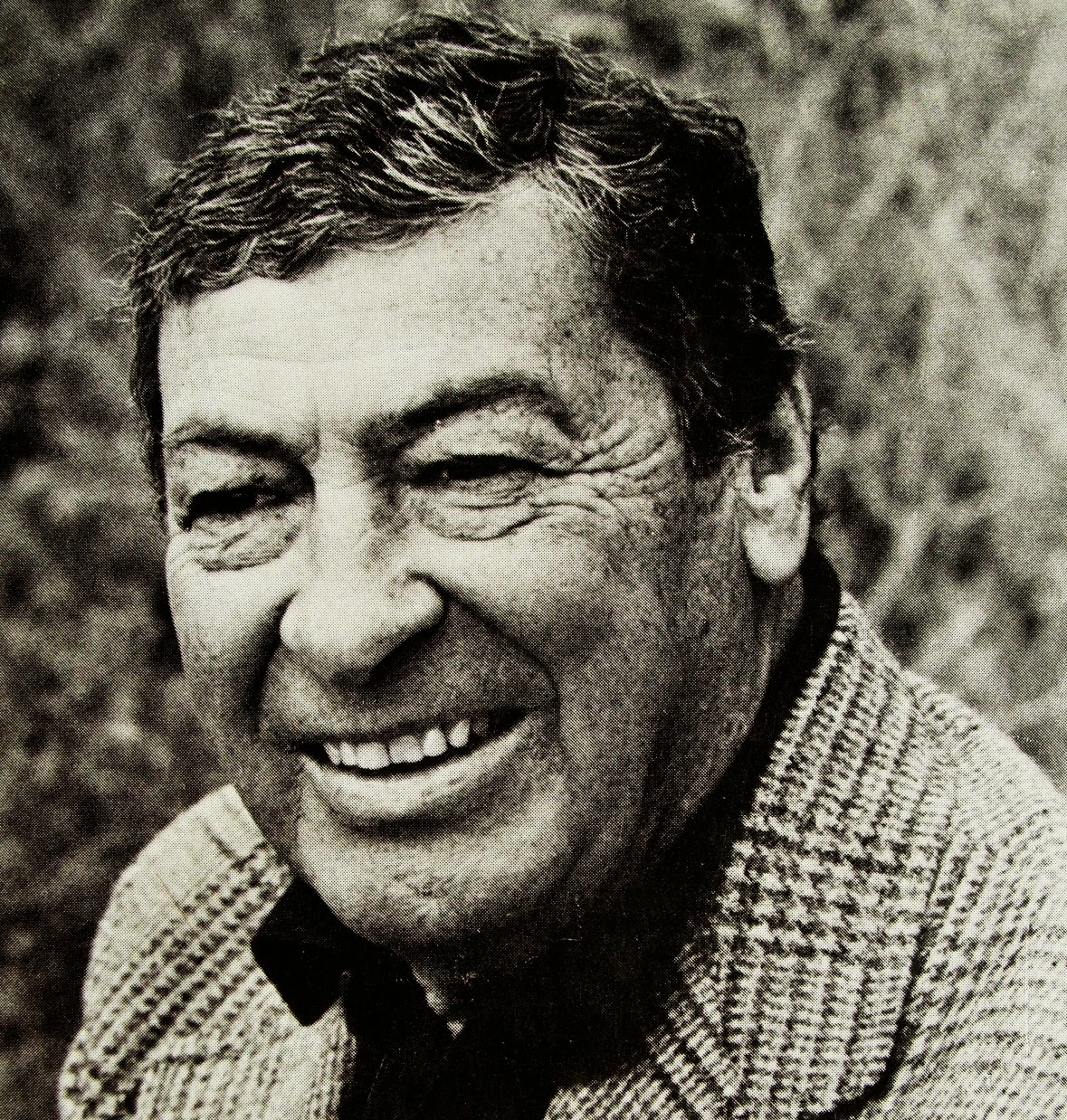 Boy, do I like horror novels written by people who know how to really write, and don't need to show off. Roueché was a writerly dude, employed by The New Yorker mag for 50 years, also penning medical mysteries, and one of those books inspired early episodes of the hugely popular TV show "House." Huh, whaddya know? His clean, plain, unencumbered prose is disarming, with a natural flow to it that's a pleasure to read, which lends a quiet believability to unbelievable events--even the characters can hardly believe what's happening before them.

Feral also gave me the kind of setting I enjoy more and more in my vintage horror, that of the vacation home in an idyllic locale--here, we're in Amagansett, Long Island (where Roueché himself lived), a little seaside community for the well-to-do. City folks come up for the summer, then head home as autumn arrives. The novel begins a bit like a travelogue as Jack and Amy Bishop buy a 1920s farmhouse near the ocean (but ick! There's a dead cat in the bedroom closet. Bad omen!). Turns out to be a huge mistake. 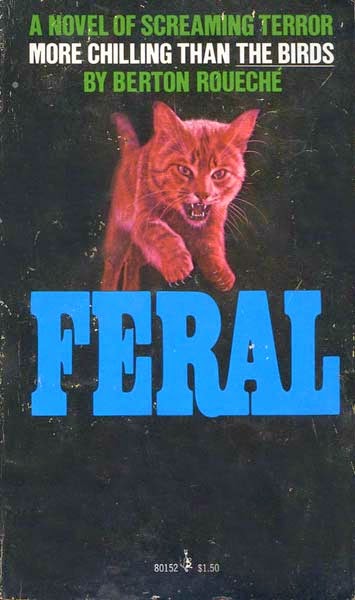 Many of those summer vacay-ers ditch new pets on the side of the road before leaving the town, unwilling to bring the animal with them into the city. I know it's pretty difficult to imagine today, but yep. In fact, the otherwise likeable Jack and Amy do the same thing with a kitten they're given, reluctantly, but Jack rationalizes to his wife, "What else can we do? We sure can't take her into town. That would be awful. She's a country cat. She'd die penned up in that apartment." So they drop it off near homes obviously inhabited with families, and hope for the best. We don't see little Sneakers again, but when countless cats are left roadside this way, what else can be expected to happen? They return to their natural state. This action also makes the couple complicit in the horror that's coming.

The next year, Jack and Amy come to like Amagansett and their home so much they decide to stay year-round, to the envy of their friends who have to work in the city (Jack is a science magazine editor). They find a stray dog and name it Sam, and at the vet's are given a guilt-inducing earful by him about vacationers who ditch their pets:

"But you can't exactly blame the cats. I'm more inclined to blame the people that put them there. I mean the folks that come down here for the summer and get a little kitten for the kids, and then when it's time to go back to the city, they dump it off at the side of the road. Sink or swim. And the trouble is, it usually manages to swim. Those people make me really mad." ... Amy gave me an anguished look. I knew how she felt. I felt a little sick myself... We hadn't just dumped Sneakers. Not really. And yet, of course, we had. It was just that we hadn't realized.

But they begin to notice cats around their home, while they're driving down a deserted road at night, then during the day, and not just one or two mangy strays; there are usually three or more, mistaken for dogs at first because of their size, and often seen gorging on dead animals in a field or by the side of the road. Locals begin commenting that no one can find birds to watch on the nature trails, and a stable owner notes he has no rats creeping about his property this season. The first real note of terror happens off-screen, as it were, when Jack and Amy hear of a friend nearby who's bitten by a stray cat she tried to feed and falls seriously ill... then dies several days later. One fall day Jack goes out to cut down a tree for firewood with Sam and:

I sensed a movement... it was a dirty white cat with a missing ear, and it sat watching me from behind a screen of lopped-off branches. There was something odd about its gaze. It was a natural look. It was too steady, too fixed, too tensely concentrated. It held my eye. I stared compulsively back--and saw another cat... the tumble of branches was full of cats. I counted seven. I counted eight of them. I counted eleven crouching cats watching me through the branches....

With his skilled pen, Roueché quietly ratchets up suspense here, and I swear I could sense those yellowy eyes glaring at me too. And Sam is nowhere to be found, so you know that's not gonna turn out well. 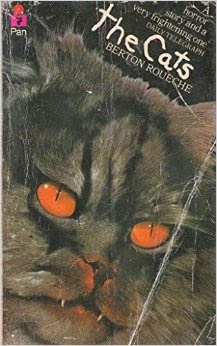 Jack casts around for help, accessing some scientific literature that's of little use, contacting the police department with the same results. They put him in touch with the dog warden, who doesn't know how to handle cats. He does inform Jack there's no law against shooting 'em, but Jack does not relish this idea. Still, he buys a small-bore shotgun: There was something about a gun. It made a difference. It made all the difference. I wondered what I would do without it. Even the thought of it was a little scary. Jack shoots a few cats but this only scares the others off for awhile, and they return, in larger numbers, their yowling filling the air at night. And then one day it happens: countless cats have flowed out of the woods and essentially have the Bishops trapped in their home. He calls the police for help, and they send one young lone rookie... 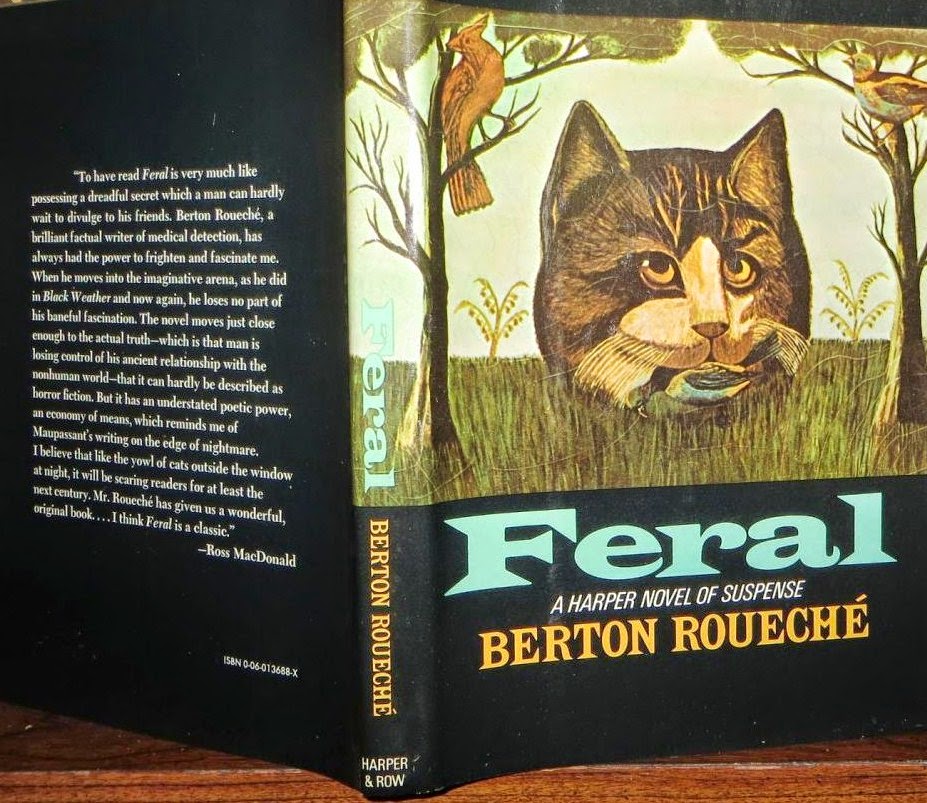 The final chapters are filled with a sort of despairing tone as the men of Amagansett fight the crazed animals, whose numbers seem to impossibly increase; one might think of James Herbert's The Rats, from the same year, but Roueché is a much more tasteful and restrained writer (no tawdry sex scenes here!) so the climax has no pulp hysteria, but it's still unsettling because it's matter-of-factly written--as I said, you can still practically feel those slashing claws, writhing bodies, piercing fangs. The subtle implication is that humans are at fault for this nightmare scenario, but the point is not belabored, yet it is obvious. The ending at first seems cliched but I think it speaks more to newfound paranoia than generic trickery.

Feral isn't a forgotten horror masterpiece or anything, but it's a gripping high point of the "animals gone amok" subgenre, and probably better written than any others. You can find copies for cheap and I definitely recommend you do. Set aside a free afternoon for Feral--but put Fluffy away first.

Another one that I've never heard of that has now made its way into my abebooks cart. Unlike a lot of the others you feature, I don't remember seeing this one on the shelves of the 2nd hand bookshops back in the day, down here in Australia.
Great work Will - this blog has become my reference for collecting and reading vintage paperbacks.

Well... Looks like I know what I'm buying all my cat lady friends for Christmas. Keep up the great work, Will.

Damn Will, you've gone ahead & positively made me feel like a TOTAL "geezer" with this review! LOL.
I distinctly remember acquiring that first paperback printing seen at the top of your piece at one of those school book fairs back in 9th or 10th grade in either 1975 or '76 & enjoying it for the most part. As I recall, a whole lot of other kids ordered it as well, so once everyone's order came in, there was a large group of kids all reading it at the same time, Leading to much discussion of it in the hallways, the cafeteria & even in classes among those students.
Which was definitely my earliest experience with a book club group read. At least as far as genre material that hadn't been assigned by teachers.
I actually LOVED the experience & had a great time with it.

Thanks for sharing Jim! Love that story.

I remember my mom checking this one out of the library in 1975 or so and her handing it off to me and my older sister to read when she was finished. I really enjoyed it as I recall.

Well this is baffling: I thought this was quite the mixed bag. Despite an imagination-teasing plot that’s handled well throughout (strictly in terms of the events portrayed), I thought the writing suggested minimal effort. I joked on Goodreads that I read it in two days, and that it was probably written in the same amount of time.

So to find that it’s this praised, even by Stephen King, and that the author was a half-century writer for “The New Yorker”... again, very baffling (and this is coming from a paid subscriber to TNY).

On a tangent… love that first cover, up there. Unfortunately the copy I found has that second, Meow-Mix-lookin’ cover.

"On a tangent… love that first cover, up there. Unfortunately the copy I found has that second, Meow-Mix-lookin’ cover."

...Hey, I love that cover! The reprint cover at the top is good, but its cat in the foreground looks like a puma, not the kind of mixed, mangy country strays that are in the novel.

An older cousin lent me this book when i was in high school. I was a huge animal lover. The book haunted me for a long time and i will always remember it. Brilliant writing!

I hope FERAL comes back into print one day!

Does anyone know who designed the cover at the top with the pink sky and black cat army in foreground? i can't seem to find out anywhere! its so good.