No Blood Spilled by Les Daniels (1991): Who Dares Love Misery 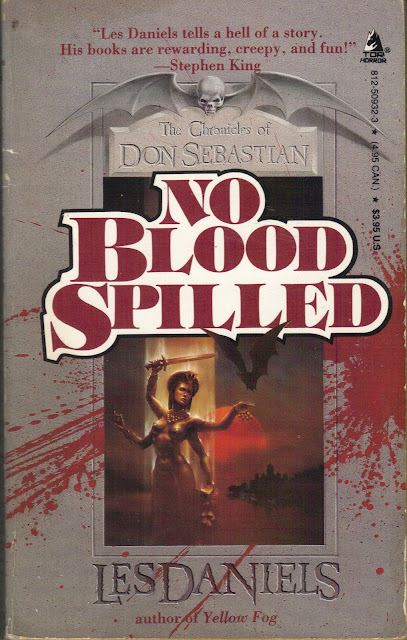 The fifth and last novel in the Chronicles of Don Sebastian - he's a particularly nasty and old-school vampire who goes by different names in different eras - No Blood Spilled (Tor Books Feb 1991) is actually the first novel I've read by Les Daniels. Unfortunately Daniels died in 2011, and while none of his books are in print today, he was a great chronicler of pop horror culture, having written the ambitiously-titled Living in Fear: A History of Horror in Mass Media way back in 1975. More, he's even considered the first historian of comic books, publishing Comix: A History of Comic Books even wayer back in 1971! That is just some awesome shit, I have to say. But the only stuff of his I'd read till now were his ghoulishly witty tales "They're Coming for You" and "The Good Parts," respectively, for two classic '80s anthologies, Cutting Edge and Book of the Dead. Daniels's friends and colleagues remember him fondly as the guy who knew it all but didn't act like a know-it-all and gladly, happily introduced them to the finest and funnest horror entertainment. This pic of him looking jovial pretty much says it all, I think: 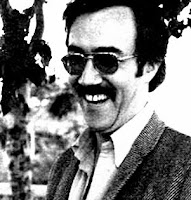 For more on Daniels, go here and here.

Set in a finely-detailed Calcutta during the 19th century when India was under British rule, No Blood Spilled is not very long, just over 200 pages, and moves efficiently from one vivid scene to the next in an almost cinematic fashion. Don't take this as a criticism: No Blood Spilled is plenty gory (so yeah, the title is kinda ironic), envisioning a meeting of two masters of macabre mayhem: the dread vampire and the Thuggee cult... and ultimately, the goddess of death and nothingness herself, Kali. As a diehard fan of modern classic horror works set in India like Song of Kali and "Calcutta, Lord of Nerves," can you blame me for reading this last volume first? 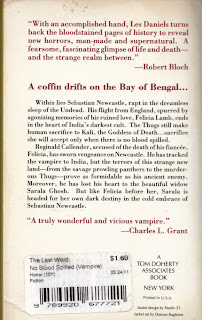 You can read the basic setup here on the back cover, but it doesn't capture the deftness with which Daniels paces his story, nor the characters he so easily brings to life (or takes to death). There's Callender, who tricks his way out of a British prison to track the vampire Don Sebastian de Villanueva, centuries before a Spanish nobleman but now known by the English name Sebastian Newcastle. Once in Calcutta Callender meets up with an old school chum, Lieutenant Hawke, now a cruel, ambitious military man intent on wiping out the last remnants of the Thuggee cult. Jamini is the young, wily street urchin who "befriends" Newcastle after rescuing his coffin from the sea. The silk merchant Kalidas Sen is actually a Thug leader addicted to cobra venom, and who sees in Newcastle perhaps an ally in the battle against the British. Or perhaps not. And of course there's the beautiful Sarala Ghosh, who finds herself caught between the living, the undead, and the divine... 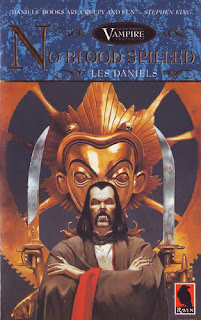 Daniels well utilizes the darker aspects of the Hindu mythology that features Kali, contrasting the vast murderous impulses of the Thuggee with those of Newcastle, murderous impulses that must not shed blood (their method of murder is strangulation). Newcastle is somewhat of a cipher, which I suppose is appropriate. I think Newcastle identifies with the bloodthirstiness of the goddess, her eternal power and might, and wishes to get as close to her as he can. A quote engraved on the Kali shrine in which Kalidas and his men bunker down in with firearms and gunpowder to battle the British:

Terror is they name, O Kali
And Death is in thy Hand
Who dares love misery...
And hugs the form of Death
To him the Mother comes!

Man do I love that stuff! The more dramatic and horrific set pieces could be descriptions of early 1970s cover art from Creepy, Eerie or Tomb of Dracula comics; you can tell how much fun Daniels is having with the tale, evoking horror tropes with real respect. Newcastle, clad in black while walking the night, tears off heads and drinks the jetting blood. Callender witnesses one awesome scene as he's stranded in the forest with Sarala, just as his horse has been devoured by a black panther. The animal, bloody-muzzled, nuzzles a familiar dark shape and purrs:


And as the moonlight carved shadows in the figures set before him, the scene began to change. Sarala, her sari still hanging from one hand, began to tear at Newcastle's clothes, while he writhed and twisted like a thing possessed... stripped to the waist, Newcastle dropped to his knees, his white back heaving and darkening as malignant growths sprouted from this shoulder blades and bloomed into gigantic leathery wings. Sarala clutched their clothing to her breast as the vampire embraced her, his great wings rippling like sails in a high wind, and suddenly they were aloft, dwindling in an instant to a black bat against the moon. 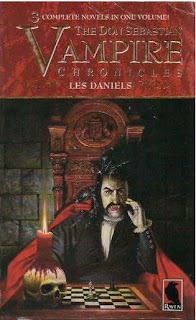 Man do I love that stuff! Throughout, Daniels writes in a lively, simple prose with plenty of wit mixed in with the violence and bloodshed. While it touches on some ideas of man's inhumanity to man that make monsters seem obsolescent, No Blood Spilled isn't weighted with moral concerns that may have bogged down The Vampire Chronicles or A Delicate Dependency. This approach results in a lightweight, yet highly enjoyable and unique vampire novel that truly satisfies and which I can recommend as serious horrific fun.

Your review has convinced me to pick up the first book in the series, The Black Castle, that has been sitting in my local bookstore for at least a year, but which has never really grabbed my attention due to my being burnt-out on vampires.

You're right, he does have a very "cinematic" style--fast-paced yet with vivid imagery that makes it hard to put down.

Thanks for the tip, I'm really enjoying it so far, though the humans in it are much more horrifying than the vampire so far. It IS set during the Spanish Inquisition, after all.

Daniels I think really wanted humans to out-evil his lead vampire! It's a cool idea. Glad you enjoyed the book. I've got 2 more on my shelves, but not the first one.

It's criminal that Les Daniels is not better-known in these days of "vampire mania." I always describe these books as what would happen if the Christopher Lee version of Dracula was placed in situations where he was the hero by default.