I had some high hopes for Dead Image, the second in the long-running horror anthology series Night Visions, published by the specialty line Dark Harvest. Everyone involved was writing good stuff throughout the 1980s: editor Charles L. Grant, of course, and contributors David Morrell, Joseph Payne Brennan, and Karl Edward Wagner. But those hopes were dashed pretty quickly, even with the very first story; suddenly I wasn't so excited about reading vintage horror fiction. Pick your critique: dull, lifeless, trite, half-hearted, corny, bland, old-fashioned. I haven't read a clunker like this in ages. Don't believe the back-cover copy: this is not a "landmark collection," and for the most part there is nothing original or nightmarish about the works contained herein. These "craftsmen" have done much better work elsewhere. 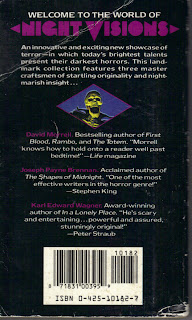 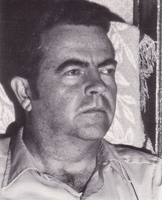 Recently I've read a handful of Brennan's short stories in various anthologies and enjoyed them a lot ("The Horror at Chilton Castle," "The Willow Platform," "Jendick's Swamp"). But when he's bad, his stuff is run-of-the-mill horror pulp relying on cliche and traditional "scares" and would barely pass muster for "The Twilight Zone" or "Night Gallery." His effective tale "Canavan's Backyard" from 1958 was rightly lauded highly by King in Danse Macabre. The sequel is here - "Canavan Calling" - and actually it contains my fave horrific scene in the whole anthology. "Wanderson's Waste" has its moments, but his others follow a threadbare template. 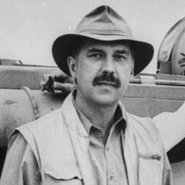 Ugh - Morrell's contributions are little more than YA fiction. "Black and White and Red All Over," reads like super lightweight King, and "Mumbo Jumbo" - well, the titles alone are coma-inducing. His title story is a riff on James Dean's legend, but it adds little and offers no insight to it, there's just a tasteless bit of gore for the punchline. 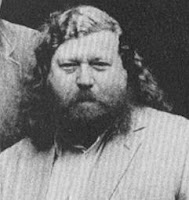 "Shrapnel," "Blue Lady, Come Back" and "Old Loves" are Wagner's efforts and if you want to read them, I'd suggest buying Why Not You & I?,  his 1987 collection that they also appear in. Wagner was a grand personality of '80s horror fiction, a giant both figuratively and literally, but I don't think Night Visions is his finest hour. The stories aren't bad, they're just okay. But Wagner's personal interests always come through in his fiction: "Old Loves" is geeky fandom gone awry, while "Blue Lady" - named after a creepy old waltz - involves academic rivalry and plenty of alcohol. "Shrapnel" made no impression whatsoever. 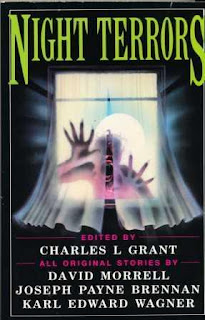 These stories are much too earnest and literal in their approach to horror, written in too obvious a manner, lacking either powerful imagery or prose. I really have to wonder what Grant was going for. In his intro he states The sound of horror is not always a scream, which is true, yes, but Night Visions is pretty much a yawn.
Posted by Will Errickson at 5:30 AM

I'd have to respectfully disagree. I've found the NIGHT VISIONS series to be far more uniform in quality than most series (excepting perhaps the BORDERLANDS series), and Morrell, Brennan, and Wagner are all remarkable writers. Granted, it's probably been a couple decades since I've read the collection, but from what I vaguely recall, it was quite good. As well, I find it hard to imagine that those two features -- uniform quality and outstanding writers -- came together to form a clunker. I might have to give it a revisit to see if my memories -- and assumptions -- are playing tricks on me.

It was so nice to see someone namecheck Brennan's excellent "The Horror at Chilton Castle." I can still remember reading that when I was in first or second grade and it's stuck with me to this very day.

Ron - it's that "couple decades" that gets me. Had I read this volume when I was a teenager 25 years ago I may have enjoyed it, but today I found the stories very mild and weakly written for the most part. Perhaps "clunker" was the wrong word. But all three writers have stories I really like... they're just not in DEAD IMAGE. And one of these days I will get around to reviewing those BORDERLANDS anthologies...

Alejandro - yes, I read it in Ramsey Campbell's FINE FRIGHTS: STORIES THAT SCARED EVEN ME. Good stuff!

Will, I'll certainly grant you that -- stories that impressed me twenty years ago could certainly fail to do so now...not because they've changed, of course, but, as you suggest, because I as a reader have.

Hey Will, I'm fairly new to your blog, but it's a fantastic resource--I'd ever have heard of the majority o these titles if not for you. Keep up the good work!

I appreciate it, Angry - that's what I like to hear!

I think that quite often Grant was just publishing whatever his pals sent to him on the latest anthology that he was editing. The quality of his anthologies are generally high, but sometimes they're just plain awful. I do have the NIGHT VISIONS anthologies. I found that some of Grant's other anthologies are superior to those...mainly SHADOWS. DEATH is a really good one, often overlooked.

James, you're probably right. I loved the first volume of SHADOWS and reviewed it here last year. Pretty sure I've got DEATH somewhere on my shelves as well.