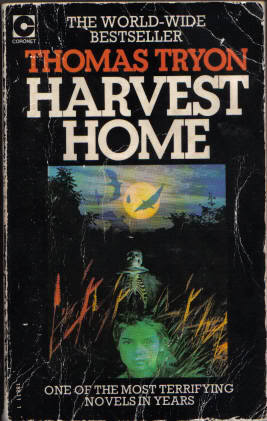 Author-turned-actor Thomas Tryon wrote two of the best of pre-Stephen King horror bestsellers of the early 1970s, The Other (1971) and Harvest Home (1973). Here are the UK paperback editions; you can see the US editions here. If you haven't read 'em, get to it! Such chilling delights. 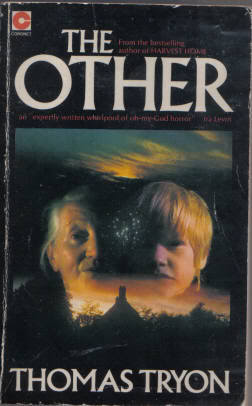 They were also made into movies, of course, the former title I've seen, while the latter was made for TV but still starred Bette Davis. Creepy kids and malevolent old ladies...

Posted by Will Errickson at 5:47 AM

Ooooh. These look like good old fashioned, nostalgic reads. I'm not at all familiar with Mr Tryon, but I'll be keeping an eye out for his work in my local second hand book shop. Thanks for the heads-up!

just bought a hardback ed of Harvest Home... it's next on my list...

I've read THE OTHER and have tried to read HARVEST HOME. Both novels are among the worst books I've ever struggled through. I've never understood the appeal, at all.

I loved 'em both, maybe HARVEST even a little more, but I did read them when I was in high school...

Anybody read Night of the Moonbow?

Ditto, Will -- that is, I read them both in high school & thought very highly of them.

The movie adapatation of THE OTHER I was lucky enough to see in a drive-in, as it happens.