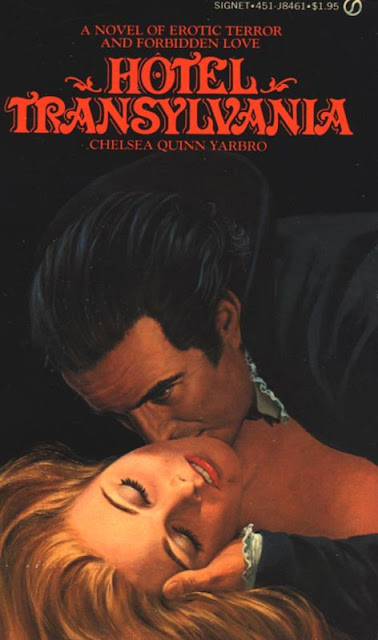 Must plead complete ignorance of Chelsea Quinn Yarbro's long ongoing series about the Count Saint-Germain, a vampire she based on a real-life personage of dubious nature; I haven't read a word of them. However I find the cover art an intriguing mix of sweeping historical romance and traditional Gothic/vampire horror imagery, the whole heaving breasts and ripped bodices thing, and tall, dark, vaguely threatening men in full Lugosi-style vampire garb (cover artist unknown). 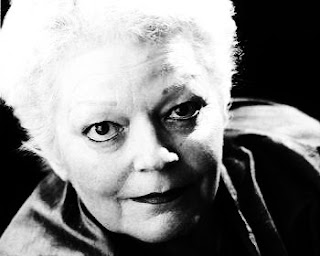 The prolific Yarbro began the Saint-Germain story with 1978's Hotel Transylvania (Signet paperback, Jan 1979) which takes place in the court of King Louis XV. Next was The Palace (Signet Dec 1979), set in Florence during the Renaissance. Blood Games (Signet Sep 1980) goes all the way back to Nero's Rome, while Path of the Eclipse (Signet 1982) has the Count under the 13th century Mongolian reign of Genghis Khan. Finally we get to the 20th century with Tempting Fate (Signet Nov 1982), in which the Count witnesses the rise of Nazi Germany before WWII. Whew. Epic. 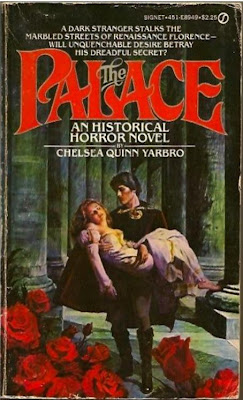 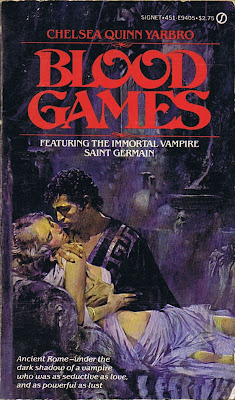 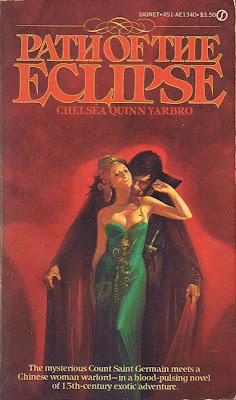 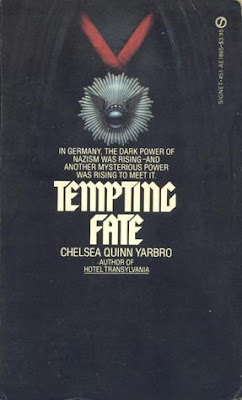 Not sure which audience the publisher wanted to snag, either: the ever-discerning fans of Kathleen Woodiwiss and Rosemary Rogers, or the Anne Rice crowd - but since Yarbro's vampire "reimagining" predates Rice's, there might not have been a huge horror fiction fanbase for such books. So I wonder if these were shelved with the romance novels or the horror novels? Burning questions for all the ages, no doubt.
Posted by Will Errickson at 7:11 AM

To answer your particular "question for the ages" my dear pal Will, you need just ask a lifelong horror fiction fan with a decade or so on you. That being me , of course.
As I recall, all Yarbro's books could be found in the horror section. Not that I ever purchased any of them myself. The whole vampire romance thing didn't appeal to me then any more than it does now.
Actually, the only book by Chelsea Quinn Yarbro I ever bought/read was her novelization of the early '80s minor classic DEAD AND BURIED. Which, I actually enjoyed quite a bit, but sadly, none of her other genre novels ever appealed to me. So, that was it for me.

Ah yes, her DEAD AND BURIED - always lots of copies of that around. I liked that flick, gory early FX by Stan Winston.

The Count Saint-Germain novels were an acquired taste. They are heavy on romance, and the vampirism in them is muted and more sexual. He seems to be too good to be true and all the ladies swoon around him.

In the late 90's Chelsea Quinn Yarbro wrote a series of novels about the "Brides of Dracula" called "Sisters of the night", the three vampire woman who appear in the original novel. The vampirism in these novels is totally removed from Saint-Germain, more traditional if you will. Dracula is quite pitiless in these novels, not a ladies man like Saint-Germain. The back story on the "brides" are quite interesting.

Unfortunately, only two novels were published, as the publisher was acquired by another firm and the third book was never published.

I was reluctant to try the St. Germain books at first because they are known for being "more history than vampire," but they are excellent. Yarbro's writing actually made me feel like I met some of the historical figures who pop up in her books. FWIW, Yarbro herself considers the books to be horror because of the actions of the all-too-human villains.

Robert - As my blog cover image attests, the Brides of Dracula are 3 of my favorite characters in horror! Didn't know Yarbro wrote about 'em. Thanks!

Derek - Sounds good. You should check out Kim Newman's Anno Dracula if you haven't; it's the best historical horror novel I've ever read!

That SISTERS OF THE NIGHT series sounds very interesting. Three questions, though:

*Are the first two books still in print and available in stores?
*Was the third and final book a case of "finished but never published"?
*Will said third book ever be published, has it already been done by now, or if it hasn't been, will it be done in the future?