The Desecration of Susan Browning by Russell Martin (1981): Lost Her Soul, Doomed and Cold 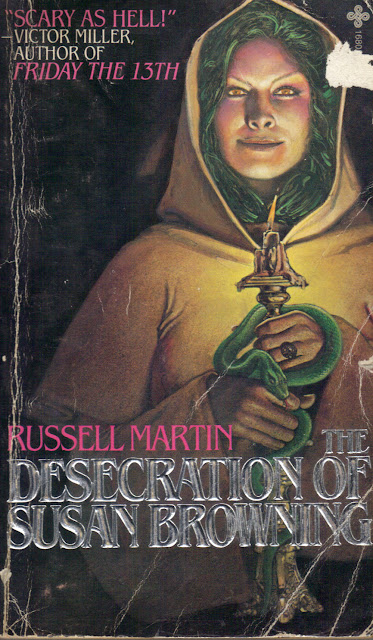 Featuring the least impressive of cover art of Russell Martin's books from Playboy Press, The Desecration of Susan Browning is a decently agreeable paperback original horror/erotic thriller. With liberal dashes of titillation, a stale if well-handled and mild "satanic" cult angle, painfully dated gender stereotypes, it's written pretty good with a bit of a knowing wink. Nothing too special is going on - it's certainly not "scary as hell!" -  but Martin keeps the storyline hopping with the promise of illicit sex and sacrificial death; me, I liked the sleazy detective playing both sides just so he can get a little girly action. By the time poor hapless Susan Browning finds herself lying on a cot in a freezing room, shaved bare from the neck down, awaiting the unthinkable at the hands of a powerful and mesmerizing occult leader, you'll swear you can't wait to read Martin's other books. Or you'll at least add them to your ever-growing "must-read" list. If you want more Desecration, check out this in-depth review at William Malmborg's blog.
Posted by Will Errickson at 6:00 AM

A fun little read; much better than I thought it would be when first opening it. I really liked the sleazy detective as well. That character made the book in my opinion. Many thanks for linking to my review.

I tried "The Obsession of Sally Wing" but couldn't finish it. There was some death-by-sex early on (OK), an abused-wife scenario that was kind of unsettling, and I checked out when Ms. Wing started torturing a child. It wasn't a sexual scene, but I think some kind of soul theft based on fear. Anyway, my bar is set very low, and this one still left me queasy.

Reminds me a bit of Richard Laymon, although Laymon was a better writer. Maybe I'll try this title, though.

Speaking of torturing a child- have you read : GRIM MEMORIALS by Patrick Gates? DANG! Concerned an evil modern day witch that tortured and ate children a la Hansel & Gretel. But waaay to graphic for my tastes. One of the only horrors I had to put aside for being actually too horrible! I just didn't see any reason for it's existence. And I can go pretty low too! I mean-I've read Ketchum's, The Girl Next Door! Of course Ketchum is a compelling writer with a unique voice. This Gates person-uh, is not.

Grates wrote - or rather "wrote" - one of the worst books I've read & reviewed on TMHF, a truly dumb tome called FEAR (oooh! such a title!).