Love from beyond the grave - it's a common theme in horror fiction. Emotional bonds made during life, our superstitious forefathers thought, surely cannot simply disappear when one of the lovers dies; that powerful and undeniable connection with another must carry on even into eternity, right? Well, yes; the person living still carries that torch - we all love people who've passed on - but what about the lover who dies? Do their emotions continue on? Well, I seriously doubt it myself, but Bernard Taylor's second novel, Sweetheart, Sweetheart, utilizes this aspect of the genre to pretty decent effect, creating a female ghost who likes her men... a lot.

Ghosts often seem to be made not of ectoplasm and smoke and the like but of actual human emotions like love, like hate, like jealousy and possessiveness. The places they haunt are redolent of their strongest passions. Most of the horror fiction I've read has actually not been in this area, just as I haven't read a lot of satanic possession stories. I find it - them - quite old-fashioned. They are, but they can still be effectively creepy. Sweetheart, Sweetheart is that. I don't know if I agree with Charles L. Grant, who chose it as his selection for the 100 greatest horror novels, but with his love of subtle moods and shadows I can see why he so admired it. 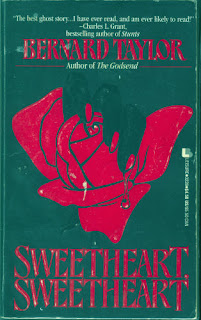 Mostly set in a cozy cottage in the English countryside, Taylor carefully details the homecoming of David Warwick, who had been living in New York City for years until the deaths of this twin brother, Colin, and sister-in-law, Helen, bring him back. They had lived in the cottage; Helen died horribly falling off the roof trying to rescue her kitten while Colin died in a vicious car wreck days later. David takes up residence there and over time meets the quaint locals who are the tiniest bit taken aback seeing as how he's Colin's twin. He meets Jean, the hypersensitive caretaker for the cottage; her father knows some of the secrets from the cottage's past.

There are a few sad, touching moments as David grieves for his brother, with whom in recent years he'd not been close, and especially when he sees the remains of the car he'd been driving in the crash that killed him. As he learns more about Colin and Helen's lives at the cottage, he also seems ambivalent about his girlfriend Shelagh back in New York as well as his emotionally-stunted elderly father, who resents Colin's final attempt at reaching out to David. The mystery deepens as David learns more about the cottage's previous tenants and their unfortunate demises. Then there's the body he finds buried in the garden. And the spirit that so obviously stalks the halls... and David's bedroom. 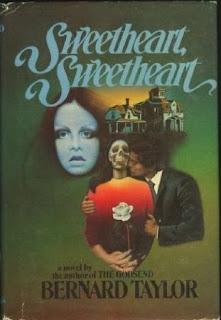 Like a lot of ghost-haunting fiction Sweetheart takes its own sweet time getting to the good stuff, as it were, trying to build suspense and discomfort - although honestly even that stuff doesn't get going until nearly the halfway mark. But once it does it doesn't let up. Read carefully in the first half; I didn't - I almost didn't finish the book, it has such a leisurely build-up - and so when everything is falling into place near the climax I had to flip back to figure out some characters' relevance. I really did like the horrifying culmination, sad and bloody and shocking as it was.

When I first saw Sweetheart's hardcover art I knew I had to read it - a '70s dude nuzzling a skull-headed woman, awesome! The Ballantine paperback from '79 is the edition I read, which at first glance seems a romance but then you realize the letters are stylized blood; the glaring eye of the madwoman is pretty wicked too (thanks to artist George Ziel). I don't get why both depict mansions; it's definitely a cottage that the ghost-lady is haunting. And that is one dirty ghost-lady, David finds out, who knows just how to keep the men in the cottage from ever leaving. Ever.
Posted by Will Errickson at 2:36 PM

Another one that sounds interesting. I think I really am going to use your blog as a Christmas suggestion book list this year. So many authors and books I've never heard of despite my love for horror fiction.

Cool! All these books are definitely available used through Amazon if not in an actual used bookstore.

Naughty female ghost? Sounds fun! The hardcover version is quite fabulous but the top cover probably would have scared me off had I not read the plot summary. It's got that Harlequin romance feel to it.

I should have known you've read this. I found this original hardcover in my parents' basement along with a stack of ex-library books. Bored, I started reading. I finished it in a weekend. I kept being drawn into that delicious "Cathy and Heathcliff" place. Not frightened so much as tempted. Oh, just allow me to wander through the dark hallways, hear whispers and dance around death. I don't know why this book made such an impression on me. I've never forgotten the place it created or how I dreaded leaving.