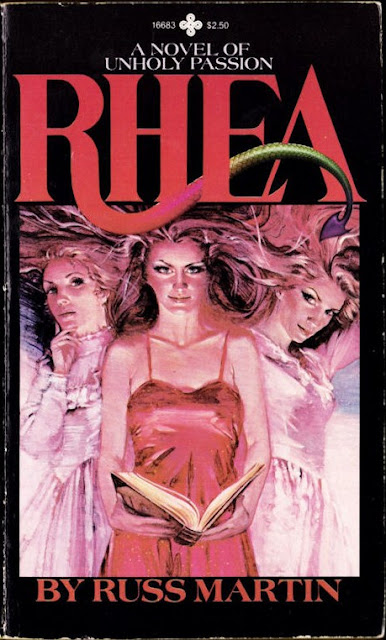 Now discovering this kind of horror paperback cover art is why I have this blog! Russ Martin is a name unfamiliar to me; none of my Google-fu turned up anything about him whatsoever, and even his bibliography is scattered and uncertain. I unknowingly featured his 1981 novel The Desecration of Susan Browning awhile ago here; I simply had no idea Martin had an entire series of erotic-satanic-cult-horror paperbacks back in the day - how wonderful! In all my bookstore jaunts I don't think I've come across one of these. You can bet if I do you'll be hearing all about it...

Above is Rhea, his 1978 novel, published in paperback in 1980 by Playboy Press. Utterly fantastic! Vintage-y lady of many looks draws you in, probably seals your doom but not before draining you of precious bodily fluids. One would hope. Love the reptilian tail trailing from the R...

Hello nurse! I really need to know what happens between The Devil and Lisa Black (1982). The bloody fingers thing has got to be some sort of fetish. 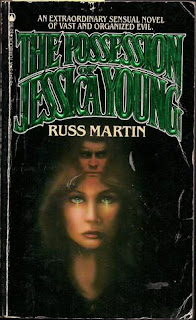 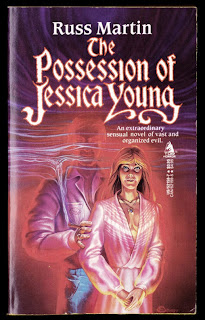 Tor Books started publishing Martin in the early 1980s and reprinted them in '88. You can see how paperback horror cover art changed during that time in the two editions of The Possession of Jessica Young (1982). I'm not crazy about either one, though; is the woman supposed to look threatening, or threatened, or what? 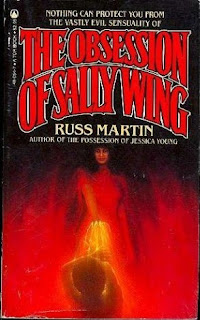 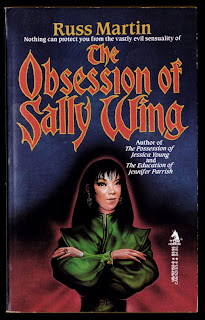 From 1983, The Obsession of Sally Wing. "Vastly evil sensuality"! Well alright. The cover from '88 makes the white liberal in me feel a mite uncomfortable. 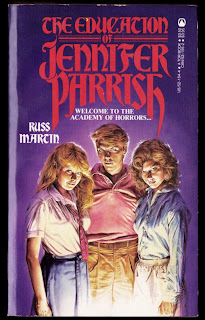 1984's The Education of Jennifer Parrish. Now this is some '80s preppy shit. (What was it about the '80s and preppies anyway?) Look at that hair! I get a real "Silver Spoons" meets "The Facts of Life" vibe, maybe some Less Than Zero too. These kids don't really look all that monstrous though once you really look at them.

Be sure to read this guy's short comments on Martin's books - he loves 'em all. Anybody know these books? Are they really worth tracking down? Please, spill!
Posted by Will Errickson at 1:51 PM

JR Parz has some fun obsessions.

I read a few Russ Martin's and enjoyed them. I like the link to the asstr sub-site. I used to visit the newsgroup quite regularly. I can relate to the writer insisting on there being sex in the stories. I was always puzzled by King's lack of sex and perversion. It didn't ring true. The Brits -- Herbert, Smith, Hudson -- always had very HOT sex scenes. Herbert has one of the great lesbian scenes of all time in THE FOG. There is a doozy in THE RATS, too (p.68 of the NEL edition from memory). A snapper in NIGHT OF THE CRABS also. It was good to find Yanks like Laymon and Lee thrusting their way into the sexual material. Great post, Will. Always of interest to me.

These look like a lot of fun. I'm going to have to try and get my hands on a few. Great post.

The first two covers are the best - really outstanding stuff - and then the cover art quality lessens. The craftsmanship on The Education of Jennifer Parris is very good however but the preppy horror subject matter leaves me flat.
It seems to be a genre staple in these kinds of novels (and movies too) to have the main character's name as part of the title. Other examples: The Initiation of Sarah, The Possession of Joel Delaney, The Haunting of Molly Hartley.

Tim - I didn't look at Parz's entire page before I linked to it. Ha ha ha! Wow.

Phantom - I think King has always been somewhat uncomfortable with overly graphic or "perverted" sex like many a good American boy raised in the 1950s.

William - Good luck! Lemme know if get any.

Russ Martin is a name I've not heard of before now. Judging by the covers alone, I should put him on my watch list when perusing used-bookstores. Cool post, man.

I'm a huge fan of Russ Martin's novels! Problem is, I cannot find any information on him. Anyone know how to find info on this author?

Russ Martin really loved the "The X of Y" title format, didn't he?