The Exorcist by William Peter Blatty (1971): Begat Your Cunting Daughters 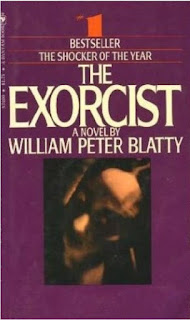 From the cab stepped an old man. Black raincoat and hat and a battered valise. He paid the driver, then turned and stood motionless, staring at the house... standing under streetlight glow, in mist, like a melancholy traveler frozen in time. 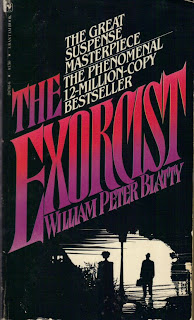 The preeminent 1970s bestselling horror novel. Millions of copies adorning nightstands and coffee tables everywhere. The unfocused cover photograph of a young girl in torment. The exotic, sibilant title--exorcist--why, the word itself sounded evil. If you were of an impressionable age at the time, surely the iconic imagery of the book alone made a nightmarish impact, even if you didn't read it. Perhaps even more so, because I'm not even sure The Exorcist, the fifth novel from William Peter Blatty, is a horror novel. I know, I know, that old argument: what makes horror fiction, well, horror? The Exorcist has some of the most infamous moments of shock and terror in popular culture, but is horrifying readers its sole raison d'être? I'd argue non. 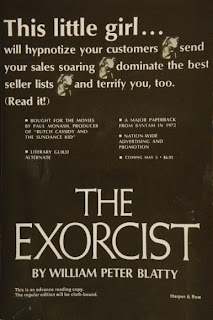 Vastly influential in the genre, as paperback horror shelves started filling up with books adorned with endless possessed little girls in frilly smocks and Mary Janes, The Exorcist helped make satanism and the occult everyday notions. With relish fans ate up stories of innocent young women defiled, but in the end, saved. But the book bears little relation to literary horror before it. Somehow I don't see Blatty tucked up in bed with a worn volume of Poe or Lovecraft or Machen or the like. His forebear really seems to me to be Dostoevsky, or at least Crime and Punishment. Take Lieutenant Kinderman, the movie-loving detective. The way he tries to disarm, misdirect, and placate in his questioning to get to the truth reminded me, if I recall correctly, of Petrovich, the detective from Dostoevsky's classic. And without a doubt, Blatty's concerns bear similarity to old Fyodor's lofty theological notions of guilt, forgiveness, love, etc. 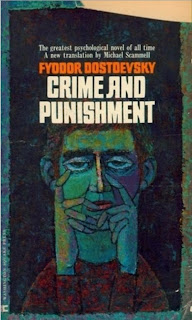 But no matter how lofty Blatty's intentions, he hasn't written a tract or a treatise; no, you just cannot stop reading; this fucker moves. At times it's thoughtful; other times it's brooding; still others, cranked up and hitting on all cylinders, smooth, confident, powerful. What struck me first was how Blatty tells his story like a journalist. The early scenes with Hollywood actress Chris MacNeil, renting a home in the DC neighborhood Georgetown while she shoots a movie, and her 12-year-old daughter Regan seem like a setup for a nonfiction piece. The slow build is pretty outstanding: the noises in the attic, Regan's casual mentioning of Captain Howdy or of her bed jumping around, a mysterious book on witchcraft that appears and disappears. The word exorcism isn't even mentioned till exactly the halfway point. 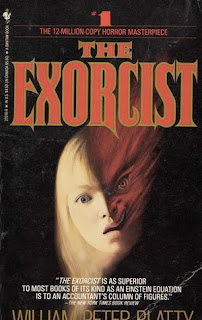 Yes, The Exorcist is much better written than I'd expected; compared to other bestsellers of the era that became movies, such as Jaws or The Godfather, it's positively a literary masterpiece. Blatty lays down a bedrock reality with a professional's writer's conviction and authority, which sells the outrageous tale; he's a storyteller who knows that in order to buy the impossible, the possible must be undeniable. He wisely makes much of the psychological/neurological explanations for Regan's ghastly and inexplicable behavior... until that becomes untenable. Denying Regan has become possessed is more ludicrous than thinking she simply has a physiological disorder; now the rational answers from doctors and psychologists sound like mumbo-jumbo: split personality, psychosomatic, epilepsy, autosuggestion, temporal lobe, neurasthenia, electroencephalograph, clonic contractions... 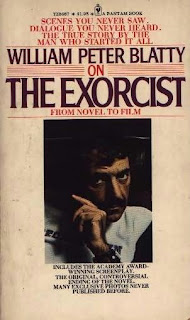 Then there's the famous prologue, with old (unnamed) Father Merrin on an archaeological dig in Iraq, which seems to imply, upon later reflection, that Regan's possession is incidental; Merrin and the demon Pazuzu have been on a collision course for who knows how long: Abruptly he sagged. He knew. It was coming... But darkly-natured Father Damien Karras has his own battle: his overarching guilty conscience about being unable, as a priest with a vow of poverty, to provide a comfortable living for his ailing mother. His childhood was grim, hand-to-mouth: He remembered evictions: humiliations: walking home with a seventh-grade sweetheart and encountering his mother as she hopefully rummaged through a garbage can on the corner. That's one of the most vivid descriptions of shame I've ever read. 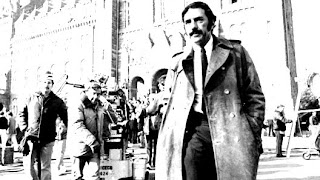 Ultimately, The Exorcist isn't about the nature of evil, it's not about violence and its legacy, it's not out to chill us with intimations of our own mortality, as all good horror fiction should; it's about the corrosive power of guilt and the redemptive qualities of love, wrapped up in an irresistibly glistening package of vomit, bile, foulness, and blood. It's an essential read, but whether all that makes it a horror novel or not is between, well, you and you.
Posted by Will Errickson at 7:55 AM

Great review Will. I agree that it cannot be squarely lumped in the traditional horror category, but I think that's what makes it so good.-JB

I remember when Satanic Panic stories were so very popular - even my ultra-conservative folks were freaked out by stories of young women defiled. Add that THE EXORCIST was supposedly based on true evens - welcome severe anxiety.

Well put, all of it, as usual. I should pull this one down off the dusty shelves after all these years. The story never fails to resonate.

Good stuff, Will. As you may or may not know, Blatty is a big admirer of Dostoevsky, and never had any connection, either as a writer or a fan, of horror fiction prior to THE EXORCIST. So you're on to something here.

It's an interesting companion to THE NINTH CONFIGURATION, as both seek to prove the existence of God through questions of morality, but come at it from opposite directions.

Thanks, guys! I know Brothers Karamazov was referred to in Blatty's Legion. And I've recently bought a copy of Twinkle, Twinkle, Killer Kane, which was later rewritten as Ninth Configuration.

With all due respect, I feel the need to add a dissenting opinion. While I agree that The Exorcist is nontraditional for its genre, I also disliked it quite strongly. It was assigned reading for a college class last summer, and the book looked short enough to pack into a day's worth of reading, so one July night I read it from start to finish. I hated it...not because it was disturbing, but because of the author's heavy-handed moralism and strawman arguments.

Maybe The Exorcist just isn't for staunch atheists. Then again, I laughed my way through the movie adaptation, so I did extract some enjoyment from the product after all.

Oh, I'm as staunch an atheist as they come, and I sorta knew what I was getting into with Blatty. Linda Blair has said that, as a mild Methodist child, she didn't even think people *believed* in the devil or in possession, and thought she was playing a monster just like Dracula or Frankenstein's monster! That's the way I looked at both novel and film. I'd say "pretentious" is a word one can apply to both Blatty and Friedkin.

Great review, Will. So great, in fact, that I chose it as one of my favorite posts from April and included a link to it in the latest "issue" of Spatter Analysis.

In Danse Macabre, Stephen King wrote: "two novels of the Humorless, Thudding Tract School of horror writing are Damon, by C. Terry Cline, and The Exorcist, by William Peter Blatty - Cline has since improved as a writer, and Blatty has fallen silent... forever, if we are lucky."

If memory serve, this is one of the few, perhaps the only, really sharp barb King aims at a living writer in Danse Macabre. I've always been taken aback but what seems a rather gratuitous nastiness on King's part here.

Anyone know if there's a backstory to this comment? Did Blatty high-hat King at some horror convention or something?

I think King may have been looking at Blatty's work solely in terms of horror writing, and found him lacking. Which may be true. But as I noted in my review, I don't think Blatty was even concerned with writing a "horror novel," so King's criticism seems to me a bit misplaced. I love DANSE MACABRE, but King isn't always accurate...