Revenge of the Manitou by Graham Masterton (1979): If the Kids Are United... 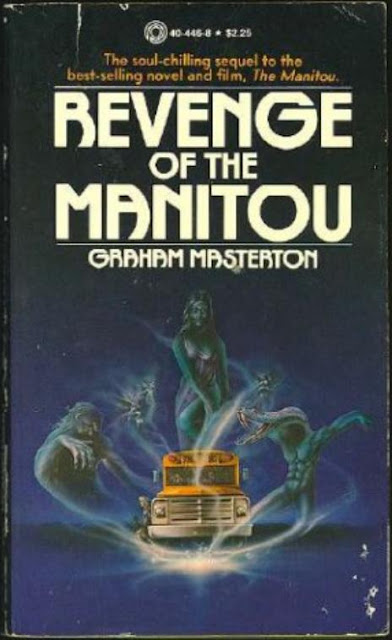 It's no surprise that after the success of his debut horror novel The Manitou in 1975 that Graham Masterton would want to return to his Lovecraft-inspired mythology of Native American medicine men and their attempts to wreak vengeance on the evil, plundering white man. Invoking the unpronounceable names of inhuman gods and demons from the great beyond, these powerful priests are virtually unstoppable, and can reincarnate themselves in unsuspecting humans almost at will. Perfect for sequelization! Revenge of the Manitou (Pinnacle 1982), however, is not that perfect sequel. I felt it lacked the eyebrow-raising absurdity of the original novel, its sense of fun and menace as it dispensed with rational believability in the service of a ripping horror yarn. Revenge was all too easy to put down for a day or two, as it retreads ground already covered in the original, and doesn't really bring any unique characters to the proceedings. 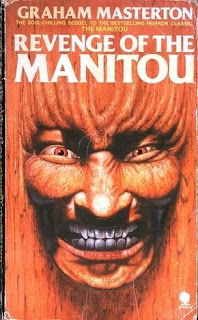 The story has plenty of potential: a boy named Toby Fenner begins to freak out his parents when he and his classmates start seeing ghostly apparitions, having nightmares, drawing horrendous pictures in crayon, and speaking in guttural voices about nonsense like "the day of dark stars" and "the prophecy buried on the stone redwood." Cue more mysterious and deadly occurrences that convince the boy's father, Neil, that his son is being controlled by the dread Misquamacus, the most powerful medicine man, like, ever. He, and 20 other great old Indian medicine men of enormous occult skills, have taken over the bodies of Toby and his young friends in an attempt to call down, using all their combined powers, those amorphous entities of darkness and tentacles (the most fearsome of which has the oddly familiar-sounding name of Ka-tua-la-hu) that will demand the blood of the white man for all his destruction of the Indian way of life. Masterton puts it all too plainly:

The day of the dark stars begins at noon and lasts through to the following noon. It's supposed to be 24 hours of chaos and butchery and torture, the day when the Indian people have their revenge for hundreds of years of treachery and slaughter and rape, all in one huge massacre. 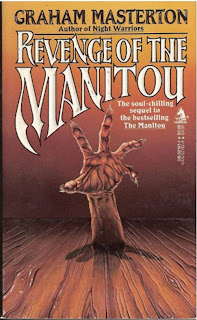 Uh-oh. Mostly the novel feels a bit half-hearted and even under-written in places, although things pick up with the return of that sham occultist Harry Erskine (and I now see a bemused, cynical Tony Curtis in my head after watching him as Erskine in the movie version of The Manitou) and his pal Singing Rock, the modern-day medicine man who uses his powers for good, you know. The lurid cover of the Pinnacle paperback at top (by Paul Stinson) depicts the climax: a schoolbus on a treacherous bridge with the possessed schoolchildren battling it out against Erskine, Fenner, and Singing Rock, as well as a bunch of unfortunate cops and National Guardsmen (the usual expendables). The climax is violent and grotesque, but simply not as exciting as the original novel's; as I said, seems too much a retread.

If you're a Masterton completist you've probably already read Revenge; if not, I'd say you could maybe skip it. However, I'm still eager to read his other titles like The Djinn, Picture of Evil, and Pariah, but I think I'm done visiting with the likes of Misquamacus. As Tony Curt--I mean Erskine hilariously understates at the end, "I don't want to meet that goddamned Misquamacus again as long as I live."
Posted by Will Errickson at 3:06 PM

I've never read this but did enjoy the original. Still I enjoy Graham Masterton and may give this one a try.

Isn't this the one with the showdown with "Cthulhu" on the bridge? I'd say definitely don't skip it, especially given it's a relatively short novel. Hell, even half-hearted Masterton is often more entertaining than a lot of the dreck from the period.
Burial is the next Manitou novel, and it's definitely better (and much longer). Then there's Manitou Blood - which is reasonably good, but suffers from the Manitou aspect feeling tacked on and rather unnecessary. In fact, being rewritten with just the vampire stuff would improve it. Then there's Blind Panic (yet to read it).
And then you can amaze people with the claim that you've read all of the Manitou novels to date. Woohoo.

Verification word: "eturding". Sounds like a good term for giving shit advice on the internet ;)

Read this one back in the day when it was first released by Pinnacle. MY how that ages me. LOL
Have to agree with you Will that it definitely wasn't one of Masterton's best. Though I can't recall much at all about it. Practically nothing in fact. The only thing that comes back to me is my being somewhat disappointed with it after all the good times & entertainment I'd had with his previous books.
Happy to tell you though that it was but a hiccup on his part though, 'cause each subsequent novel that I've read by him has both been fun & memorable. And of the three that you mentioned, I HIGHLY recommend PARIAH. It's one of my absolute favs.

"The Pariah" is mediocre.

"Manitou Blood" and "Blind Panic" are really good despite the reuse of Misquamicus, which I could do without.