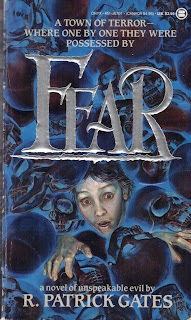 Somewhere I'd seen this unlauded - and seemingly unloved - horror paperback (it features no critical blurbs whatsoever) on a list of forgotten-but-good horror novels of the 1980s. But I beg to differ, whoever composed said list: R. Patrick Gates's first novel Fear should be forgotten for good. With its ridiculously generic title, clunky pacing, boring plot, inept characterization of kids and their abusive parents, idiot dope-smoking teens, elementary-school level intro to psychic phenomena, pretentious prologue and epilogue which reference Adam, Eve, and the serpent... where do I stop? Along with the author's rudimentary attempts, and wholly successful failures, at engendering said fear in its readers, it is horror fiction at ebb tide, where you can see all the wreckage that better writers rejected.

And last but not least, its most egregious failure is the always-unwelcome '80s trope of sibling incest (He turned and walked out of the bathroom, but not before he stole one more glance at his sister's tight buttocks). Fear not, fair reader, I read this stuff - or skim, to save eyeballs and brain - so you don't have to. Fear is an utter travesty. Avoid at all costs. Blue-black skulls ain't so bad, though.
Posted by Will Errickson at 10:52 AM

Thanks for the warning. The skulls do look cool, however.

Yeah, cool cover art. Looks like this is Gates' first book -- maybe he improved as a writer and storyteller w/ subsequent books?

Yeah, maybe. I know he wrote some books published by Dell/Abyss, but even that's no real guarantee.

I shudder to think of my misspent youth reading books like that by the dozen. You put it so succinctly: "This book's alright if you like crap." LOL.

Read this back when, and all what I remember is that in terms of sheer unrelenting nastiness it was a case of quantity over quality. Some people might consider it a recommendation, but there really was nothing else of interest that I hadn't seen done better elsewhere.

The cover copy is strangely generic in this edition. I had a UK edition. It was no better as a read.

I got sucked into his double-threat GRIMM REAPINGS and GRIMM MEMORIALS this Halloween season. I've gotta say, they were complete crap, and while I never feel obliged to finish complete crap (even when I've paid good money for it), I was weirdly and unexplainably drawn to both their conclusions. There is no moral compass by which these are written, and the depths this man sinks are truley twisted. But the novels had such a childish what's-this-thing-called-logic-and-good-narrative-all-about? that I was hypnotized by the whole free-wheeling, anything-goesness of them.

Will, I had a similar experience as Craig did with Gates' GRIMM MEMORIALS a couple of years back.
Parts of it were so badly written & so many of the characters were so unlikable that I almost tossed it aside on a couple of occasions, but once I got passed the halfway point I soldiered on through it.
And though after finishing it, I thought it was a fair to good example of it's era's schlocky, over the top, drugstore paperback original type of horror, I didn't make an effort to track down Gates' sequel or any of his other work, such as this one.
Though I do clearly remember seeing this one on many racks & shelves for a while there.

BTW, you're absolutely right.
WTF was up with all that nasty bro/sis incest in so many horror novels of the day?
Seriously, I could go into my bookshelves now & probably pull off about five or six of them in less than a minute that used that stuff as a plot device or a shock scene.
And, if I took the time to do some digging, I'd find at least twenty. Maybe more...
Strange.
Maybe some of the authors were influenced by AMITYVILLE II:THE POSSESSION & then others copied them or something. Who knows?

I too TRIED to read Gates Grimm Memorials. And let me tell you GRIMM was the word for it! I've read all sorts of gory horror crap before but he took the proverbial cake with that one! Just God AWful.No suspense or scares what ever. Just all stops out nasty child abuse told in detailed dismemberments! It had something to do with a witch that ate children .Like a modern day Hansel & Gretel. I think.

Just read his novel Vaders, and loved it. Every novel, cannot be everyone's cup of tea. this book was well written and he has excellent grammar, & a great action writing ability. I think I may pick up Fear due to all of the harsh criticism to see if its really deserving.

I knew Randy in high school and I was really looking forward to what I took as his first published book, Fear.
I was completely disgusted with it. Couldn't even get half way through it.
The only, Only redeeming quality was the references to all the places in Fitchburg that I recognized, having grown up their.
Mr.Antrobus. ..so disappointed. ..