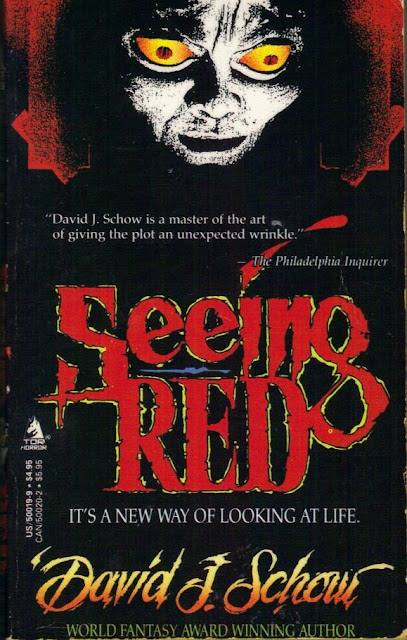 The first of two collections of David J. Schow's horror stories published in 1990, Seeing Red was one of my favorites back then. While Lost Angels included his longer, more ambitious, less genre-specific works, Seeing Red is just a bit more traditional. Many of the 14 tales here were originally published in magazines such as the '80s return of Weird Tales, or in Night Cry, Twilight Zone, or Whispers. What made them so appealing to me was their breadth of style: some are almost EC comic-like, others are glimpses into writers' lives, still others are energetically violent, and a couple even show some real sentimentality. 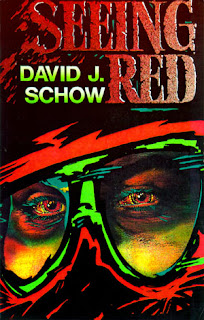 After the friendly, if slightly critical, intro by T.E.D. Klein - he relates how impressed by Schow's work he was as editor of Twilight Zone magazine in the early '80s and wonders if Schow is "too smart for horror" - the opener "Red Light" is one of Schow's best but was also in Lost Angels. "Bunny Didn't Tell Us" is a gleefully gross revenger about hapless graverobbers. "Incident on a Rainy Night in Beverly Hills" might be too much of a Hollywood in-joke; L.A. is Schow's bread and butter and the movie industry figures largely in many tales here, but I found "Incident" distractingly talky. "Coming Soon to a Theater Near You" is one of two stories set in movie theaters, and is straight-up repulsive, flesh-crawling horror. 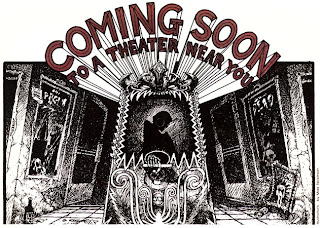 The willfully obnoxiously-titled "Blood Rape of the Lust Ghouls" is a true entertainment of a creepy gore-movie reviewer whose critical savaging of the titular film puts him in a delicate and unexpected place. This is the kind of insider-style horror story I truly dig. Another fave is "One for the Horrors," which has warmly occupied my heart of horror these many years. How could I not love a story about a movie theater that shows the movies that never were, shows the scenes the censors demanded cut, and is a love story about movie-lovers to boot? Cinephiles rejoice, it's wonderful. 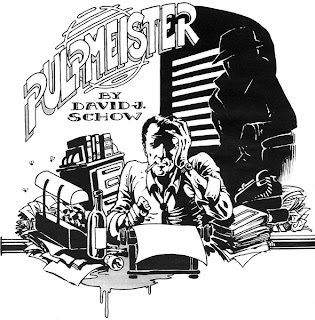 Same for "Pulpmeister," an autobiographical account of a hack men's adventure scribe who inexplicably meets the macho hero of his stories. Like Karl Edward Wagner, Schow uses his own experiences as a pulp writer and its attendant miseries for his fiction, dining on Kraft mac-and-cheese and dealing with harried, careless agents and editors, not to mention the horror of cranking out 200-page action novels in under a week. I can't even imagine!

A graffiti sigil stands in for the title of another, a tag from the beyond; a seriously authentic tale of street-punk lowlifes hustling on Hollywood Boulevard: Where was Sid Vicious's star? Jello's? Wendy O's? Nothing on the Walk of Stars related to Eye Man's reality. Fuck it. Schow's detailing of a horrific car crash that kills one of the punks hits dead-on. It also provides the collection with its title. "The Embracing" did nothing for me and was a drag to finish; it seemed like a pale imitation of one of Harlan Ellison's dystopic moral screeds of dark fantasy; it's also the earliest story here so maybe that explains its derivative quality. 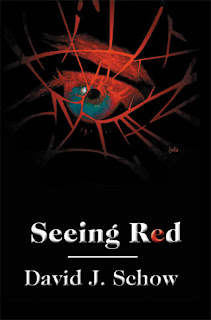 The star of Seeing Red is easily "Not from Around Here," the last in the collection, and one not published previously. Herein Schow's prose is more thoughtful and measured but not to fear: when the gore comes it's graphic and upsetting. Set in the rural areas outside San Francisco, it's sort of a story about a city slicker in the big bad woods who gets more than he bargained for. There are shades of Klein and King and Wagner, yes, but the sexual nature of the violence is presented in an unexpectedly new manner. "Not from Around Here" is actually scary, monster scary, which isn't something you find in horror fiction as much as you'd think. But it's about something too: there is bravery, loss, realization, and a new life to be had when fear is conquered.

While Schow's hyper-literate, arch, sometimes obnoxiously insider-y prose and endless now-dated cultural references might seem off to readers today, there are still some real gems in Seeing Red, some that I didn't even get around to discussing ("Lonesome Coyote Blues," "The Woman's Version," "Night Bloomer"). I find that dated quality kind of charming in a way. He liked to play with the genre and wasn't out solely for shocks; this probably lost him as many readers as it gained him. Schow may have moved on to a life of crime-writing these days, but I'll always remember him for Seeing Red.
Posted by Will Errickson at 12:31 PM

Sounds good. Heading to Amazon right now to see if I can find a copy.

Should be able to pick it up cheap; hope you dig it, and post a review of your own!

Schow never really got the credit he deserved for some of the cool stuff he contributed to the horror/splatter punk era. He was/is a great writer and some of his ideas were really killer.

I used to really dig his articles in Fangoria (I think now I'm dated as well). I think they were called "Raving and Drooling" (or something to that effect, or that might have been a subtitle of one for all that) and they dealt with his writing and, in some cases, tried to help others mimic that style of horror. Wish I still had access to them for all of that.

He always came off as a good guy and, again, it's strange that others rose above him while he seemed to stay, for the most part, mid-list even in the heyday of horror fiction.

Thanks, Aaron, I agree. And I read a few of his Fango "Raving and Drooling" articles too. I know his second novel, The Shaft, was turned down by his US publisher in '91 or so, and never pub'd here at all. I will be rereading Kill Riff at some point for review here.

Surprised I had the right name on the column (I really should verify these things before I mention them). Seems to me I read "Kill Riff" long ago and wasn't a big fan of it.

I don't think there was any "weird" angle to the book - most likely why I didn't dig it - and the whole thing kind of smacked of "thriller" rather than straight out horror.

Whether I'd think the same now or not I can't say, but I do look forward to reading your take on it.

It's always good to be remembered, especially for 20-year-old work!

Seriously, I don't know how to make non-period-setting stories "timeless;" fiction should reflect its era, and nobody seems to complain about Poe being too Victorian. Current stories reflect current interests ... and time marches on.

The reason "Red Light" is in two collections that came out virtually at the same time was because the story won a World Fantasy Award, which was NAL's entire rationale for doing LOST ANGELS, which allowed me to group a bunch of similarly-themed, longer stories that didn't otherwise fit into SEEING RED.

Digital (downloadable) editions are in the works right now. Soon.

For Aaron Mason: All the Fangoria columns and more are contained within the covers of WILD HAIRS. You're right -- THE KILL RIFF had little to do with "weird." It was a suspense novel. In fact, I've only written a single "horror novel," ever, and that was THE SHAFT, also easily mistaken for a thriller. The horror, or excursions of unease, are confined mostly to the short story collections -- BLACK LEATHER REQUIRED, CRYPT ORCHIDS, EYE, ZOMBIE JAM, HAVOC SWIMS JADED, and the inevitable "forthcoming new one."

Thanks, guys, for all your time and attention.

Thanks for the info on "Wild Hairs", I'll be sure to pick up a copy and revisit the glory days of Fangoria.

Too bad the magazine no longer has a section like that, considering there has been something of a rebirth of the fiction underground with a lot of the "extreme" authors working today (Keene, Lee, Smith, etc.).

Seems like now would be the perfect time to have someone pushing horror fiction in Fango, as the industry seems to be slowly dying with the departure of Leisure from the "real book" industry and the subsequent loss of the Laymon library, and affordable and attainable prints of some of the decent, newer stuff.