Robert Bloch: The Paperback Covers of the AUTHOR OF PSYCHO!!! 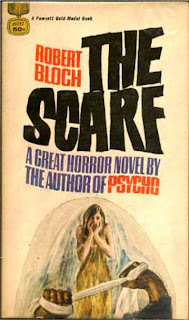 No reader of horror fiction needs an introduction to Robert Bloch. Once asked how he had the energy to be such an endlessly prolific writer, Bloch replied, "I have the heart of a small boy... in a jar on my desk." A groan-inducing pun? Yes, but that type of macabre, old-man humor is one of Bloch's trademarks. Since his teenage days in the 1930s as a personal correspondent of H.P. Lovecraft's, Bloch's countless novels and story collections have mined black humor and pathological criminal behavior. His works have been printed and reprinted for decades by various publishers with all different styles of cover art, but one thing was virtually a constant after a certain 1960 movie: the phrase "author of Psycho" beneath his name.

Early works like the crime novel The Scarf (1947), or The Opener of the Way (1945) originally from Arkham House, have it on their later mass market paperback resissues. And it's really no surprise, is it? Bloch had ostensibly created (with a filmmaker's assist, of course) the most iconic murder in all of horror - and crime - fiction. Publishers were not about to let reading audiences forget that. 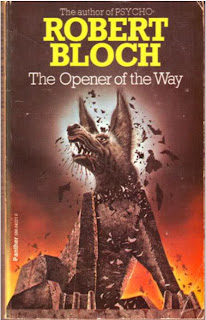 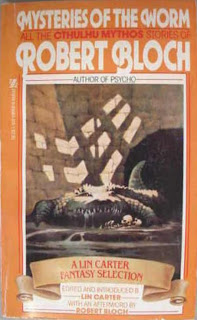 A UK edition of Opener of the Way (1976), as well as Mysteries of the Worm (1981), collect Bloch's Weird Tales/Cthulhu Mythos stories of the 1930s, which he admits were maybe just a little too amateurishly Lovecraftian to be of much interest years later. 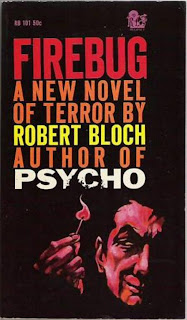 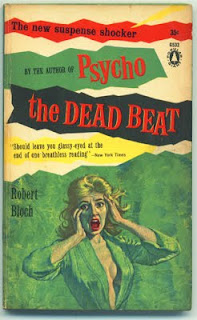 The Dead Beat (1960) and Firebug (1961) are suspense pulps with the appropriate cover art. Dig how the match flame is burning up Psycho... 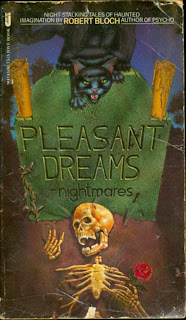 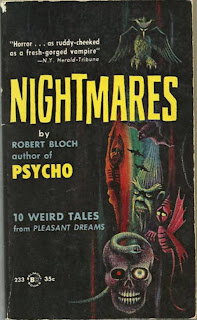 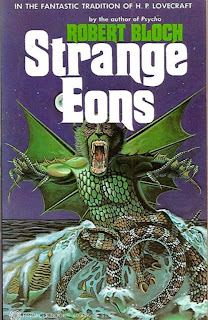 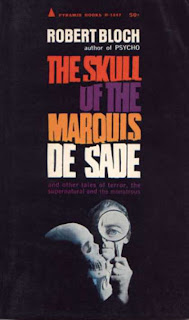 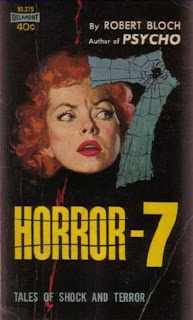 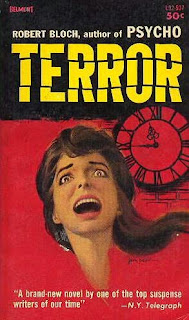 Terror (1962) and Horror-7 (1963) don't really go out of their way in the title department but know that a terrified woman is simply irresistible to horror fiction readers. Or at least a woman who seems slightly perplexed and pissed by her situation. 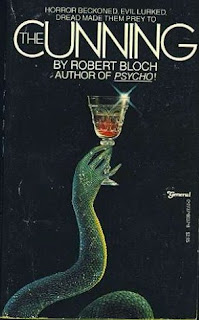 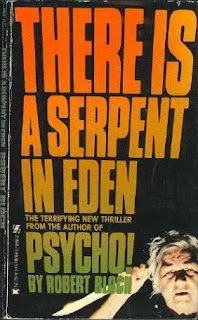 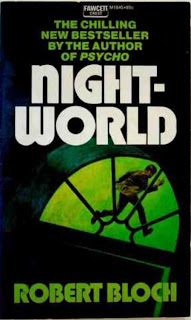 Novels like Night World (1972) and The Cunning (originally published as There is a Serpent in Eden in 1979 with a completely incongruous cover) followed. By the 1980s Bloch was being published by the Tor horror line, who even went way back to 1954 with its reprint of The Kidnapper. "Better than Psycho!" it exclaims. One seriously doubts that claim. The Night of the Ripper (1984) and Lori (1989) look like any other mass market horror paperback of the era; the latter title part of Bloch's boundless fascination with Jack the Ripper, whom he first wrote about in his classic short story "Yours Truly, Jack the Ripper" way back in '43. I read it way back in '89 or so and yet remember nothing about it. 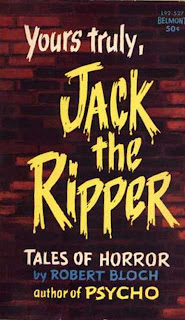 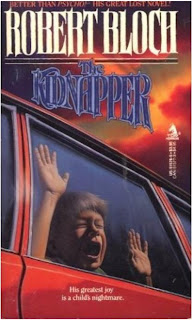 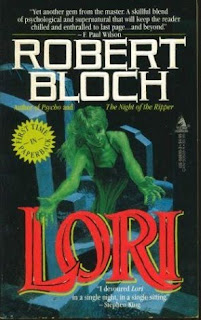 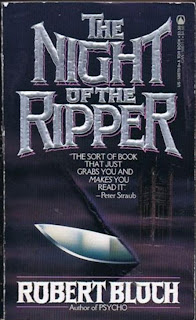 By the time of his death at age 77 in 1994, Robert Bloch was, of course, considered a grand master of genre fiction. One wonders just what became of that small boy's heart in a jar on his desk... 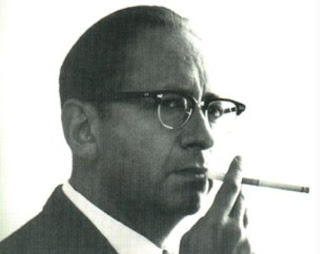 Posted by Will Errickson at 6:45 AM

I recommend his autobiography if you can find a copy. It shows him, faults and all, as a writer who survived countless hardships to make it big.

Where to begin with this one, Will. So great to see these covers again. I had a lot of these as a teenager, since combing bookstores (used and new) for Robert Bloch books was a hobby of mine. (Ever notice his books MIGHT be in a few different places in any bookstore--mystery, horror [if they had such a section], science fiction. I would always hit all of them before throwing in the towel.)

The one I always wanted was "Atoms and Evil," but I never could find it at an affordable price.

My local library (in suburban South Jersey) had one short story collection with the requisite "Other Books by Robert Bloch" list. I transcribed the list in 1979 and kept it as a checklist. (Naturally, I still have it.)

"Dead Beat" was always a favorite cover--but I do love the PVO and color scheme of "Night World."

Sorry, outside of the Networked Blogs link. Where's the Blogspot follow button?

That "Mysteries of the Worm" cover looks an awful lot like the VHS cover for the movie Alligator. Strange that it would be on a Cthulhu Mythos anthology.

Nice collection of covers Will. I wish some of these titles were a little easier to find these days.

Paperbacks aren't pulps...but that's a distinction that is lost on the a-go-go kids, I fear.

THE KIDNAPPER isn't better than PSYCHO the novel, but it sure is comparable. Sorry you couldn't find ATOMS AND EVIL, Peel..., but it wasn't his best collection of that era, anyway...if you had BLOOD RUNS COLD and PLEASANT DREAMS, you were ahead of the game...and the two Ballantine/Del Rey retrospectives of the 1970s, THE BEST OF RB and SUCH STUFF AS SCREAMS ARE MADE OF, were better introductions to Bloch than such later efforts as the SELECTED STORIES, mislabeled criminally as THE COMPLETE STORIES in their paperback edition (the three volumes of that set would have to be more like twenty volumes to be the Complete short fiction of RB).

Strange Eons is actually Bloch's Cthulhu Mythos novel. I didn't care for it but your mileage may vary.

Oh boy, Bloch fans. I have forever been searching for a particular paperback edition of Nightmares, much later than the 60's. The edition I had had a blue background, upon which was an image of the scariest black-dog-monster thing with red eyes and a mouthful of teeth, and that's it. I read it so long ago but have always remembered it...finally figured out that it was Robert Bloch, but have had no luck with this version, which I simply MUST HAVE. Any suggestions on how/where to find it? The dog/monster creature looked very similar to the cover above on The Opener Of The Way...but a close up, and not of stone. Would love some suggestions, thanks! And if anyone has a copy, I'm buying!

I'm not sure of which edition of Nightmares you mean, but one of the best resources would be Fantastic Fiction.

I know this post is seven years old, but this book sounds more like The Mind Spider and Other Stories by Fritz Leiber.