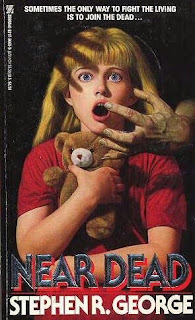 More tacky, foil-stamped, overwrought horror paperback cover art from the esteemed publisher Zebra Books. This time it's an author I only recently heard of, Stephen R. George, and about whom I can find virtually nothing online, other than that he's a Canadian author who wrote under several pseudonyms. Well, whoop-de-damn-do. At least he left behind a couple howlers of paperback covers—the artist of several is Richard Newton. 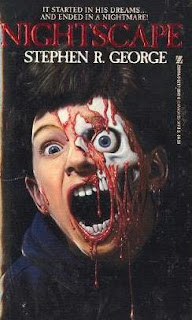 When I first came across the ludicrously grotesque cover for Nightscape (1992), thanks to The Mighty Blowhole, I was gobsmacked. It really is one of the most dumbfounding covers I've ever seen, more reminiscent of a cheap 1980s VHS box cover for some ghastly shot-on-video atrocity than an actual book. At least the kid still has all his hair. 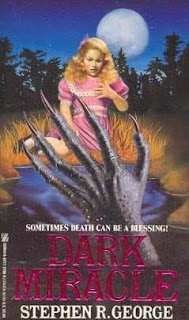 Like Near Dead (1992) above, Dark Miracle (1989) appeals to the psychologically healthy among us who dig corruption of little girls. 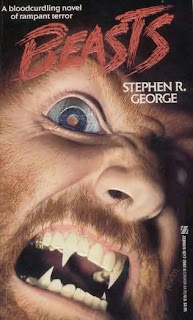 Beasts (1989) I much prefer canine teeth as fangs than the current "True Blood" style that use incisors as fangs; those kind look truly ridiculous to me. 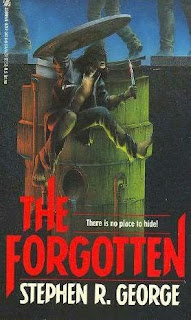 The Forgotten (1991) I think my best friend in junior high drew this during study hall and passed it to me after class. 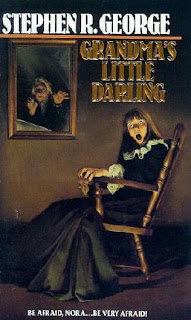 Grandma's Little Darling (1990) Sure, why not use the tagline from Cronenberg's version of The Fly? Nobody remembers where it came from anyway. 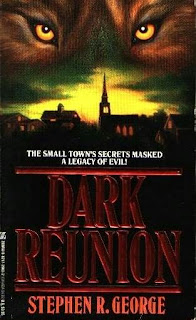 Dark Reunion (1990) Masked a legacy of cliche is more like it.

I really can't believe these covers were still popular in the early '90s; I associate this type of pulpy tastelessness with the 1980s. Doesn't look like George wrote anything after the mid-'90s, either. Is he much missed? You tell me.
Posted by Will Errickson at 9:30 AM

Some of these covers look so familiar but I can't think of where I saw them -- maybe in one of the old Crown Books when I used to sneak into the horror section just to see what was there before grabbing the next Hardy Boys title?

The cover for Grandma's Little Darling made me laugh out loud. God, I love these cheesy things!

The cover for Near Dead is quite impressive. Just from a technical stand point, the photo realistic cover is well made. Just look at the evil hand and the texture of the Teddy bear. Remember, this was before every single cover was Photoshoped into lifelessness. Kudos to the artist, whomever he may be.

I see his books in used bookstores all the time. Have to admit the cover art is lurid, but I almost can't help picking them up. Can someone who's actually read them tell us whether it's worth taking any of them home?

Haha, I just bought Near Dead recently. I should read it soon to see how bad it is. I love the cover of Grandma's Little Darling. The painting in the background and the expression on the girl's face are hilarious.

What I love about your site is that you unearth not just the gems of 80's horror--the Barkers, the Campbells, the Grants--but also the utter dreck--the Near Deads, the Tricycles. Sometimes when I visit this site I wonder why I didn't pick up horror fiction until 2005; other times I'm reminded why I avoided it for so long.

Glad you guys are diggin' these crazy covers. Horror fiction is, for better and worse, made of both Clive Barker's transcendent works as well as the denizens of pulp...

Great post! (and thanks for the plug! ;) ) I've got a few of those books. I know I've read some Stephen R. George, but I can't remember which ones. It was a sad day for bad book covers when Zebra got out of the horror biz...

Believe it or not, his books are really entertaining and well done. I've read them all and "Nightscape" and "Bloody Valentine" are exceptional. I kid you not. Tear the cover off if you have to, but there are good stories in his books... The writer is Canadian and does technical and ad writing now, I believe. I corresponded with him a few times and he is a great guy. I think he was mortified by the covers Zebra slapped on his books.

Cool, Jimtendo, that's what I like to hear! Thanks for commenting. I have heard from other authors of that day who were also truly horrified by the cover art for their books.

I concur. Read NEAR DEAD and NIGHTSCAPE and enjoyed them both. Suspenseful and well-written. They won't win any lit awards but they are sure better than some of better-known horror authors.

Then the next time I see one in the wild I'll grab it!

I just found out who is the artist behind these covers! Stephen R. George came to told me himself.

I am a fiction writer here in Brazil and soon I'll be releasing my next book. My plan is to get this kind of cover (even I feel my editor won't be down to it), so, after searching endlessly for the artist, I decided to send an e-mail to Stephen, and a Facebook message as well. Three days later my Facebook chat box pops up and here's the answer:

As far as I know the books were illustrated by an artist named Newton. That's all I know. He did a few of my books including the three you mention."

Then I went to Google, typed "Zebra Books Newton Book Covers" and this is what I got:

Thank you, Tiago! I am aware of Richard Newton as a Zebra artist, but it's been hard to pinpoint all his work as they rarely if ever credited an artist on the copyright page. I appreciate the link, it really fills in some gaps.