The Chill Series by Jory Sherman 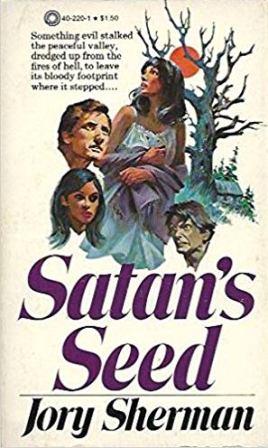 Thanks to random Google adventuring, I just discovered this Chill series, published by Pinnacle Books from 1978 through 1980, all by an author I was previously unfamiliar with named Jory Sherman. Seven volumes in all, beginning with Satan’s Seed.
Actually I am still pretty unfamiliar with him, although I've learned he's written about a gajillion Westerns over the decades. This psychic investigator stuff looks like sheer pulp fiction cashing in on the pseudoscientific tabloid trends of that wild n' wooly decade known as the 1970s.
The series title is the nickname of one Dr. Russell V. Chillders, the aforementioned "psychic investigator" (why do psychics need to "investigate" shit? Wouldn't they already know?) Cover art is by Paul Stinson, save for the first two titles above; their more mildly Gothic imagery done by Jack Thurston (for UK cover art and some plot synopses, go here). I can't get over that Cabbage Patch doll head at the bottom!
As you peruse the covers, note the wonderfully dated fashions, standard horror tropes, occult fads, and paperbacks that cost merely a buck seventy-five. The '70s indeed.

Please, if anybody out there's read any of 'em, let us know!
Posted by Will Errickson at 6:33 AM

Okay, those're pretty neat. I've never seen them nor heard anything about them or their author...they certainly look worthy of trying if any of these '70s leftover pulp fiction volumes ever rears its gaudy head in one of my local bookstores.

Quote of the day:
why do psychics need to "investigate" shit? Wouldn't they already know?

Never heard of these either, but I tend not to pay attention to anything published after 1960 when it comes to occult or psychic detectives. Too much rehash for me.

FWIW: Chill #2 is called THE SEPULCHRE and here's a portion from the blurb: "There was the green slime. There were the creeping vines. There was a Louisiana mansion, haunted by a malevolent and vibrating force more powerful than the humans who lived there, whose terrifying history remained buried in 18th century France. [...]" Some POD outfit called Hard Shell Word Factory "reprinted" some of these back in 2004.

The covers seem to indicate a kind of Kolchak the Night Stalker direction, but the only one I read (Chill aka Sepulchre) was more of a tame southern gothic, family drama. And not in a good way.

After seeing your this post I picked up a cpouple of these at my favorite used book store. Finished the first one, Satan's Seed, last night. It is exactly what you'd expect. Good, hokey, 70s fun. I want them all!