While he isn't usually associated with horror fiction, British author J.G. Ballard, born on this day, November 15, in 1930, his dystopian, quasi-science fiction novels and short stories from the 1960s and '70s have countless moments of deeply disturbing shit that I think will appeal to horror readers looking for new thrills. God knows throughout the 1990s I spent hours with his books, underlining passages that spiked deep and found purchase into some unknown region of my brain.


The collision of our two cars, and the death of her husband, had become the key to a new sexuality.

I visualized her lying on a metal bed in the emergency ward, her bloodied face and shattered nasal bridge like the mask worn at an obscene halloween, the initiation rite into one's own death...

Ballard fused sex and death like a duet. Crash (1973), High-Rise (1975), and The Atrocity Exhibition (1970) are famous works of modern fiction, offering challenging ideas and even experimental structures, all in prose as shining, precise and unsettling as a table of surgical instruments. Peering into the deepest structures of society, he extrapolated into the future - not a future of spaceships and other fictional technologies, but of the human mind.


In the future, violence would clearly become a valuable form of social cement.

Their real opponent was not the hierarchy of residents in the heights far above them, but the image of the building in their own minds...

At first, you might be baffled by Ballard's obsession with celebrities, with automobiles and highways and tower blocks and the JFK assassination, with clinical sex and our deteriorating bodies. But the more closely you read, a pattern seems to emerge, perhaps a new mythology born not of our interaction with natural elements as our prehistoric forefathers, but of those very things we've caused and created.


However, you must understand that... science is the ultimate pornography, analytic activity whose main aim is to isolate objects or events from their contexts in time and space. This obsession with the specific activity of quantified functions is what science shares with pornography. 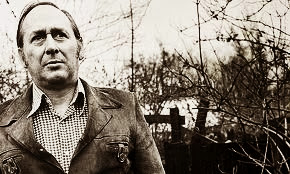 I highly recommend the three titles you see above. Also, Ballard is the only writer to have two novels - Empire of the Sun and Crash - adapted into films directed by both Steven Spielberg and David Cronenberg, respectively. I mean, there you go - that gives you some idea of his breadth and depth as an artist. And I am quite happy that we share a birthday!

Posted by Will Errickson at 7:34 AM

Well-done post on Ballard. I read Hello America some years ago. I understand Ballard was dissatisfied with it, but it's a good read. The novel has his lyrical sweep in a post-cataclysmic New World, with a "president" who resembles William S. Burroughs.