Dreamthorp by Chet Williamson (1989): Dreams of the Night Will Vanish by Dawn

Damn, I'm having no luck with the titles I'm pulling off my shelves: this is another bummer of a book. After a couple effective, well-written opening chapters (particularly one set in the Native American past), I was hoping Dreamthorp would keep up its momentum; alas, Chet Williamson's fifth novel (Avon Books, July 1989) suffers from too few scares, indifferent pacing, corny dialogue, and an over-graphic reliance on a serial killer's mother issues. The off-putting cover - by James Warren, from a woodcarving character's project - and obscure title don't help. The original "Dreamthorp" is a treatise of philosophical essays from the 19th century by Alexander Smith. Williamson integrates quotes from it into his tale, using them as chapter headings which illuminate the action therein. It's not a bad idea, I suppose... but what was the point? 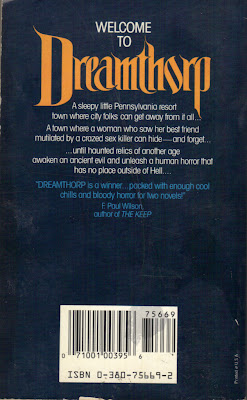 If Williamson had held back, made the novel quieter, more streamlined, and especially shorter, it might've worked. Conversely, if he went hell-bent-for-leather à la Masterton, disregarding believability in favor of intensity and outrageousness, it might've worked. But this in-between style, going for character and motivation and life and history and art and love and parenting and divorce and death and loss, shows all the weaknesses in a writer. Certainly not the worst book I've ever read, as there are a few moments that took me by surprise, but I kept cringing at the obvious dialogue and the pages and pages of inaction... so if you have Dreamthorp on your shelf, you might want to give it a miss.

Posted by Will Errickson at 7:13 AM

This has been resting on my shelf, unread, ugly-as-sin since, oh, I dunno...around when I first read his tale, "Excerpts from the Records of the New Zodiac and the Diaries of Henry Watson Fairfax". I loved the latter but the former seemingly has a lot of ground to make up for if I'm going to enjoy it...

I read this one recently. I agree that it wasn't very good, but it definitely showed promise for Williamson. My take on it is that the intellectual bent of it makes the schlock horror aspect seem that much more ridiculous. Its hard to frame gory horror with brainy prose, not too many authors can get away with that. It seems like kind of a failed experiment. That said, I definitely will try Williamson again, because he seems like a promising writer.

This has been resting on my shelf for years until I took the plunge and read it recently. I agree with you. The book starts out strong than sort of deflates with few scares in between flat dialogue. Williamson seems to be stuck in nowhere land. Too bad, for this title looked like a winner to me.