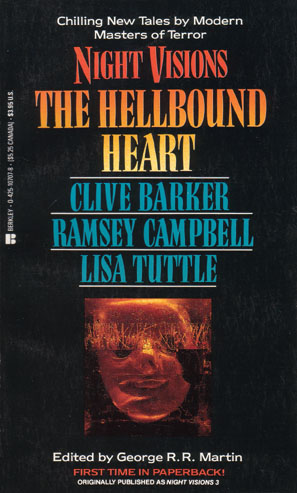 "Bad horror stories," writes editor George R. R. Martin in his perceptive introduction to the anthology Night Visions 3, "concern themselves with six ways to kill a vampire and graphic accounts of how the rats ate Billy's genitalia." Go on, I'm listening. "Good horror stories are about larger things. About hope and despair. About love and hatred, lust and jealousy... about loneliness and alienation and psychosis... the human mind and body and spirit under stress and in agony, the human heart in unending conflict with itself."

All this is true and all this is (mostly) what I want in my horror fiction. Sure sometimes you need to know six ways to kill a vampire, and who doesn't love a good rat chomping? But for this, the third volume in Dark Harvest's long-running hardcover series Night Visions (published in paperback by Berkley, Mar 1988), Martin has chosen well and wisely the kinds of the stories he's described, and almost to a one, they show the width and breadth of what good horror is. Or at least was, in the mid 1980s. 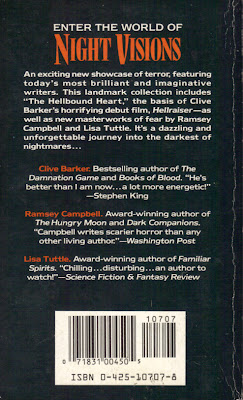 First, two of the biggest names of '80s horror, Ramsey Campbell and Clive Barker. Campbell at this time was already fairly well-established as both an editor, while Barker, hot off the Books of Blood, was the rising star, the enfant terrible, the upstart splatterpunk. Fellow traveler Lisa Tuttle, while much less known, had been writing SF/F shorts for years, and even co-authored a fantasy novel with Martin. Her 1985 collection (published in the UK only) Nest of Nightmares was well-received, and she also appeared in the seminal horror anthology Dark Forces in 1980. Together these three writers provide perfect contrast to one another. Let me not quibble: Night Visions 3 is as good a horror anthology as I've read lately; I enjoyed it immensely (a far cry from my experience with Night Visions 2). 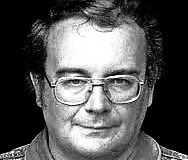 First up are seven short stories from Campbell, and lemme tell you, these are classic Campbellian works (I know, I know). Lone, lonely characters are sloooowly immersed into a world askew, rural or urban, seeing distorted faces seen in tree trunks and deserted windows, hearing rhythmic whispers tangled up in their ears, threading through thought and deed, and deaths obscurely predicted and decidedly met. Everything seems to happen just at the jagged edge of perception, where one's identity bleeds out and some kind of violence - whether physical, psychological, supernatural - begins to breathe. I read all seven over about three or four days and honestly they flickered off and on in my head the entire time I was not actually reading them; "Looking Out," "Bedtime Story," "Root Cause," "This Time" and "Beyond Words" were all so so good... Listen:


His wife lay face up beside him, her mouth gaping. She might have been panting in her sleep, except that her chest was utterly still. No, the sound was coming from the face that quivered above hers, the jowly face with its tongue gray as slime and its tiny pink eyes like pimples sunk in the white flesh. He thought of a bulldog's face, but it was more like a noseless old man's, and its paws on her chest looked like a child's hands. 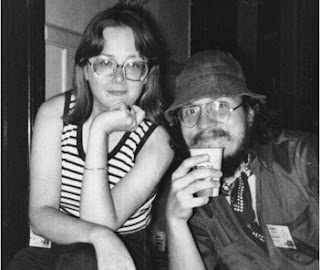 
Now I've read a few of Tuttle's horror stories over the years and I've liked them just fine. After reading the three longish ones here - "The Dragon's Bride," "Another Country," and "Riding the Nightmare" - I hope to move on to at least one of her '80s novels. Yeah, she's good - an entirely different writer from the more stylized Campbell and Barker, her prose almost a palate refresher. Her depiction of male/female relationships is a welcome one, a healthy one - Campbell has almost none, and Barker's is beyond the pale - a believable one. Relationships she describes however don't necessarily end happily. 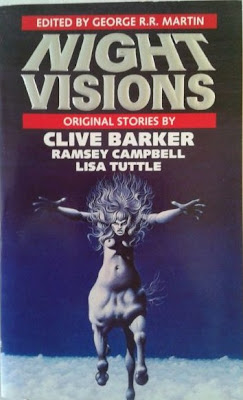 I don't want to make a whole thing about it but what makes Tuttle's stories so, as I said, refreshing, is the ease with which she writes about women. Which you didn't always find in 1980s horror fiction (quelle surprise!). In "Riding the Nightmare" (the basis for the cover art of the UK paperback above) Tess O'Neal rides the treacherous line in a ménage à trois when a nightmare from her childhood creeps back into her slumber. Then a pregnancy threatens to tear the whole relationship asunder. What terrifying revelation does a child bring? Only this: this baby girl made her feel not only love but also fear and frustration and pain. Motherhood was not as instinctive as she had believed it would be. And only that nightmare will give understanding.

"The Dragon's Bride" might have been my favorite work in Night Visions 3. It's interesting people doing interesting things. A young man picks up a shy young woman in a bookstore and learns she knows as little about her past as he does. Together they journey to the English countryside after the aunt who raised her commits suicide. Young man realizes he may, as the saying goes, have gotten more than he bargained for. Dragons, snakes, sex, caves, vaginas, father issues: "Dragon's Bride" has it all, plus a great - ahem - climax.

The cave was hot and moist around them, she was hot and moist, embracing him, and then he felt the dragon moving, still alive, and he tried to free himself, but she held tight, and it was too late. As he came he shouted. The orgasm seemed to empty him of everything, pain, pleasure, memory, desire, understanding. He lay, stunned, on top of her, unable to move, as he waited for his personality to come back from wherever it had gone. 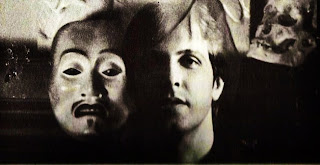 Which brings us to, finally, the infamous novella that gave the paperback its subtitle and the world a new pantheon of monsters, "The Hellbound Heart," Barker's hellish fable of love, romance, and otherworldly sadomasochism. I wonder about those who read it before Hellraiser was released, and what they thought: did they think it wasn't as good as the book? Were the Cenobites what they'd imagined? Clear your mind of Pinhead and the Chatterer, for what Barker presents in impeccable prose is mostly insinuation: scars, hooks, wounds, stench, deep-sea phosphorescence. The first chapter captivates with its originality, its visionary power, with Frank Cotton opening Lemarchand's box and summoning the Cenobites:


He had expected sighs, and languid bodies spread on the floor underfoot like a living carpet; had expected virgin whores whose every crevice was his for the asking and whose skills would press him - upward, upward - to undreamed-of ecstasies. The world would be forgotten in their arms. He would be exalted by his lust, instead of despised for it. But no. No women, no sighs. Only these sexless things, with their corrugated flesh. 
Sure, there's more - there's always more with Barker - but there's not as much as you'd think; he could have more thoroughly fleshed out (pardon the pun) characters both human and not, given us more of the Order of the Gash, the Engineer, the backstory of Kirsty and Rory (renamed Larry in Hellraiser), because I had no idea why Kirsty kept turning up. She's not his daughter as in the film, which makes sense. Why would imperious, beautiful Julia permit one of Rory's former lovers - is that right? - to be part of their married life? I really dunno. What I do know is that "The Hellbound Heart" showcases Barker's immense talent, his untouchable talent, for twining the repulsive and the seductive; for limning the limits of desire and the thirst for knowledge. Characters do not shy away from horror, at least not for long; they confront it, embrace it, confound it, bargain with it - as Kirsty does, promising Frank back to the Cenobities, to which one replies: "...And maybe we won't tear your soul apart." Gee, thanks guys! (Also includes the line "No tears please. It's a waste of good suffering," case you were wondering.) 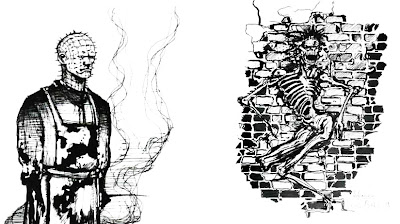 Julia could not see Frank's eyes, but she felt them sharpened beyond pricking by envy and rage. Nor did she look away, but stared on at the shadow while Rory's moans increased. And at the end one moment became another, and she was lying on the bed with her wedding dressed crushed beneath her, while a black and scarlet beast crept up between her legs to give her a sample of its love.


So, yeah: Night Visions: The Hellbound Heart. So good it hurts.
Posted by Will Errickson at 8:59 AM

Oh wow. I bought a copy of this (with the cover art at the top of the page) when I was about 16? 17? for about a pound from some discount bookshop. I'd already read some Campbell and already thought he was amazing, and the other two authors blew me away too.

In a very real sense this was one of the most important books to me in terms of evolving my taste and the type of fiction I eventually ended up writing. So glad to see you liked it too!

I still have this paperback (the first one featured here). It was a constant companion though many a long wait in various doctor and hospital waiting rooms. I remember liking and enjoying all the Lisa Tuttle stories at the time, but for the life of me I can't remember the plot of a single one today. While the Campbell ones I do remember, and the Hellbound Heart especially is as fresh in my mind as if I read it just yesterday.

Somehow I missed Lisa Tuttle's work until recently. (My misguided journey through grad school, with its related mandatory reading detour through the Renaissance, is probably responsible.) From what I've (ravenously) read in the past couple of years, you do her justice with this review.

The only Tuttle I've read was "The Horse Lord" in Years Best Horror VI. It was one of the best stories in the book (although nothing could top William Scott Home's "A Cobweb of Pulsing Veins" IMO).

I'm dying to read Home! Unfortunately I don't have that particular YBH.

It describes the (mis)adventures of a graverobber, written in archaic language and clearly a homage to Poe or early Lovecraft.

He also published a chapbook, Hollow Faces, Merciless Moons, which I have owned for years but still haven't haven't read.

The other standouts from YBH VI are "At the Bottom of the Garden" by David Campton, and Russell Kirk's "There's a Long, Long Trail a-Winding", which isn't scary but is a great story nonetheless.

Ah, yes, I'm familiar with the Campton and Kirk tales. One of these days I will purchase a copy of HOLLOW FACES... You can read a very good review of it here: