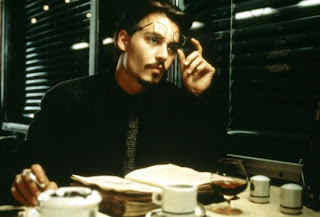 Yes, once again: a handful of email queries I've gotten from desperate TMHF readers recently, folks looking for forgotten horror novels and stories of years past. These are ones I unfortunately don't know myself; I'm sure some of you horror sleuths out there can get on the case - don't leave your fellow horror fiction fans hanging!

1. It was a picture of a house and I believe the house was twisted and looked like some kind of demonic face... and from what I can remember the basis of the story was about a family moving into this house and they had a son who seemed to be the protagonist that had to deal with the monster or ghost.

2. A giant tree, little people climbing it and on up the tree were some kind of monsters, like lizard looking maybe. When I say big tree I mean like the tree was the size of the Empire State Building.

3. Graphic, intensely shocking story about a pregnant insane woman who stitches herself shut to keep the baby from coming out.

4. A temple-looking place that was lit up golden by torches and there was a statue of some kind of beast holding a bowl that looked like the top part of a bird bath that had a bright red liquid in it, blood possibly. In the distance looking down from the temple or well kept ruins, seemed to be jungle-looking type growth. I want to say the statue holding the cauldron may have had an
ox head or goat head.

5. Mutated fungus or mold that turned the infected into highly light-sensitive zombie-like creatures that would then stalk around after dark looking for new people to infect (by mouth-to-mouth contact, no less!). The plague started with an infected cat, and the main character was a teenage girl (I forget her name, but her best friend was Maxine). Found! 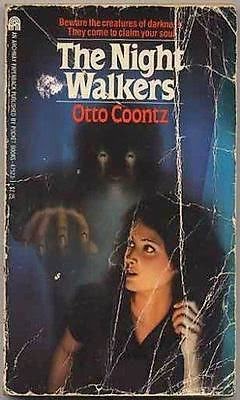 6. From what I remember, a family moves to New England. Wouldn't you know it, the oldest son soon grows distant and more reclusive, eventually moving into the basement. The family is content to leave him down there, listening to his music and being a teenager. Eventually he paints the basement all black, blacks out the windows, etc. At the climax of the novel, a parent (the mother?) goes down there to find that he is just about to open a portal to hell, assisted by a few red-robed supernatural beings doing some kind of supernatural incantation over a supernatural altar. The parent is able to disrupt the ceremony, portal to hell closed, fin.

Posted by Will Errickson at 3:23 PM

#5 is 'The Night Walkers', by Otto Coontz. Cover image and description can be seen here.

Jay, thanks so much. I've already emailed this title off to my hopeful reader.

No 2. sounds a lot like Alan Dean Foster's MID-WORLD. It's sci fi but has a very similar premise. A world entirely composed of massive trees and the people who live in and on them. They fight numerous monsters in a quest across the branches.