Fawcett Horror Paperbacks of the 1980s 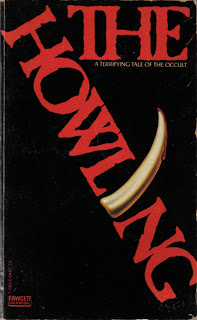 By the early 1980s, Fawcett seemed to have moved on from the moody, studied paperback cover art they used in the 1970s. Perhaps the growing horror field of the new decade gave them more competition and those books didn't sell as well any longer. Perhaps talented artists who worked in paints and canvases and good old-fashioned suggestive spookiness were too expensive. These covers are simpler, more direct, not as impressive, and in a couple cases just corny, tasteless without being quite ridiculous enough for a laugh. The three volumes in The Howling series, Gary Brandner's werewolf saga, (1977/1981/1985 respectively) utilize the same monstery font and stylization; I do kinda like the "one fang/two fangs/three fangs" motif. 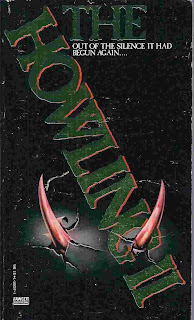 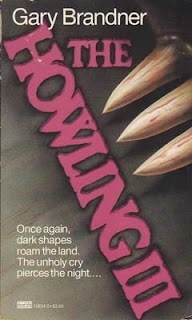 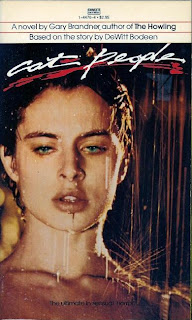 When Paul Schrader remade the 1940s classic B&W Val Lewton horror film Cat People in 1982, Brandner wrote the novelization. Sure, this cover has the same image as the movie poster, but what an image! Truly one of my favorite horror ladies of all time. 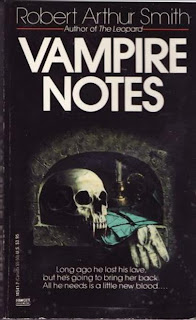 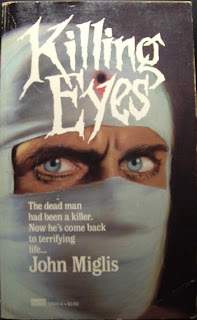 Killing Eyes, John Miglis (1983) Yikes. I mean, look away! Those eyes are so unsettling, I missed the bullet hole first time I saw this cover. 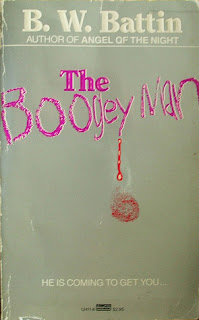 The Boogeyman, B.W. Battin (1983) This kind of simplicity actually works: the child's scawl, the bloody fingerprint that looks almost real... 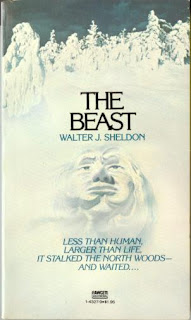 The Beast, Walter J. Sheldon (1980) Move along, nothing to see here folks. 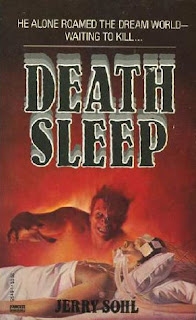 Death Sleep, Jerry Sohl (1983) He sure sounds like Freddy Krueger... 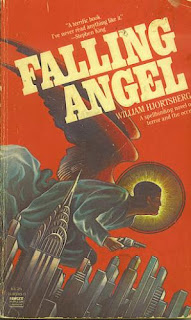 Falling Angel, William Hjortsberg (1978) - Yeah, it's from '78, but I'm throwing this in as a freebie. I've featured this cover before, in my review; it's absolutely one of my favorite books that I've read for this site! I even sent an effusive fan email to Hjortsberg a month or two ago (drinking and the internets don't mix), but luckily received an appreciative reply. Whew.
Posted by Will Errickson at 6:04 AM

I have an edition of the Cat People novelization and believe it or not it's a hardcover and not a paperback like the Fawcett edition pictured here, same cover though. The novelization is just OK and I kind of expected Brandner to expand the story more than he did since he had experience writing about shapeshifters with The Howling.

I like these covers so much better than the small press horror covers that are in circulation now.

These covers are for horror fiction, but they look like they were drawn by adults.

Brings back memories of me stocking the shelves of my parents' used bookstores. I would see all of these books. Some of them I read and some I passed on for one reason or another.

Have you ever reviewed a weird little novel called INSTAR? Marketed as horror, it wasn't; but it was a good read even though I was expecting a horror novel.

Haven't even ever heard of INSTAR! Cool cool cool.

Robert Arthur Smith wrote a great historical Werewolf novel - werewolves and dark magicians during the French Revolution - called The Prey at the time.

Y'know... It didn't hit me until right now, but the dude on the cover of Killing Eyes looks just like John Phillip Law did during his cinematic turn in Danger: Diabolik!. Just a, uh, just a thought.

Will, Robert Arthur Smith wrote a brilliant piece of horror Gothic fiction slash rollicking werewolf adventure novel called The Prey. I have read that book more than any other in the past thirty years. I know you don't do eBooks, but it is the only one of Smith's books that he has self published for Kindle and only charges a couple of bucks. The paperback (also a classic Fawcett cover) will cost you much more on eBay. I have it lined up to review on my blog later this year.

Thanks for the low-down on THE PREY, guys. Sounds really good; I see it has five stars on Amazon!

Alejandro, dammit, thanks, those eyes seemed so creepily familiar. You nailed it.

I just scored a copy of Vampire Notes from half.com - 2.75 + shipping "appears unread - light shelf wear". I had no idea Smith had written anything other than The Prey.

OMG, The Prey, it sounded really familiar so I looked it up on Amazon. I totally had thar book back in the early 80's and I remember liking it but I honestly can't remember it. I may have to try to find a copy for old time's sake.

I remember The Howling being a real piece of crap, but the movie is awesome.

As other at China's event can tell you, there was no gaming going on. At one point I even stated that some of the discussion needed to cease as I considered myself outside of their loop of Security, being from another state. What I don't know, I can't talk about. My only role as "leadership" is trying to get more people to see the PatCom as a get together of like minded people and to try and grow the tribes that exist, but are not solid yet. Look to what Bill and the rest of us are attempting in Texas next month. None of this is about leadership but about growth. Again, the only reason some would call us leaders is the simple fact that we 'stepped off first', nothing more.
Please, If you can, contact China, help put together another PatCom in that area, you won't be disappointed.bfake bullet decals

I liked the Howling novels, remember owning and reading those.

I've only read the first HOWLING novel but own the other two, I'll get around to 'em someday!