The Silence of the Lambs by Thomas Harris (1988): Don't Wanna Go Down to the Basement 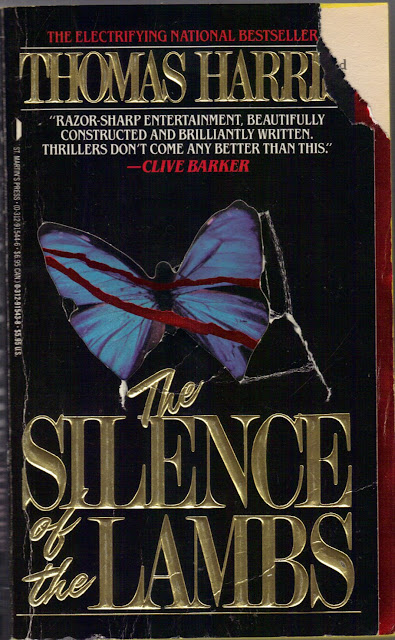 Bought this battered, chewed-up (natch) first edition paperback copy of The Silence of the Lambs (St. Martin's Press June 1989) off the 10-cent rack at a local bookstore last week and spent the next day and a half utterly immersed in it. Larry King's "double-dare-ya" is no joke, guys, as there's no putting this one down. About 10 years ago I read Red Dragon (1981) and was duly impressed, although today I remember little of it; I put off reading Silence for so long because the movie is so etched in my - and everyone's - imagination. But what struck me most about the book is that while Thomas Harris gets credit for creating one of the great pop villains of all time, his female protagonist is every bit that villain's equal. Before Hopkins and Foster even stepped before the camera, Hannibal Lector and Clarice Starling had been created and depicted with total mastery and psychological realism. 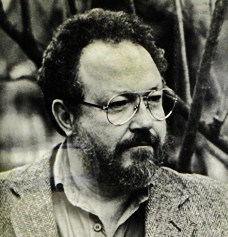 I've wondered before if Silence can be considered horror, and after reading the novel I'm still not sure if it is or not. The violence and degradation is presented so starkly that there is nary a whiff of exploitation or gleeful malevolence in Harris's intent. However, in this edition I found, the original paperback from 1989, you can see who the book was being marketed to originally, with Clive Barker's blurb emblazoned prominently on the front cover... something quite noticeable in its absence on the later movie tie-in edition. 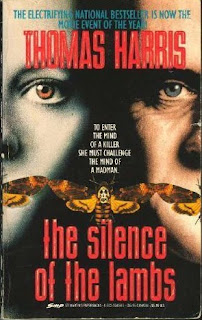 While reading it the film buff in me marveled at the screenwriter's adaptation of such a psychologically taut and precise work; he knew just what to leave in and what to leave out. What got left out works wonderfully in the novel but would have weighed the film down: Starling's precarious place as a rookie on such a treacherous case, Crawford's dying wife, the intricacies and political jostlings of the FBI Academy, Lector's maroon eyes and six fingers on one hand, and especially, the hideous history of Jame Gumb presented in almost police-report detail.

Harris is that kind of popular writer that can move a story forward with power, with conviction, but doesn't stint on those tiny insights into human nature that convince you you're reading something real, by a writer who's lived and isn't just repeating what he's heard. Describing the crude dirty joke to Crawford that gave Gumb the serial-killer nickname "Buffalo Bill," Starling discovered she had traded feeling frightened for feeling cheap. Of the two, she preferred feeling frightened. Later, when in a rural funeral home processing the monstrously wounded victim found in a river, Crawford knows he made the right choice in plucking Starling from school to help in this case:

Crawford saw that in this place, Starling was heir to the granny women, to the wise women, the herb healers, the stalwart country women who have always done the needful, who keep the watch and when the watch is over, wash and dress the country dead. 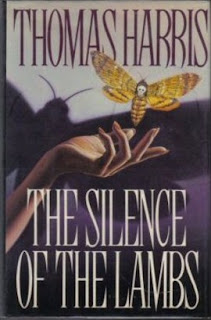 One of the men who had a relationship with Gumb describes him well and truly, chilling in its simplicity: You always felt the room was a little emptier when he came in. Whew. That's good. And poor Catherine Martin, Gumb's current victim, who in that horrid hole dreams the dark came into her, insidious, up her nose and into her ears, damp fingers of dark proposed themselves to each opening of her body.

As for Lecter, he is quite what we saw in the movie version, although Dr. Chilton (god, that asshole!) and imposing orderly Barney both have insights into his nature that are quite penetrating: Lecter is not afraid of pain, of solitude; no, what he fears most is boredom and indignity. A mind as vast and all-consuming as Lecter's cannot bear those things, and it is with these coins that Starling attempts to bargain... 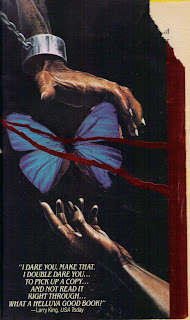 
Next, Lecter dropped a note to Dr. Frederick Chilton, in federal protective custody, suggesting that he would be paying Dr. Chilton a visit in the near future. After this visit, he wrote, it would make sense for the hospital to tattoo feeding instructions on Chilton's forehead to save paperwork.
Posted by Will Errickson at 9:00 AM

The best horror is like the best wine: we have it so rarely that we don't recognize it. This book is one of the best because it doesn't revel in the details; that's why King is on top even though there's less gore in his books than your average YA potboiler. Thanks for writing about this classic. Good horror should first be good writing, good characterization, and good storytelling.

I haven't read this book in forever. I think I'll see if my library has it.

I had the pleasure of reading the book before seeing the movie--just barely--and the fact that the movie was so good was just an incredible dessert to the main course. Harris was absolutely at his peak, before he gave into popular vote and the temptation to shoehorn every bit of research into the end result. Black Sunday is a great thriller, and Red Dragon is a top police procedeural, but Silence is the knife edge.

A perennial classic! :-) Interesting but unsurprising that they would remove the Barker quote from the movie tie-in edition, assuming that movie audiences wouldn't know/care who he is, which is just sad, but a great text nonetheless and I definitely consider it horror. Very deeply disturbing psychological horror, so there's my vote :-)

Thanks guys. I thought HANNIBAL was a miserable piece of shit, but can't wait to reread RED DRAGON now. Found a cool '80s edition of it not too long ago, can't wait to feature it here!

Great review. I first read this back in high school and loved it. Of course I had seen the movie by this point given my horror interest, but it didn't mar the book reading experience at all. In fact I think the two work well together. I really enjoyed Red Dragon as well and have been meaning to re-read them both. Hannibal on the other hand didn't do it for me and I haven't touched the other one that came out (don't even recal its name to be honest).

It's definitely high in the pantheon. I read it before seeing the movie and I relate the experience to when I read the Exorcist before seeing the film. Just a damn well written novel. Same visceral pleasure of anticipation. While both books were amazing in their scope and detailed thrills, they are probably the only two horror masterpieces that have companion films deserving of them. Just try and think of another? Lightning struck twice in marrying such great material with the right visionary directors!
I can still remember the thrill of reading this one. That first paperback was the one I had too! I wonder what I did with it?

I'd put ROSEMARY'S BABY in there.

Yknow Griffin, everybody remembers that song from the movie but the track that sticks out for me--and one you hear a *lot* more--is Tom Petty's "American Girl," sung along to by Catherine Martin just before she's kidnapped by Buffalo Bill. That song's a real testament to her strength, resilience, and intelligence when she outsmarts her potential killer!