Creature from the Black Lagoon by Carl Dreadstone (1977): Can't Figure Out Your Watery Love 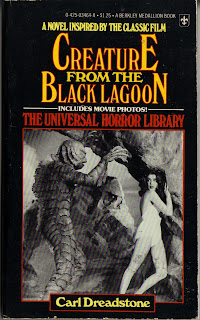 Writing under the unparalleled horror-fiction pseudonym of "Carl Dreadstone," Ramsey Campbell produced a series of novelizations of the classic Universal monster movies. They've long been collectors' items going for quite a few bucks despite being thin mass-market paperbacks from Berkley Medallion. But one day a month or so ago, browsing one of my usual used bookstore haunts, I happened upon Creature from the Black Lagoon... and paid an entire dollar for it! 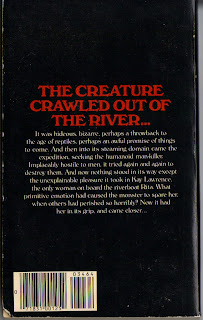 Campbell writes, under his own name, a nice little intro to the novelization about the making of the 1954 film and its various subtexts - sexual, political, evolutionary - as well as the Creature's place in the pantheon of vintage monster gods. Loaded with b/w movie stills (oh, Julie Adams!), Carl Dreadstone's Creature from the Black Lagoon is another cool collectible coup for Too Much Horror Fiction. 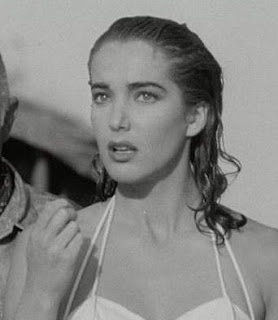 Julie Adams, I'm on a submarine mission for you baby

Update: According to ISFDB, Campbell didn't actually write Creature; somebody named Walter Harris did. Ah well. Campbell did write at least 3 others in the series. Guess I shoulda checked this out first.
Posted by Will Errickson at 11:15 AM

Good question but I have to say - I'm pretty much winging this mother. I just go by how books are priced on eBay, Amazon, and the AbeBooks sites.

Wow, this is really cool. In all my CREATURE collecting, this would be a really cool addition. Thanks for blogging about it :)

Anonymous - I think this blog is a collectors' guide.

I would LOVE to have this book! I have a fondness for movie tie-ins and this one would be a welcome addition to my collection, plus any book with photos of Julie Adams is a keeper.

I own a copy but haven't read it -- I've heard that it's pretty awful, takes great liberties with the source material. But yeah, totally worth owning from a collectible standpoint (and for a measly buck?!) -- and the photos are definitely nice.

I HAVE read Campbell's "Bride" adaptation, remember it being pretty good.

Mac, you're too kind - thanks!

I HAVE read it, and it IS awful. Any resemblance of this book and the movie are purely coincidental. This is another novelization is Creature from the Black Lagoon from 1954 and by Vargo Statton, a. k. a.: John Russell Fearn. But be prepared to pay over 700 dollars for it.

Very nice reprints of the Vargo Stratton version are available at Dreamhaven Books in Minneapolis for a reasonable price (both hardcover and trade paper). They also have at least one copy of the Campbell version (as of last weekend -- but it's been there for awhile).