The Horror Paperback Covers of Zebra Books: What Happened? 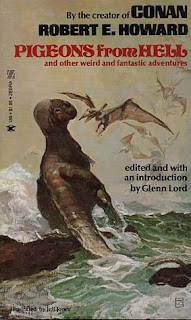 Zebra Books used some ludicrous and cheesy art for most of their paperback originals they published in the 1980s and beyond, but the horror titles they put out in the 1970s had much more vintage-styled covers. Definitely some quality work for their reprints of pulp kings like Robert E. Howard, Frank Belknap Long, and Robert Bloch. Gaze upon the mighty art of Jeff Jones above, in the 1976 edition of Pigeons from Hell. Okay, sure, that's not even close to what goes on in Howard's seminal 1938 horror story, but how can you not be charmed at the evocative mystery of old-style dinosaurs cavorting in the surf? 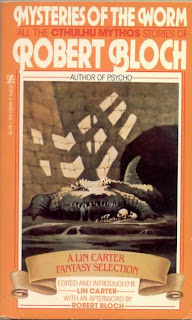 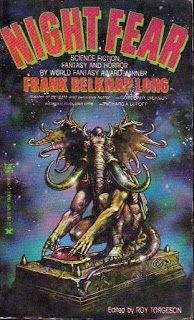 Night Fear (1979) from Long boasts some kind of Elephant Man that I think is supposed to evoke the Cthulhu sculpture from Lovecraft. Art by Clyde Caldwell. 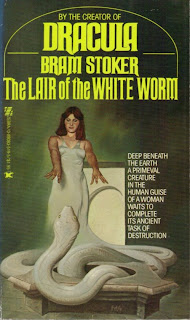 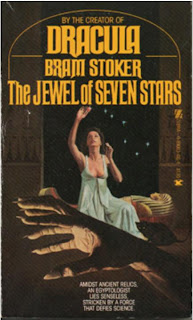 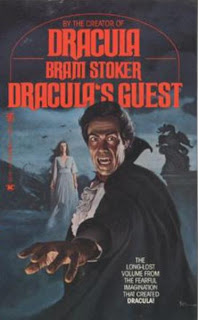 But then as the decade turned, Zebra suddenly switched to the endless procession of dancing skeletons and wide-eyed innocents to sell their books, and a brand-new horror cliche was born. Most just look like Halloween decorations today, and have about as much atmosphere. Consider Wild Violets by Ruth Baker Field: the first cover is from 1980; the second, from '86. 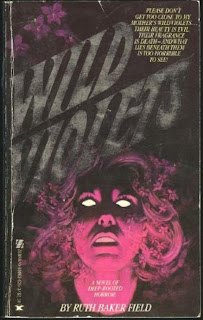 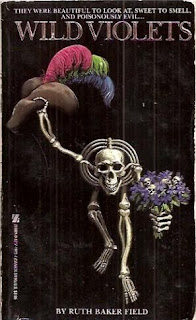 See what they did there? Another example is Leslie Whitten's The Alchemist, published by Avon in 1974 with a pretty cool, well-painted cover that's part of a set with his Progeny of the Adder; 12 years later... ooh, a skeleton and a pumpkin! And Leslie is changed to "Les," because, of course, men won't read books by women... even though Leslie Whitten is a man. 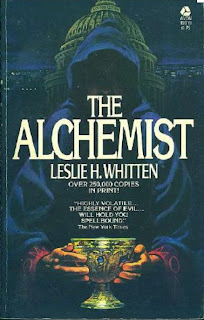 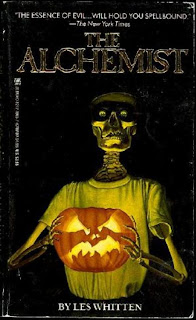 I wonder though what the impetus was for this change: were readers actually getting less demanding? More likely, the horror paperback boom was happening so fast the publishers had to use gaudier, less atmospheric art, as well as those foil-stamped titles, to stand out from other books on the drugstore racks. The genre's covers moved from the otherworldly eeriness of Jeffrey Catherine Jones's art to the skeletal hijinks of Lisa Falkenstern... 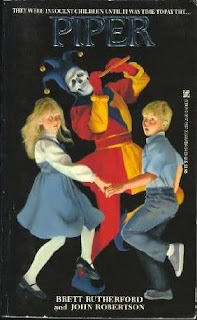 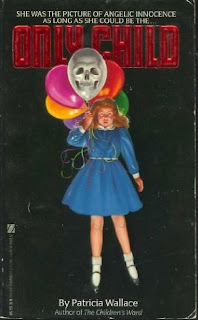 Man, those final two are hideous. I also enjoyed how DRACULA was the biggest part of all the Stoker covers.

These covers were a part of my childhood and I'm able to hate them about as much as I hate Bigfoot And Wildboy, or old Disney cartoons. I miss the foil!
Of course, it was a wake-up call when Books of Blood came out, with Barker's own drawings on the cover. Then I had to admit there was better out there.
The second-hand store in Halifax where I bought that stuff is still there. With the same selection. Why? They still have the books from twenty years back that no one bought!

I'm with you on the fact that 70's covers had much more drama as well as art. The art of Jeff Jones and Frazetta is still being admired but I don't see anyone posting the cover art of "Piper" or "Only Child" and saying it's anything but generic.
The cover to Lair of the White Worm is truly remarkable, If I ever read this book I want it to be the edition with this cover.

The big shift for the Zebra line was that the later books were marketed to young female readers, the same readers who would later buy millions of RL Stine Fear Street books. The seventies titles were definitely aimed more to a male comic book reader audience. The evil children & children in supernatural peril wave of books were essentially driven by teen and tween girls, books for-and sometimes about babysitters.

Anon, that's sort of what I was thinking. Well-put.

Toward the end Zebra improved a bit, with some really creepy pictures of glowing-eyed zombie kids rising out of moonlit ponds and such. But mostly they were awwwwwful! The contrast between those Wild Violets covers is striking. I've got the 1980 one, which is pretty good. The bowing skeleton, though... Jesus, what were they thinking? I need to re-read that book, anyway... I remember liking it quite a bit when I was 13 or 14. It's pretty twisted...

books for- and sometimes about babysitters!!!
caray!!! as we say in Spain and Portugal...

In Spain we hadn't that kind of covers illustrations (the publishers here like modern design for any kind of books) and almost no modern horror, apart from King translated to spanish, so when I link your blog and posted some of these covers in a forum a spanish guy (in a kind of attack of euphoria) said that these books with children and skeletons in the cover are a style of life!!!??? and that the Ramones should had read those books

It's clear from the above that the good covers were tailored to the individual works or series, and the crap-tastic formula covers were pretty much uniform across the various volumes. So not only a serious drop in artisitc quality, but perhaps a serious drop in giving-a-damn behind the scenes about what the hell crap they were shoveling out.

I'm with Nathaniel. Those final two, Only Child and Piper, are effing awful.

Great article as always, Will. I wish genre title covers did go back to the sixties and seventies for inspiration.

I'm with you Will. I LOVE the covers of my childhood -the 60's and 70's. The artworks were things of beauty! I would actually buy used books and read them based on the artwork alone-if it was calling to me . I'm a painter myself . And my style has been influenced by those very covers... And BTW- I don't think I've ever read one of those tacky child/skeleton covers. I stayed the heck away because I just knew nothing inside could be anything but trashy and dumb. They are just repellant. And not in the GOOD way! lol

The elephant thing is Chaugnar Faugn, one of Long's contributions to the Cthulhu Mythos.

David, thanks - that is news I can use!

This is an old post, but I still enjoyed it. I'm a younger reader, so recently I've discovered Zebra's books almost inadvertently with a title Shadow Child by Joseph Citro. The cover is what made me buy it from a local bookstore; the book donned a depiction of a clown holding a strand balloon strings with a skeleton hand. Little did I know, Zebra book covers most often had nothing to do with what was inside of the book, and with that being said, Shadow Child isn't that great of a read and has nothing to do with clowns. These are still really cool collector's items as you can still snag a few from Amazon for pretty cheap. Great blog!

Thanks Crabby! Cool you're digging around in these old posts...

I disagree with the notion that the 80s Zebra books were garbage inside and out. Sure, there were tons of horrible books published by Zebra with lame covers, but there were also some great books and authors given the unfortunate Zebra treatment. Matthew J Costello, Joseph Citro, Jack MacLane aka Bill Crider, Edward Lee, Daniel Ransom aka Ed Gorman and Rick Hautala all published great books under Zebra and they mostly had terrible covers.

Nonetheless, they are still good fun, which is what I think Zebra intended with the line. I mean, not everything can hold literary merit, but some of these paperbacks are still a blast to get through...even if they are really bad.