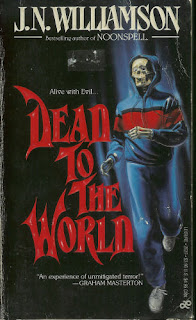 Behold with dismay the tasteless cover art for most of J.N. Williamson's horror output during the 1980s. Published mostly by Leisure and Zebra, he was pretty prolific and won a lifetime achievement award from the Horror Writers of America. Beginning in 1984, Williamson also edited Masques, a series of anthologies that collected the best writers in the horror biz. As for the novels themselves? Never read a word of 'em. More reductive titles that reveal a real poverty of imagination ensure I most likely never will: Horror House? Ghost Mansion? The Evil One? Ghost?! Yikes. What happened to Blood? Spooky House? Scared? It's maddening - and not in the Lovecraftian way.

Above you can see the ridiculousness that is Dead to the World (1988). What the hell? The title, the image, the tagline make not one whit of sense and aren't related whatsoever. But really: a skeleton jogging. Cheap horror paperbacks would try to cash in on any fad. 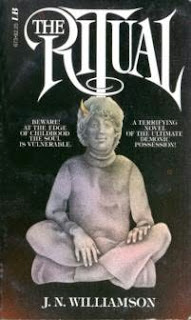 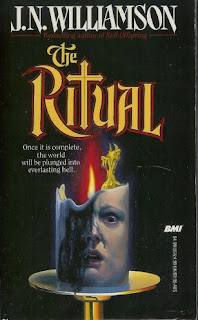 The Ritual (1979) Which cover would you prefer? The original or the '87 reprint? I like how the T is drilled down into that stoned hippie's head. 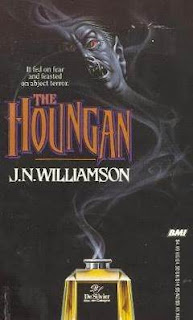 The Houngan (1980) Obviously stealing a march from The Manitou, but missing the point: a houngan is simply a priest in the voodoo religion, not some kind of demonic entity, and it's certainly not a genie. 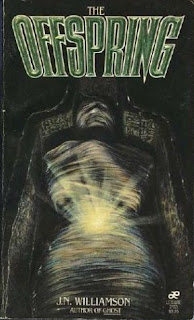 The Offspring (1980) Ironically this cover reminds me of the Dell/Abyss covers. I think it's a mummy. 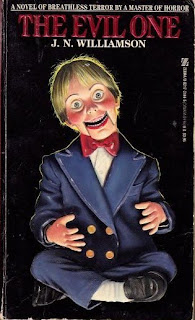 The Evil One (1981) Standard Zebra Books cover art, and one of the most cliched images in horror: the scary ventriloquist's dummy. 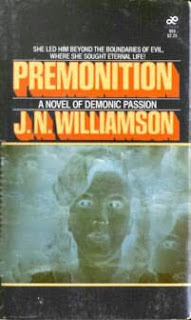 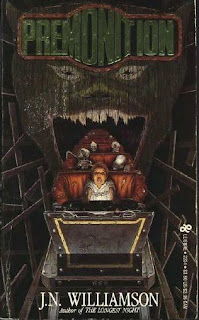 Premonition (1981) The original paperback looks like it's going for those many fans of, uh, Demon Seed and The Entity; the '86 reprint isn't too bad in its utter cheesiness. Poor kid. 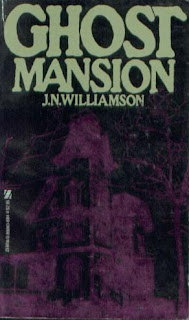 Ghost Mansion (1981) Here's a cash-in on another popular horror novel; in this case, Straub's Ghost Story (which I promise I'll get around to rereading and reviewing some day here) I do however like the sorta photo-negative image. 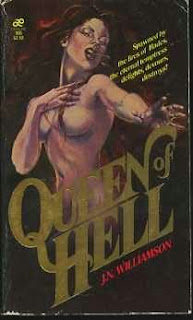 Queen of Hell (1981) Okay, you can't deny the awesomeness of this one. 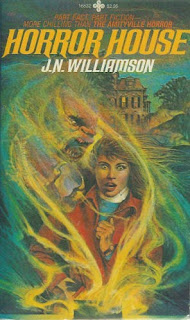 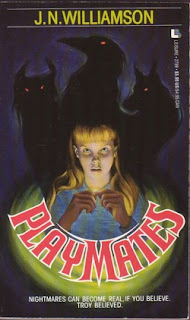 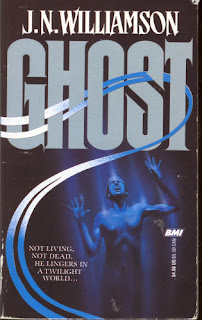 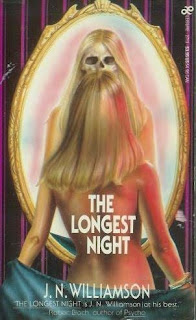 The Longest Night (1985) This title I see quite often in my bookstore hunting. I've nearly bought it several times because I dig this cover; something about skulls with hair totally cracks me up. The conflation of sex and death is a genre mainstay. Hells yeah. 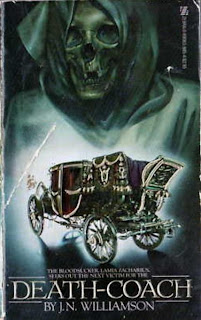 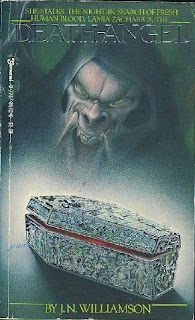 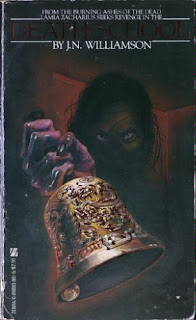 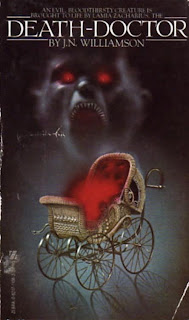 These final four - Death-Coach, Death-Angel, Death-School, Death-Doctor - are from Williamson's Lamia Zacharias series, published in '81 and '82. I could not find anything about them at all as there are no reviews whatsoever on Amazon or Goodreads. However, these covers are not so bad; there's real detail in them, especially in the skull-face on Death-Coach.

Anybody who's read any of these, please, lemme hear your two cents. Is my snark unwarranted? I suppose it wouldn't be the first time.

And special thanks to the Phantom of Pulp, who sent me this cover for The Dentist (1983). 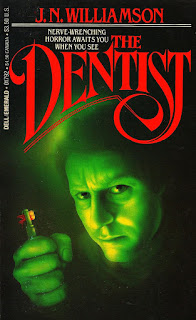 Posted by Will Errickson at 3:44 PM

I've started four of his novels and never finished a one. I always get sucked in by the covers, open one up, and then think to myself, "Oh, right, THIS guy. He sucks". Williamson has one of the most annoying prose in writing. He over-thesoruses every sentence; draws them out with five words where there should be one. They're slow-paced and never live up to the simple premises promised by the back synopsis. I would be curious to see if he has any kind of following.

I read one in high school and can't for the life of me remember much about it. I know it wasn't really all that bad (I would have remembered more about it if it was, ironically), but it also didn't leave much of an impression on me either.

I haven't read any of these (though I have a copy of The Longest Night sitting around somewhere, I'm pretty sure). But I have read another of his paperbacks, The Night Seasons (I think), and I didn't mind it too much. I'd read parts of the original story in Twilight Zone Magazine, and thought it was kind of nifty in a creepy, bizarre, trashy & downbeat '80s horror kind of way. The book itself wasn't quite as wacked out--maybe he had to homogenize it a little for publication--but, if you're not in a particularly demanding frame of mind, I think you could do worse for a weird, breezy horror read.

Very thorough Williamson rundown. I've read some of his books. From memory:

The Dentist -- "pangs of torment ripped through his patients' gums". Pretty awful. More impenetrable language and weird details like a bloke tugging on his ear while speaking. I always remember this because there was no reason to include the tugging.

Death Coach -- Empedocles quotes before every chapter to underline its importance. Language so arch and awkward. Pretty dreadful.

The Premonition -- terribly mistitled. Almost worth reading because it's so ridiculous. Ends with a weird apocalypse in which dinosaur birds appear. I always disliked both covers of these.

Horror House -- very old-fashioned haunted house story. This is one of my favorite JN Williamson books. It's not great, but it's not awful, either. The cover? Hideous.

I think the Dead to the World cover is fantastic, albeit probably not in the way the writer/publisher intended. I really might have to buy the book to see if it can live up to the hilarity of a skeleton jogging.

A few of the others, like for The Ritual, Death Doctor, and The Longest Night, however, are pretty cool.

Is his novel The Dentist the basis for those movies starring Corbin Bernsen (Bernson?) several years back? Those movies weren't bad (the first one wasn't bad, anyway).

The Dentist novel and movies are quite different.

"Spree" is one of my favorite horror paperbacks. I've read it a couple of times and old Dell and Kee are quite memorable ;)

Leave it to me tocomment on a 3 year old thread..but. I had Death Coach for years...I never knew it was part of a series thou thanks for the info..maybe I should dig Death Coachbout of storage and re read it

Rich, thanks for stopping by even years later! You should be able to buy the other books on eBay for pretty cheap. Hope it's worth a reread!

Mort Castle has said good things about his The Book of Webster's book. http://www.amazon.com/The-Book-Websters-J-Williamson/dp/0681415983 Haven't read any of his stuff so I can't say if it is worth a look.

I've never been tempted to read one of this guy's(?) books before-they all looked so generic , and those covers!? Terrible. But I gotta say scrolling through I screeched to a halt at The Longest Night! I thought that the skull had a very lustress blonde beard and said BRILLIANT -but alas, then I spied the naked backside in front of the beard. Curses foiled again!

I found a copy of Horror House today at a used book store that has a much better (albeit cheesy) cover. I can send you a picture if you want to add it.

Bought a bunch of his book back in the day. Just started one, The Houngan. Silly book. The biggest problem is the typos!!! Whoever edited this book should have been fired. Book was never proofed before publication!!