Son of the Endless Night by John Farris (1984): Wrestlin' with the Devil 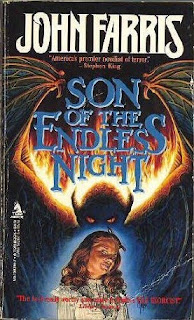 With its wonderfully lurid paperback cover that features a blurb from Stephen King and a review quote comparing it to The Exorcist, and its artwork of both a scary-looking young girl as well as a black-winged demon, Son of the Endless Night is a quintessential 1980s horror novel. Is the little girl in jeopardy, or is she responsible for whatever evil the novel promises? Perhaps a bit of both...

Despite its 500-page length, this reads smoothly and quickly, while the writing is strong as John Farris doesn't dumb down or simplify his prose like many mainstream horror novelists. In fact, he's quite skilled at the odd description and the unexpected simile or clever metaphor. Endless Night is also partly a legal thriller, which was unique but, as far as I could tell, realistically portrayed even when, dare I say, a demon is on trial! 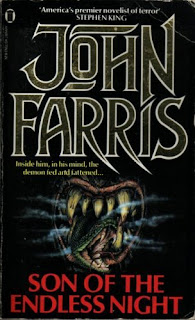 A young woman named Karyn Vale is murdered on a skiing vacation in Vermont by her boyfriend, Richard Devon, in front of a handful of witnesses who are frozen to the spot by the sheer violent intensity of the attack. Using a tire iron, Rich pulverizes the poor woman beyond recognition, breaking virtually every bone in her body. The community is horrified, but from jail Richard tearfully insists to his half brother, Conor Devon, that he wasn't in control of himself when the murder occurred, that he was not in possession of his body or his mind. Rich insists to Conor that he was only trying to help Polly. But who's Polly?

Well, she's a 12-year-old girl who Rich believes was being held captive and abused by a Satanic cult, her father a member, her father the owner of the chalet Rich and Karyn were staying at when the murder occurred. Rich tried to rescue her, failed, then led the police back to the place she was being held, to find - nothing whatsoever. The purported leader of this cult, the mysterious scarred woman Inez Cordway, with whom Rich shared a bizarre and hallucinatory evening, has now seemingly disappeared. Richard, what's going on? 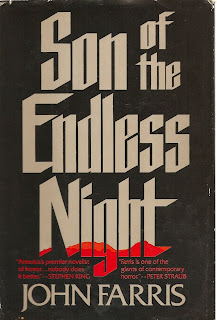 The problem is that hoary old standby of horror fiction, demonic possession. Fortunately Conor was once a priest, although he gave it up to become, of all things, a professional wrestler called Irish Bob O'Hooligan, working on the fringes of the so-called sport, drinking a bit more than he should, hurting a bit more than he should. Now into Conor's not-so-perfect family life - mostly money problems - comes an opportunity to help his beloved half brother. Convinced of Rich's innocence, Conor starts asking old seminary pals who are now bona fide priests themselves just what they know about exorcism and how in the modern world one goes about getting one. Meanwhile, Rich's young, ambitious defense attorneys are gearing up for the insanity plea, as Tommie Horatio Harkrider, a lion-maned and famous criminal lawyer, is hired by Karyn's rich parents for the prosecution. None of them, rational and reasonable to a fault, have any idea what's coming... Surely the legal world is not ready for "not guilty by reason of demonic possession" defense? 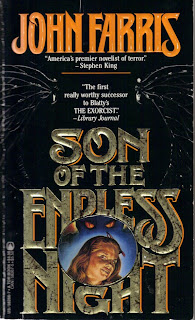 Farris is quite good at creating people with real lives in a real world; his knack for apt and earthy physical descriptions of people is more like that of, say, Robertson Davies than a horror novelist's. One character's skin tone is the color of day-old hollandaise, another has a Southern accent hock-deep in hominy grits, still another has the frosty radiance of a new penny, flaring to red along the taut bonelines. And the sex? Yeah, plenty of graphic sex, but not exploitative, not pornographic; graphic in that Farris captures the carnal thoughts that flit through our minds, as well as the pleasures and pains of the act itself. But not all of Endless Night is about humanity; indeed, Farris also excels at envisioning a demonic presence, a chaos of fire and death and insanity, of untreated wounds and charred flesh, of black vomit and cesspools and mass open graves. Of a world totally corrupt, ravaged and dead as it hurtled one last time around the sun. 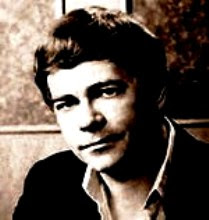 Pretty cool, huh? With all its intermingled characters, sense of place and time, hints at class struggle, scenes of epic terror and violence, and its dramatic unspooling of such a large canvas of events, Endless Night is quite a bit reminiscent of some works by King and Straub. While it veers close to a sort of Catholic apologia in the climax - similar perhaps to the deux ex machina of The Stand (1978) - I still found the novel utterly engaging, the kind you simply devour over a weekend. Sure, there are some tasteless, ridiculous moments here and there (Conor's devout Catholic wife Gina finds herself battling evil forces with broadly-drawn Southern redneck fundies) but that's just what horror fiction fans want, right? Soon as we see that paperback cover art, we know what we're in for, or at least what we hope we're in for, and Son of the Endless Night gives it to us straight, no chaser. 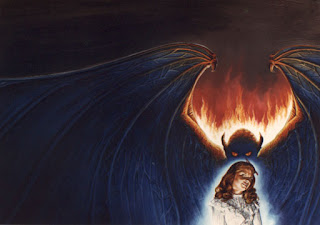 Interior paperback art by John Melo
Posted by Will Errickson at 5:12 PM

Sounds a lot better than I would have guessed, and a hell of a lot crazier too. Nice review.

I have to say I prefer the UK paperback cover, kind of has a Tobe Hooper's "Funhouse" thing going for it, and that's always good.

NOW you're back to a genuine classic Will.
One that's definitely among my top top 20 or so favs if I were make such a list.
Honestly, it's been a good couple of decades since I read it, so I'm not clear as a bell on the details, but I DO recall it being one of those few novels in my long experience to have illicited some REAL chills whilst I was reading it.
Twas chilling stuff for sure.

Should you find yourself in the mood for another dose of Farris anytime soon, I suggest his SACRIFICE. It's not a big, thick magnum opus like SON OF THE ENDLESS NIGHT is, but a slimmer, high intensity quick read.

Aaron - The UK cover is also relevant to the story, which is not always the case!

bluerose - I will track down more of his stuff. I've heard that Farris's favorite of his own books is THE UNINVITED, a ghost story (unrelated to the classic '40s movie).

The only Farris novel I've read is Phantom Nights, which was rather underwhelming in my opinion. People rave about him though, so I should certainly read another book and hope for the best. Sounds like this one might be the one to go with.

I have a suggestion for a future blog post: "Books that have a tagline comparing it to The Exorcist or The Omen or Rosemary's Baby". It seems that back in the 70's everyone wanted to compare themselves to those 3 classics.

I suggest FIENDS or WILDWOOD.But all of his work from the 80's is wonderful.

Ive looked in book stores, ive looked in thrift stores, anywhere they sell books an even the library. I cant find it. I first began reading it in 9th grade about 6 years ago, i regret that i didnt read it sooner because i never finished reading it. If anyone has a suggestion of how to get it please let me know. Ive been looking since i gave it back to my old school. I cant buy it offline, ive. No way to. Please email me a suggestion. kathryn.renee@hotmail.com

Harley, it's on kindle, along with almost the entire Farris oeuvre.

I've read it 4 times and each time it makes me laugh,in part, but always scares the crap outta me. I wish they'd make a movie outta this cause I haven't seen any really scary stuff since the Exorcist.