More mutant rodent mayhem from one of England's most famous purveyors of pulp horror, James Herbert. In the first sequel to The Rats, his repellent 1974 shocker, Lair is both more of the same and less of the same. Set five years later, the graphic scenes of rats attacking helpless humans are intensified while the aspect that made the first book really uniquely enjoyable - colorful snapshots of the various social classes of England in the 1970s - has mostly been jettisoned. 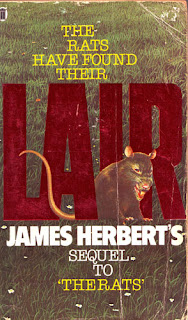 Rather, we get what I thought were quite boring meetings of various political factions: there are forest keepers and ratcatchers and scientists and law enforcement and commissioners and secretaries and ministers who bicker and fight over 1) whether the detestable, enormous black rats have returned or not, and 2) whether to do anything about the threat, if it exists, at first or not. You know, because it's such a pain in the ass to take precautions against two-foot long voracious rats with razor-sharp fangs and claws who love to burrow into the meat inside human skulls. That's gonna be expensive. 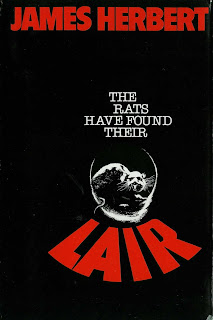 This time, the vermin that have overtaken the enormous wilderness preserve of Epping Forest, 6,000 acres of woodland just outside London, and are better at hiding themselves after an attack. For awhile, many officials remain skeptical of the danger in the woods of Epping. It's all too much like Chief Brody and Hooper trying convince Mayor Vaughn there is a hungry shark in Amity's waters. I find this is a common problem with "creature horror" post Jaws. 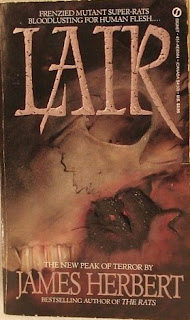 Despite some well-orchestrated scenes of epic rat violence against our fellows - a troop of Boy Scouts, entwined lovers, a faithless vicar, a squad of soldiers - the kind of thing Herbert does so well, I found myself skimming the final chapters, waiting for the twist I expected, but with no emotional investment whatsoever. The second half is one gory attack after another, so much so that they become numbing and inconsequential, grim and meaningless. Herbert throws in ridiculously graphic sex for (what was once known as) the raincoat brigade and adds a love triangle, but not out of any feeling for human relationships: this is simply for the dictates of pulp. Which is fine, but overall Lair is a bleak, callous affair; Herbert doesn't seem to be having any fun. And that, of course, means no fun for the reader - well, at least this reader.
Posted by Will Errickson at 9:30 AM

I have to disagree with your final sentence, I had a lot of fun with this. All I have to say is one name: Brian Mollinson! - possibly the greatest character in any British horror novel. Humour of the blackest vein, something Mr. Herbert excels at.

Ah yes, Mollinson: a member of fine standing in the raincoat brigade!

I gotta chime in on your Herbert verdict as well Eric-with a BIG NAY! I had seen his many books around and heard about his gory rep. So I read one called The Cottage-hoping for a scary Brit haunting,as only they can do! But what I got was a not scary at all collection of orgasms of a graphic persuasion! And call me silly-I'm def no prude-but it struck me a bit like getting your peanut butter in my chocolate! In other words-jarring.They just don't belong together. If I want a good scare-that's what I expect to get .Not false advertising and boring porn! Suffice to say-I never will pick up another of his books-assuming that's his regular MO...!!

Shaun Hutson's "Slugs" kind of got bogged down with the discussions and pseudo-science of the whole thing as well, but he pulled it off a little better than Herbert does (not that that's saying a whole hell of a lot).

Was the slug-thing in this one or was that third? Damned if I can remember.

highway - don't get me wrong; I enjoyed The Rats and back in the day, The Fog as well. I simply found this title so action- and violence-oriented, rather than being scary or exciting, it was just boring in many places. Shaun makes a point: the flasher Mollinson is good for some pathetic laughs.

Aaron - I didn't really dig Slug and don't recall much of it now. Seemed pretty much a straight ripoff of Rats. There are "slug-things" in Lair. And I have heard that Domain is the best of the lot. I've got it, so maybe one day...

"Raincoat brigade"? What exactly do you mean by that phrase?

I'm a big fan of Herbert's from way back.
I've got everything he's done with the exception of FLUKE, '45 & PORTENTS. Other than those three though, I've read 'em all.
Can't say that LAIR was one of my favs though. As I really don't remember much about it.
Don't let that put you off the finale of THE RATS trilogy though, as it's really quite good.

Since you've reviewed both The Rats and, now, Lair, you've got to follow through with Domain. One of Herbert's best novels and one of my all-time favorites.

Yes, I still plan on reading Domain at some point; I have it, and I've heard from a handful of horror fans it's quite good.

Got to disagree with you there. Lair was a fantastic sequel to The Rats!

I love Lair. It's pure assumption to state that Herbert threw in the sex for the raincoat brigade and for no other reason. Herbert (and other British writers) has always acknowledged that human beings have sex, so why can't it be part of their lives as depicted in these novels. During this period ('70's/'80's), American horror writers steered well clear of it. The action/carnage scenes in Lair are beautifully written, and the sex is hugely erotic. The tale of the couple having an office affair is raw and engaging. For mine, Lair is a most natural sequel to The Rats, and paved the way for a larger scale Domain.

I have wondered about the lack of explicit sex in American horror of that vintage era - Russell's THE INCUBUS being a huge exception. Maybe if I'd waited longer to read LAIR I wouldn't have had the same impression of it. But I do have DOMAIN and still look forward to reading it.

Good point, Will. I read LAIR when it came out, so I was on a fairly natural Herbert trajectory. Yes, INCUBUS was a huge exception. Although sex is heavy in the small press, it's rarely a major component of a mainstream horror. Weird, really, because sex is a major component of our lives and psyche.