The Hounds of Tindalos by Frank Belknap Long (1946): Hunt You to the Ground They Will 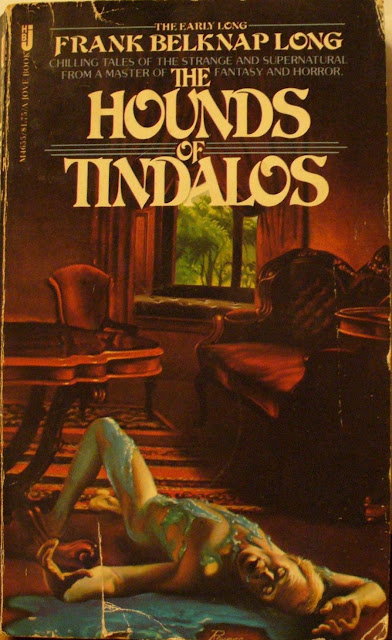 While countless horror writers have contributed works to Lovecraft's immortal Cthulhu mythos, it is Frank Belknap Long (pic below) who was the very first to write such a story after encouragement from Lovecraft himself. One of Lovecraft's close friends and correspondents, Long's "The Hounds of Tindalos" first appeared in the March 1929 issue of Weird Tales. These nightmarish creatures became part of Lovecraftian mythology and were used by other writers in the field such as Ramsey Campbell. 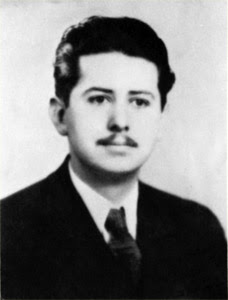 I first read the story in high school, thanks to a beat-up paperback of August Derleth's Tales of the Cthulhu Mythos, Vol. 1, furtively passed to me during some droning lecture or another in the auditorium. With other works by Clark Ashton Smith, Robert E. Howard, J. Vernon Shea, Derleth himself, etc., it was a good intro to the Lovecraft circle. But it was always Long's tale that somehow stuck with me; read, if I recall correctly, in high-school detention hall (did a lot of horror-fiction reading there, which was actually the cafeteria). 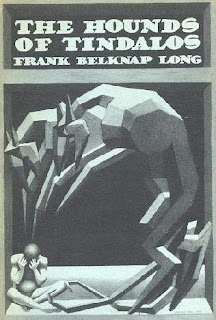 "The Hounds of Tindalos" themselves are extra-dimensional entities who move slowly through outrageous angles of space/time - not the curves - and seek to consume men who, like Chalmers, the rebel "scientist" whose misadventure the narrator relates, discover the abyss before life itself. Aided by a drug he claims was used by Lao-Tse to discover the Tao, Chalmers finds his way to this fourth dimension and is terrified by these "hounds," whom he describes thusly:


All the evil in the universe was concentrated in their lean, hungry bodies... They scented me. Men awake in them cosmic hungers... But they are not evil in our sense because in the spheres through which they move there is no thought, no moral, no right or wrong as we understand it... There is merely the pure and the foul. The foul expresses itself through angles; the pure through curves.

And chaos ensues as Chalmers vows to return and then meets either the hounds again or the Doels - I have no idea who they are, Long simply inserts a reference to them. Are they the Lovecraftian dholes? Perhaps. As in the other stories here, Long also invokes ancient Greek myths, but it's been awhile since I've dipped into Hamilton's Mythology, so I was glad for the refreshers he provides. Chalmers' final writings include a hilarious "ahhh" as if he were transcribing his own screams! Oh, Lovecraftian cliches, how we love them so... 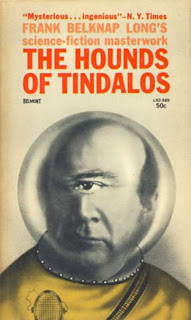 I picked up this science-fictiony style collection in a great used bookstore in Hollywood; it doesn't even list Long's name on the spine, as it only reads The Hounds of Tindalos: "Science Fiction Masterwork." I have never seen anything like that on any other book. Personally I really dislike this cover; there are no astronauts in this collection, one-eyed or not. Just seems like some artwork the publisher had lying around the office, just waiting to be used. It contains about half of the stories from the original 1946 Arkham House hardcover; from Jove in 1978 came its second paperback reprint as part of the "early Long" series, which included some perfectly grotesque cover art by Rowena Morrill (see top). Publication history gets confusing but I believe the other half was republished in paperback form in The Dark Beasts, which has a cool Edward Gorey cover. 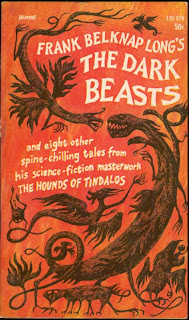 As for the other short stories herein, I must say nothing really jumped out at me as much of anything special; a lot of standard-issue pulp product, decently written but certainly not deathless. "The Space-Eaters" is somewhat atmospheric and has a character who is obviously Lovecraft himself, but it seems to be part of that "Christianizing" of the mythos, reducing the drama to simplistic good vs. evil battles - despite Long considering himself an agnostic and sharing Lovecraft's skepticism of religious claims. "Dark Vision," has a young man who can read the thoughts of others, finding minds are cesspools of maggoty hate and carnality and revolting spite. In "Fisherman's Luck" a Greek god with a love of pranks returns; "The Black Druid" concerns an evil overcoat. Weird Tales completists will probably enjoy these stories the most.

Despite nearly 70 years as a prolific author, Long died in abject poverty in 1994.

Posted by Will Errickson at 9:00 AM

God, how I love books with Edward Gorey covers! Tis a pity Long died in poverty, when his works have enriched the field of horror literature so much.

I've read Hounds of Tindalos and Space Eaters in two separate anthologies, and While Hounds does have the more iconic creature, I rather liked Space Eaters a little bit more.

Particular that final image of a beam of light spiraling up into the heavens from a hole in a character's head...

The fact that he did die in poverty saddens me, though hopefully life wasn't too hard near the end for him and his wife.

The dholes and the doels are one and the same I believe, though neither are particularly important in this or any other narrative that I know of unless you count the Tremors movies.

Hounds is a great story though, even if the title has lead a lot of authors to paint dog-like demons rather than what the creatures are actually described as. Either way anything is better than that spaceman cover.

A Gorey cover justifies buying a book all by itself. Fortunately, they usually appear only on books that are really good or at least promise to be interesting.

Hi Will,
I have that first luridly colored Long paperback-got it for the cover mostly since i find his stuff rather palid.BTW and OT: When you visited L.A. which used bookstores did you shop at? I'm wondering if I have been there...The Iliad is a good one for paperback horror titles.It's in the Valley on Cahuenga,or is it Lankershim...? Anyway,yeah.
Ray

Yes, it was the Iliad! On Cahuenga and Chandler. Man did they have a phenomenal selection of paperbacks! Also lots of hardcover limited editions of horror & SF. My girlfriend got a bunch of Harlan Ellison titles, which are always hard to find.

It takes me forever to sift through the PB horror shelves there! haha But shhh ,maybe we should keep it a secret!

I think that "The Space-Eaters" is one of the all-time greats. I love how Long paints Lovecraft as an insufferable, egotistical douche-bag. It's quite hilarious, and probably somewhat true I would imagine.

Yes! I don't think HPL quite learned how to hang loose till the very end of his days, alas.

I'd have to agree that The Space Eaters being part of "Christianizing" the mythos--I guess even agnostics prefer to believe in dichotomies of good and evil. What I found most interesting was how (as in Bloch's "Mysteries of the Worm") Lovecraft himself shows up and then buys the farm. It got me wondering how many authors have killed Lovecraft off in some gruesome fashion.