The Wolfen by Whitley Strieber (1978): Werewolf? There Wolf! 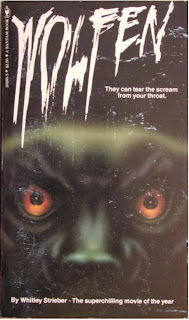 How does it feel to be ripped to pieces: will there be desperate agony or will some mechanism of the brain provide relief?

Total coincidence, but here's yet another novel that works in both the crime and the horror genres. Less well-known than its loose 1981 film adaptation with Albert Finney, Whitley Strieber's The Wolfen is a mainstream thriller through and through but with a strong evocation of, and rational explanation for, vampire and werewolf myths throughout history. The Wolfen are a superior species of wolf-like creatures who have till now hidden themselves from civilization. While certainly not evil by any means, the ferocity and intelligence with which they dispatch of their human victims lends them a malevolent yet fascinating nobility and grace. 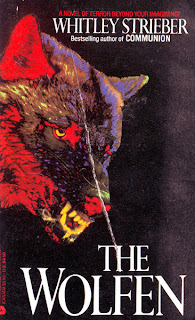 The police procedural aspects are in full effect from the start: detective partners George Wilson and Becky Neff are total opposites, a veritable Felix and Oscar of the police force who are much resented by their superiors; Wilson is an aging lazy slob with a real attitude problem, and Becky - well, Becky's a woman. And for mid-1970s New York City cops, that's practically a crime itself. Even Wilson seems to resent her, when he's not falling for her. The novel begins with two hapless police officers finding themselves face-to-face with the terrifying Wolfen in a city impound lot, and then torn apart before they can barely reach their weapons. The grisly attack baffles and sickens the police force, and Wilson and Neff get down to the exhausting business of tracking the killer. Of course they have no idea what they're up against. 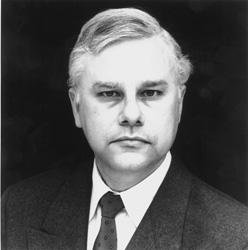 At a loss, Wilson and Neff enlist Ferguson, a zoologist from the Museum of Natural History; he does some serious research based on the clues they've given him and realizes these creatures were the impetus for the werewolf legend. More primitive people, coming into contact with the Wolfen, couldn't believe that animals so smart weren't part human... Ferguson begins to respect the Wolfen, and thinks he can communicate with them peacefully. You know how that's gonna go. 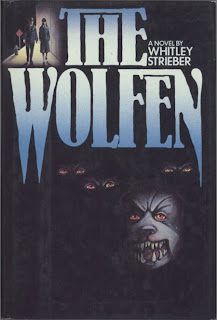 Now, if you can believe that these super-wolves can exist alongside mankind and yet not leave behind any trace of themselves, you're probably really gonna love The Wolfen. In fact I had a bit of a hard time suspending disbelief at first, but Strieber is skilled and convincing in presenting a fairly believable pack of intelligent and cooperative creatures and their thought processes. What makes the novel unique is this depiction of their furtive lives on the fringes of human society. There are some terrifically suspenseful moments when Wilson and Neff inadvertently come close to the Wolfen's lair in an abandoned building. Lots of police department and city politics may detract from the eerie fact that the two cops are now being stalked through the city by these "monsters," and high-rise apartment buildings are no protection. These animals know that the two humans are aware of them and it angers them. When the Wolfen ambush on Neff and Wilson fails, they go after Dr. Evans, the medical examiner to whom the cops revealed their suspicions:


Then they were on him, pulling and tearing, ripping full of rage, spitting the bloody bits out , angry that the two important ones had been missed, angry that this one also dared confront them with his evil knowledge. They had cracked open the head and plunged their claws into the brains, plunged and torn to utterly and completely destroy the filthy knowledge. 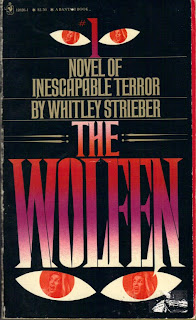 The paperback at the top (Bantam 1981) seems like the movie tie-in edition, while this bland and amateurish cover, the first-edition paperback (my copy, Bantam July 1979) basically meant the publisher was trying to appeal to the widest possible audience, people who wouldn't buy one of those down-market trashy-looking horror novels with their lurid paperback cover art. The Wolfen simply don't go after screaming blonde ladies as the pupils of those stupid cut-out eyes insist. That said, the book should still find a pretty wide audience because it is definitely a gripping, suspenseful, scary read; I found it compulsively readable. Strieber's first novel has a good balance between pulpy creature horror and investigative police procedural, between awe and wonder at the predatory perfection of the Wolfen and the stark inescapable fear their kind will always engender in that weaker and stupider species, mankind.
Posted by Will Errickson at 7:53 AM

I have only read Strieber's much better known The Hunger (also made into a movie) and have seen The Wolfen movie but not read the book. I remember when seeing the movie that it was a bit of a letdown that the creatures were ordinary looking wolves and not werewolves.

I can remember very little about THE WOLFEN. Other than how incredibly fast the creatures were supposed to be & the Ingram gun that one of the protagonists used in order to deal with it. That, as well as the fact that the Wolfen chose to live side by side with man in their urban landscapes for some reason or another...
I must have enjoyed Strieber's work as I own & have read four of his novels, but oddly enough, I don't have any real, lasting impressions of them.
Which is odd, in that I can remember many other books that I read decades ago with such clarity, even those that I didn't particularly enjoy. But, his stuff? Not so much.
Maybe that's why I never read any of his post-THE NIGHT CHURCH books.

I enjoyed the book and the movie, but the movie had to grow on me. The thing that made the book intriguing to me was that a substantial part of it was told from the Wolfen's point of view, and the only way to convey that in the film was to use heat vision POV, like "Predator," and to put in the Native American eco subplot to explain certain aspects of the story. I found that pretty hokey at first, but images from the film haunted me, and I watched it again. I used to be a big fan of Streiber, but I found him hard to take seriously after "Communion," which I found monotonous and not very credible.

I spent a wonderful summer with this book when I was growing up. Summer for some reason, maybe because there was no school, was when I'd read lots of horror novels. About seven years ago I read it again. Still a nicely gripping little horror tale. Liked the film as well. Though I was disappointed how they changed the Wolfen themselves.

Read it growing up. It's part fantasy, part horror story.

I read this a couple years ago and just didn't care for it. I think it was because I didn't like the blend of crime and horror, or at least didn't like the way Strieber did it. It felt like an episode of Law & Order had a cross-over episode with Supernatural.

It's strange but I rarely re-read books, even the ones I love. It has been a number of years since my last read of Wolfen, but it stands out as one of a handful of books I owned and actually re-read a few times through my teens and 20's. I always appreciate a solid creature story.

Thanks everybody! I can't wait to get around to reading The Hunger; it's got great '80s cover art.

The movie is worth watching--it's on Netflix Instant right now and I watched it immediately after finishing the novel--but the Native American aspect seriously dates it.

Prof, thanks for the link; I am unfamiliar with that work. I've read few werewolf books!

Rabid Fox, there were a couple moments where I was put in mind of L&O, point taken.

Check out the movie the dream team with Michael keaton. There's a great scene where keaton uses the story of wolfen to scare the bejesus out of his fellow mental patients.

Lee, that sounds hilarious! Thanks for letting me know.