The Mind Parasites by Colin Wilson (1967): The Villain with a Thousand Faces

The British writer Colin Wilson published his best-selling first book, The Outsider, when he was just 24. A work of existential philosophy about the role of the misfit artist in the modern world, it seems not far removed from the concerns of some of Lovecraft's stories, particularly the one with the same title. In his preface to The Mind Parasites, Wilson talks about his first experience reading Lovecraft and how much it affected him, obsessing not only over the fiction but also Lovecraft's life. He states he intended this novel to be a tongue in cheek and affectionate tribute to the Providence gentleman but I don't, however, think that Wilson knows just what "tongue in cheek" and "affectionate" mean: a more dour and self-serious piece of fiction I have not read for this blog! 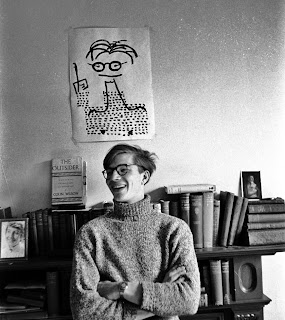 A handsome lad he was: Wilson in 1956, not looking so serious

At first I was intrigued as the story built up slowly, with all the kinds of faux-scholarship that one finds in Lovecraftian fiction. The unexpected suicide of the narrator's old colleague sets everything off, of course. This narrator, archaeologist Gilbert Austin, then discovers mysterious remains of a huge, heretofore unknown civilization two miles beneath the surface of the earth; yes, it seems Lovecraft's tales were based on fact, "discovered" by the "racial consciousness" of which Carl Jung wrote. This leads Austin and a fellow investigator to suspect the existence of a malevolent race of entities who seek to undermine man's free will and natural "evolution." But as the philosophical concerns began to make themselves more and more present and long-winded, I was distracted by Wilson's know-it-all superior tone. Much of Mind Parasites is a pompous bore, stuffy and fairly pretentious; a stereotype of the intellectual Englishman enamored of his own thought processes and insights. 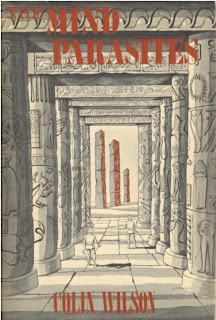 
Austin - an obvious stand-in for the Wilson himself, if one looks at Wilson's other writings - is nearly obsessed with those "superhuman geniuses" that have blessed mankind with their existence: fuddy-duddy cultural folks like Goethe, Mozart, Nietzsche, Shaw, Wordsworth, and other musty white dudes (always white, always dudes) from the dark ages who the narrator sees as life-affirming artistic forces. But sometime after the 1800s these parasites gained control of men's minds and forced on them triviality and boredom and submission to base appetites, producing folks like de Sade and Hitler as well as making the average person a total loser too.

The parasites of the title are an ancient vampiric alien race, the Tsathogguans, who reside not in the depths of the sea or on the plains of Leng but in our very minds, feeding on us as a cancer and bending human history to their will. As a metaphor for the neuroses and fears that prevent humanity from living up to its own potential - or at least certain individuals from doing so - it isn't bad; it is just too obvious that Wilson has made Lovecraftian lore a vehicle for his own intellectual pet projects. This gets tiresome fast, and there is no irony or charm here to mitigate this high-mindedness:

The sheer size of the task overawed us. Yet it did not depress us. No scientist could be depressed at the prospect of endless discovery... we found ourselves looking at the people around us with a kind of god-like pity. They were all so preoccupied with their petty worries, all enmeshed in their personal little daydreams, while we at last were grappling with reality - the one true reality, that of the evolution of the mind. 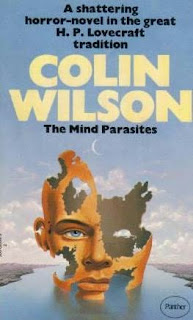 
This my be overly critical but I also found Wilson lacking in imagination in the science-fiction department: in his future world of the early 2000s (!) he imagines still playing records on gramophones, calling the British Museum itself to look up simple facts about a previously unfamiliar American writer named Lovecraft, and reading the evening paper. Yeah, I know, that's not really Wilson's job here to completely re-imagine the future like a Clarke or a Gibson but I certainly found it off-putting and dated. Writing a Lovecraftian tale was not something Wilson had even entertained until August Derleth himself suggested it in their correspondence.

If you know anything about the literary avant garde of the 1960s you might find Mind Parasites to your liking; the (half-baked?) ideas of Aldous Huxley, Wilhelm Reich, William Burroughs, and other like-minded writers are referenced, sometimes directly, sometimes obliquely (surely the author described as having "a high reputation among the avant garde for his curious blend of sadomasochism, science fiction, and world-weary pessimism" could be none other than Burroughs). The whole concept of psychedelic drugs and mind expansion plays a part in the novel, which interested me for about 10 minutes when I was 20 but I admit no specific concern in that area today. Throw in psychokinesis, or "PK energy," and I'm tuning right out. 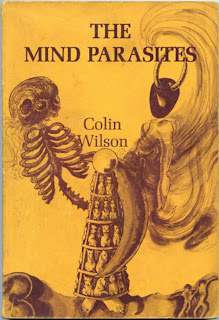 Yes, all this is pretty heady stuff for a simple horror fiction read; its impetus may have been Lovecraft but the style reminds me more of H.G. Wells, while the appropriately "cyclopean" cover art (Bantam 1968), despite the spaceman, appealed to my love of vintage SF imagery. Less a straight horror novel than science fiction philosophy of an immature and cranky sort, its relationship to the Cthulhu mythos might make The Mind Parasites of some interest to completist Lovecraft fans, but the general horror reader can probably pass.
Posted by Will Errickson at 6:22 AM

Sadly, this is another "name" author whose work I've, oddly enough, never gotten around to reading. Either fiction or non-fiction.
Though I've come close on several occasions.
Especially with regards to his THE SPACE VAMPIRES. I believe that I may have actually owned a copy of it within a couple years of it's release in paperback & the release of Tobe Hooper's gloriously over the top adaption of it, LIFEFORCE. But, somewhere along the line I lost track of the novel.
Which, being a collector as well as a reader, REALLY pissed me off as the copy I had was rather rare from what I understood.
The same thing happened to my 1978 copy of Ray Russell's THE INCUBUS, Michael McDowell's KATIE & a couple of others over the years.
Not a lot mind you, but enough to make it "smart" as the copies I had are long out of print.
Needless to say, I stopped loaning out books of mine a LONG time ago.Especially anything that's even remotely collectable.

How about you Will?
Like all collectors you MUST have a horror story or two...

Hm. I was a huge fan of The Outsider and The Occult. At least, I was a huge fan of them when I was in my early 20's - even though they are still on my shelf, I've not thought about Colin Wilson in MANY years. I knew he wrote fiction, but was never drawn to pick anything up. After this review, I know now to proceed with caution...I might just pick up The Outsider again, though....

I haven't loaned out a book in, oh, 20 years after losing my beloved copy of HPL's BLOODCURDLING TALES to a high-school classmate. Once we graduated, I didn't see her again until the 20-year reunion... and seriously entertained the thought of asking her if she still had it! ;-)

Sadly, the only one I trust to let read my books other than myself, is my wife. And that's 'cause she's under the same roof as I am! LOL
I won't even lend them to my daughter anymore as she wound up losing one too many on me by way of the dreaded RE-lend once she moved out on her own, which I specifically asked her to NOT do.
So, while these days I'll buy her her own books, I won't lend her mine.

I had to read this pretentious bore of a novel for a lit class in college and immediately hated it. Hated its presumptive attitude, hated that it was smarter that it thought it ways, hated that it tried to look down on the Cosmic Horror Story while stealing from it ruthlessly.

I tried to bring all this up to the professor and to my class mates as a terrible piece of Lovecraftian horror without knowing how to make it work and got a lot of blank stares.

The professor didn't even know who Lovecraft was, how do you teach a book in a lit class and not know where it came from?

Every time I see mention of Colin Wilson or this novel, I get a little ball of disdain that wells up in my gut.