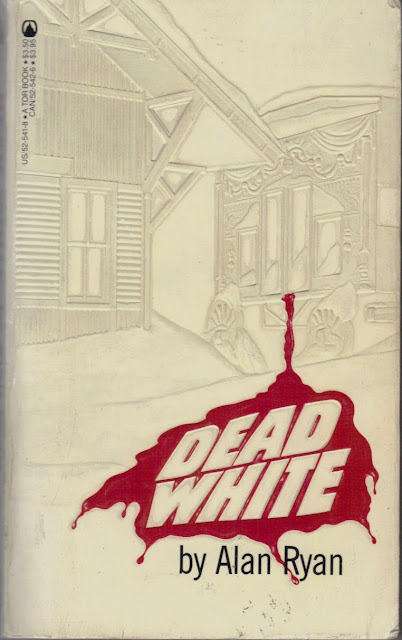 We all know good writing and we all know bad writing, but what about the stuff in-between, writing that simply exists on the page without any atrocious similes or tone-deaf dialogue or unbelievable coincidences, no passages that take poetic flight or shine with human insight, writing that only tells a story quietly and efficiently? I hardly knew it was possible to write in such an unadorned manner until reading the paperback original Dead White (Tor, Nov 1983) by Alan Ryan. A detailed moment here or there in the narrative made me think this book was Stephen King-lite, but even that is inaccurate as King's style is famously colorful, homespun, and even vulgar; Ryan can barely be said to have a style at all. Which isn't necessarily a criticism, for the story itself, as well as the suspense generated by short, time-stamped chapters, is just enough to keep a casual reader's interest. 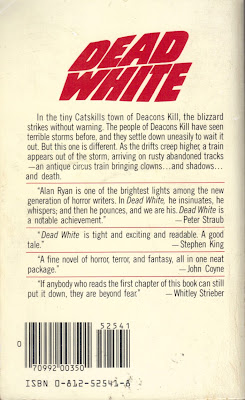 The setting is comfortably familiar: the New York Catskills town of Deacons Kill is beset by an enormous snowstorm that cuts it off from whatever civilization exists outside it. Endless, but not quite tiresome, descriptions of the hushing nature of snow abound. In fact that got me to ruminate that, at least to me, cold weather seems quintessentially "horror" in the same way that a very hot weather seems quintessentially "crime." Think of At the Mountains of Madness or The Thing, The Terror, The Dead Zone, or The Search for Joseph Tully, then think of Body Heat or the greenhouse opening scene in The Big Sleep, or the entire sub-sub crime genre of "Florida noir" and writers like Elmore Leonard, Charles Willeford, James W. Hall, and Carl Hiaasen. But I digress.

Into this snow-blasted landscape comes a mysterious old train bearing the legend Stanton Stokely's Stupendous Circus. And you know what comes with a circus. Yep, clowns. Ryan does creepy clowns pretty well; nothing too blood-chilling but still. As for the characters, I almost want to call them cliched: the stern but kindly old doctor, the first-time sheriff who knows everyone in town is waiting to see if he'll screw up, the young woman who is learning to assert herself, the beleaguered husband and the harridan wife, the bratty little kid, the superstitious old black woman, the weird circus ringleader who speaks with polite gentility, and oh yeah, those ghostly clowns that float and cavort silently in the snow. Ryan takes all the time in the world to get to where he's going, but it's an inoffensive little journey, a slow build to a fair-enough climax. Dead White does what it does just well enough so it doesn't seem a waste of time. If that sounds like a recommendation, it is; if not, that's cool too.
Posted by Will Errickson at 9:40 AM

Will, this is probably as apt a review as this book will ever get. It seems like you had a good time with it, but you don't want to oversell it. When I read it earlier this month I was put into a very serendipitious reading experience. As I was curled up in a very comfortable chair, the Holiday Train (a hundred-some-year old festively decorated train that tours North America during the Christmas season) passed slowly by my window, and my imagination pretty much sparked after that, and the book suddenly had the atmosphere of that day. You're right about it having no distinct style, and somehow that dosn't make it a bad novel. The closest thing I can compare it too is T.M. Wright, but with a more middle-of-the-road approach. I've had Allan's THE KILL sitting on a shelf for years, and I'm anxious to get around to it soon.

Wow, I envy you both in that you were able to experience this novel for the first time just this month. That's so cool.

Me?
I read it when it first came out back almost three decades ago ( ah, to be 20 - 21 again... ) when I distinctly recall thoroughly enjoying it. Fact is, I quite enjoyed all of author Alan Ryan's genre output in the early '80s.
Which, unfortunately was just the one currently in discussion, the aforementioned THE KILL, CAST A COLD EYE & a book of short fiction who's name I can't recall at the moment, but which I borrowed from my local library back in the day. Which, to my knowledge, never did make it out in paperback ( or I'd own a copy like I do his other three ).
After that fairly prolific output in '80 - '83-'84, the guy just seemed to disappear though.
I'd always hoped that the author would resurface at some point, but now, after all this time, I've given up on that liklihood.
So, I just fondly recall his brief time in the field & the enjoyment his work provided back then.
Which, this review thankfully reminded me of.
Kudos & a belated Happy Holidays.
Peace.

Thanks for the comments, guys.
Anon, I do intend to read some T.M. Wright!
Bluerose, it took me forever to find info on Ryan online; apparently he goes by Alan PETER Ryan these days after another author with the same name became popular.
Penny, who doesn't? There will be more...

Read it recently and enjoyed it. Some good passages, even spooky at times. But I totally get what you're saying. The novel's not great but not bad either.

His short stories are terrific, like "Following the Way," "Tell Mommy What Happened," "Death to the Easter Bunny!" and "Onawa," all published in various good horror anthos of the '80s. I enjoyed his novel CAST A COLD EYE more than DEAD WHITE.

Just finished this, and had a good time with it - really enjoy the 'small town in peril' subgenre, and this was a pretty good example of it. Didn't realise that 'The Kill' was set in the same town, so will bump that up the pile.