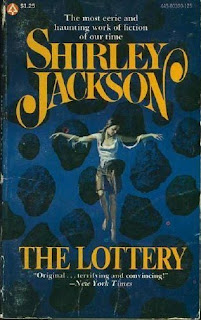 "The Lottery" is easily one of the most famous, and notorious, short stories of the 20th century (I love making big pronouncements like that but in this case it can be said truly). When it was published in The New Yorker in 1948, it caused unforeseen outrage amongst that venerable publication's readership; canceled subscriptions and indignant letters poured in. Author Shirley Jackson was nonplussed and surprised by the reaction; some letter-writers actually wanted to know where they could go to watch such "lotteries." Even her parents, she said, did not like it! It's a deceptively chilling and primal tale, simple in its effect, perhaps bewildering in its meaning, ultimately unforgiving in its indictment of humanity. Long an essential text in American schools, I'm sure "The Lottery" has stunned and maddened countless kids who were forced to write essays on that most famous bane of frustrated high-schoolers, the dreaded symbolism. It isn't fair, it isn't right, indeed. 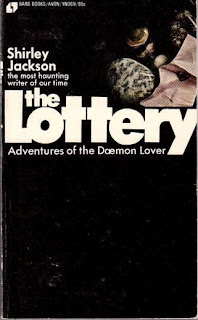 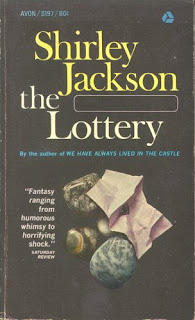 I was thinking about the "The Lottery" because earlier this week I read Jackson's story "The Daemon Lover" (found in the utterly lovely two-volume set American Fantastic Tales from The Library of America, which I received for my recent birthday) which apparently is the subtitle of these collections. Editor Peter Straub was wise to choose this one over the ubiquitous "Lottery." Jackson's hapless bride-to-be (at age 34 no less!) slowly realizes her fiance is, on the morning of their wedding, nowhere to be found. Detail by detail Jackson ratchets up suspense as she combs the nearby city streets asking if anyone has seen a rather tall, fair man in a blue suit, possibly carrying flowers... "Daemon Lover" was published originally in Woman's Home Companion in 1949. The anxiety of a marriage that may never come - surely one for many of that periodical's audience - is unpleasantly literalized. I do wonder what the reaction to that story was! 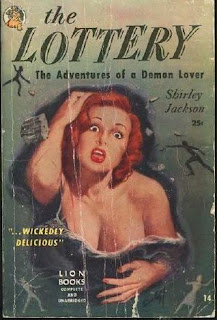 How about this poor disheveled young woman? Obviously the cover was part of that long-ago era when publishers tried sexing up the paperback art for authors like Hemingway, Faulkner, and Orwell to pique the interest of the American philistine and get him to shell out two bits. As for other Jackson works, I really dig the logo of Jackson's name and the imagery, thanks to artist William Teason, on these 1970s paperback reprints from Popular Library; my collection boasts a few Jackson titles, all of which I've loved, but you really need to check out the unmissable Shirley Jackson Book Cover Project for the rest. 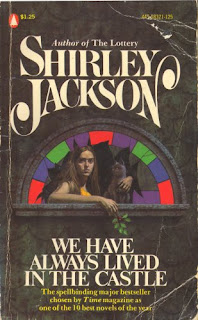 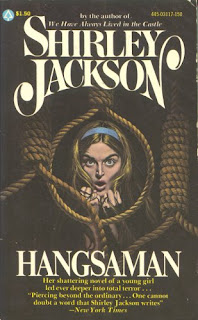 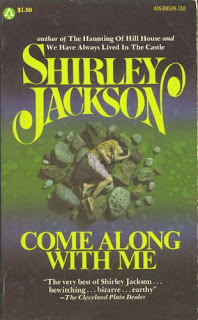 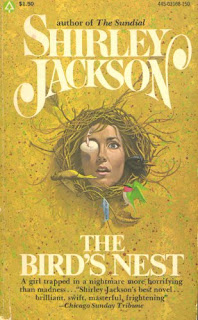 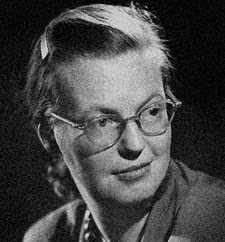 On a personal note, I'm heading off on vacation to Los Angeles on Monday for 7 or 8 days, so this will probably be my last post till I get back. However I've scoped out the used bookstores and plan on coming home with plenty of vintage horror paperbacks for the new year!
Posted by Will Errickson at 5:54 AM

Some great covers there, Will. As much as I love The Lottery, my favorite Shirley Jackson tale has got to be The Beautiful Stranger, because it's so damn disorienting. It's literary LSD.

Wonderful covers! She is a wonderful author. My favorite book of hers is The Haunting of Hillhouse. I don't think there has ever been another haunting story told that has touched it.

i had to read The Lottery in class when i was about 13. traumatized me for YEARS. something about the randomenss...

Nice job. I just found a copy of the first edition you picture for ten cents!

I was the model for several of these covers. My next door neighbor William Teason was the artist. He would take black and white photos with props and work from those.