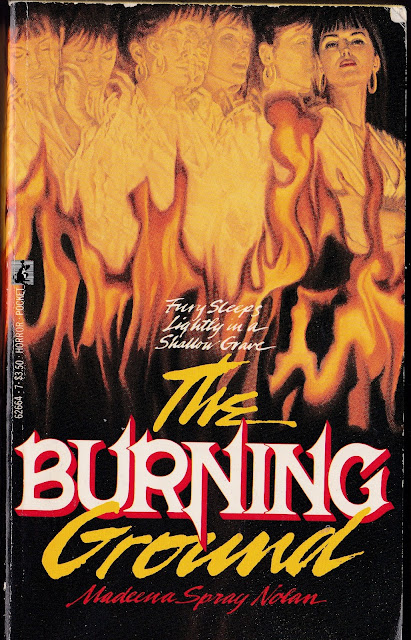 Some capsule reviews of three horror novels I read early this year; none exactly essential, alas, but the first title is recommended.

With its flame-swept cover of a mysterious beauty transforming into another mysterious beauty, you might think I would've skipped this book when I found it at Powell's last year. You'd be wrong! Shouldn't surprise you now that I picked it up solely because of its cover art and also because I'd never ever heard of it before. Then, lo and behold, I was rewarded with several hours of creepy, darkly romantic, even refreshing reading. Yes: The Burning Ground (Pocket Books, July 1987, cover by Peter Caras) more than met expectation. Author Madeena Spray Nolan, whoever that is, writes in a smart, modern, lively style that belies Gothic romance origins. 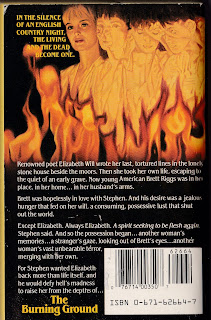 Odd to feel so sad at the death of someone I had never known. Back cover synopsis a fair inkling of what to expect inside, while Nolan elevates material somewhat by her knowing skills and insights into hidden human motivation; dialogue comes from having listened to others, not from imagination. Entertaining read with elements of (mild) horror, occult, mystery, contemporary romance (couple overheated sex scenes work, maybe a laugh), and Gothic fiction. Some grim poetic imagery works well. At base is desire to live a creative life, and the stranglehold grip it can have on people whether they want it or not—and worse, whether they have talent or not. 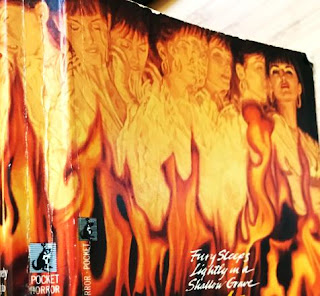 Nolan's skill with suspense and the supernatural is laudable; the climax taut; the denouement satisfying. I could find little about Nolan online, other than that she wrote a children's book and another horror novel. But note how thoughtfully Pocket Books moved their logo to accommodate Caras's illustration! 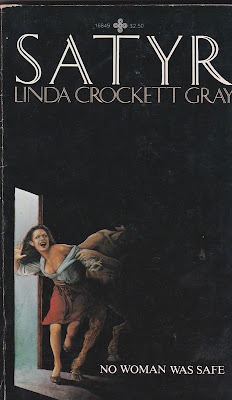 Featuring a sexually reductive cover—from Playboy Paperbacks, natch—Satyr by Linda Crockett Gray (July 1981) is about as subtle. Imad Gurdev is a real-life satyr, escaping from his kind's historic monastic abode in the wilds of Turkey to the sleazy grindhouse streets of Tampa, FL, to get his rocks off and blaspheme. He hides his goat-legs in baggy clothes and plays mind-tricks on his female victims so they have only vague memories of the rape. Anti-rape crusader Martha Boozer speaks to high schools and women's groups—at one point she blithely shows the latter a slide show not just of questionable ancient art but also "kiddie porn" and then a snuff film "confiscated by Tampa police." Talk about triggering. 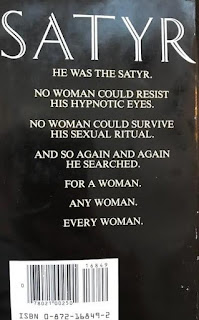 Operating almost as a feminist manifesto in the Dworkin/MacKinnon/Brownmiller mold but also offering up stalking scenarios like a slasher film, Satyr features some moments of suspense as the two characters hurtle towards confrontation, and the obligatory research visit to an anthro prof who declares "These mixed-breed creatures where the human and beast are combined have existed in every culture I have studied." Well fuckin' duh. Fortunately the other older satyrs aren't such creepos and follow the apostate to America's wang to punish and destroy him. Though not terribly written or paced—I mean, it's published by Playboy, not Zebra—I have no reason to recommend the novel. 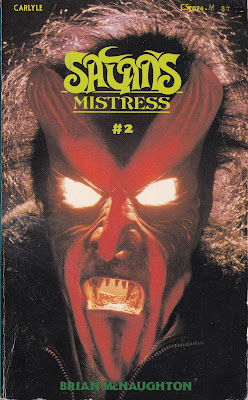 The late Brian McNaughton is also a writer of some real ability, but it's wasted mostly on nonsense in Satan's Mistress (Carlyle Books, 1982 reprint of 1978 original), number two in a Satanic/occult series that is fairly infamous for its UK cover art (this American edition looks like adult bookstore fodder). Family of three, father, mother (with a witchy history), and son, moves into an upstate New York mill, we learn mother's own father raped her as he was leader of a religious cult and had declared himself God. Slooowly weird stuff starts to happen, dreams of hot redheaded chicks, mom and son have some sexual tension (ugh) and whatnot. There's a secret room in the basement, somebody left a lot of books down here, oh look it's the Necronomicon! Let's go ask the old lawyer nearby who also happens to be a pulp horror aficionado and Lovecraft expert all about it: "I had it this afternoon from a thoroughly reliable source that, when 'The Call of Cthulhu' was first printed in 1928, Albert Einstein panicked. He had drafted a letter urging Farnsworth Wright, Lovecraft's editor, in the strongest possible terms, not to print any more stories on similar themes..." 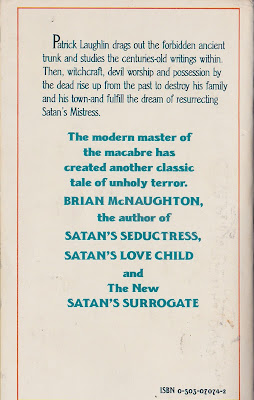 I did enjoy the Halloween party sequence—writing good party scenes is hard, all those characters mingling and drinking and flirting all at once, and I enjoy a good one whether in real life or on the page. Still, I don't understand how an ostensible horror writer can spend so much time writing about nothing and so little time on, you know, horror. Isn't it more fun to write of horrific events and encounters than of a neighbor's pack of dogs or a teenage boy's crush or the New York commercial art world? Grady Hendrix told me the book works better if you read it along with the other in the series. Again, I liked McNaughton's bright, adept approach, he knows people and life (not all horror writers do, one of my constant criticisms), and the climax gets Yog-Sothothy, but I'm not rushing to read the others. Although Mistress does contain my favorite line of the year so far: He went and changed to his work clothes, a pair of jeans that the Ramones would have discarded. Gabba gabba hey, that's hilarious.

I highly recommend _The Throne of Bones_ by Brian McNaughton. It's much better than the rest of his work.

Good to know. Fortunately I already own it!

I have Satyr as a collector. Will not read it though.

https://www.thesunmagazine.org/contributors/madeena-spray-nolan That might actually be her name. Newer short story (2007) at link.