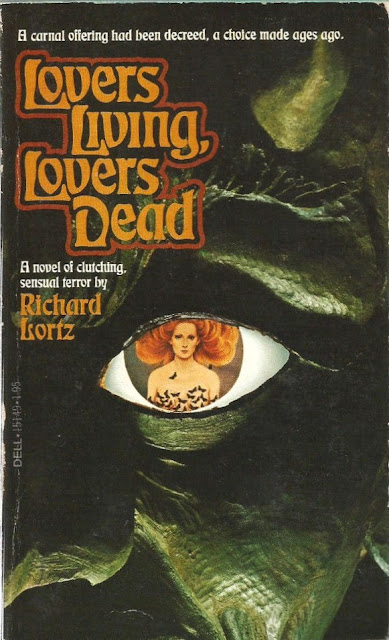 How I love when my low expectations are shattered by a horror novel. Nothing like that feeling of giddiness when a nondescript book rises above the slag heap of cliche and convention to offer surprising, even—especially?—perverse, bizarre chills and thrills. Published in hardcover in 1977, Lovers Living, Lovers Dead (Dell paperback, June 1979), by playwright/TV writer/novelist Richard Lortz, is a dated humdinger of a horror novel, replete with cringe-worthy sexual politics that seem positively Neanderthal today. However it still manages to fascinate with an ethereal female protagonist, her murky psychological depths, and the analytic attempts to plumb them. And oh, her put-upon husband! Won't someone please think of him? It's a good thing it's the '70s because he can talk freely with his wife's psychiatrist to get to the bottom of her mysterious ways. 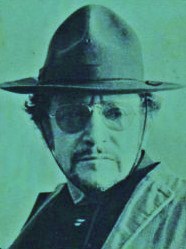 Our protagonist, Michael Kouris, is a hale-and-hearty comparative lit professor of late middle-age, an egotistical, masculine manly-man, married for seven years to the much younger Christine, who earlier had been one of his English students (more on that later). With their two children, little weirods Jamie and Rose, they've just moved into a many-roomed ramshackle home in a New England forest. But something's not right: in the unsettling scene which opens the novel, Christine displays a violent streak by shooting up a nest of starlings in one of the huge trees on their new property. Also: the children are unruly and worst of all, the Kourises have been celibate for almost the entirety of their marriage! This simply won't do.

All this conflict stems, Michael is certain, from Christine's vagabond childhood, thanks to her father, Marcus Damenian, a brilliant eccentric anthropologist who took her on his many adventures deep into the exotic, dangerous jungles of far, far away, where they lived with primitive tribal peoples. Father's been dead for years now but his memory lives on, up in the couple's attic, in a trunk belonging to Christine which she keeps forever locked... 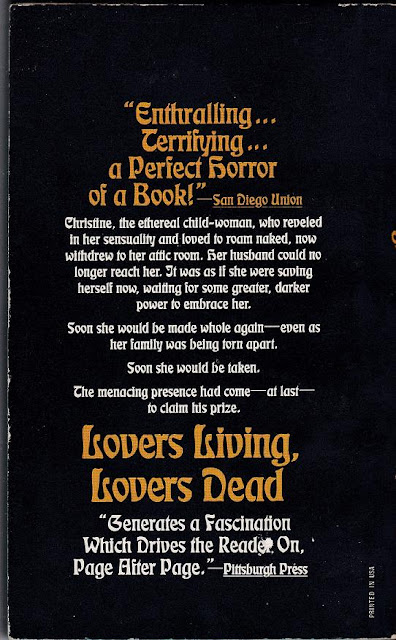 Poor unfathomable Christine is depicted as a woman-child who charms everyone she meets, especially Michael's dowdy old academic colleagues and their wives ("Where is that delightful creature? I simply must see her!") and who plays pretend, acts theatrically, as if she's playing a joke on everyone. But Michael must have her, Lortz tell us, and marries her after knowing her four days, the man must possess his bride, he will not be denied this elusive creature! The May-December romance seems so, so incredibly dated today, as does the domestic abuse portrayed as a lovers' game of passion and teasing ("Go on, hit me!") but with no clear line of consent (the old adage "better to ask for forgiveness than permission" seems to be employed). Even the cops are called, and one of them smiles "knowingly" as he leaves. It's a bit of a groaner.

Other dated groaners: that sexual relationships between older professors and their students as a given; the comparison of a wife to a child as a compliment; Michael and Christine's therapist talk together about Christine's sessions; drawing a link, perhaps tenuous, between the idea of feral children and autistic children. Christine also functions as a proto manic pixie dream girl, which in its day was not nearly as noted as it is now: the young woman's lack of convention and self-consciousness, her quirkiness and spontaneity, her almost-literally animalistic nature, are a balm to grown-up uptight Michael, helping him get in touch with a less rigid masculine persona.

But her intermittent fugue states and hallucinations (of a chauffeur no less!) lead to regression therapy with MDMA, administered by a psychiatrist, Dr. Ellen Ellenbogen (yes that's right), which becomes an entertaining mishmash of Freud and Jung as Christine mentally travels back to her unusual, to say the least, upbringing. Michael eventually allows the doctor access to his psyche as well, but it's all about getting Christine to explain the source her paternal obsession... and why can't this wife lay her husband once in awhile?! 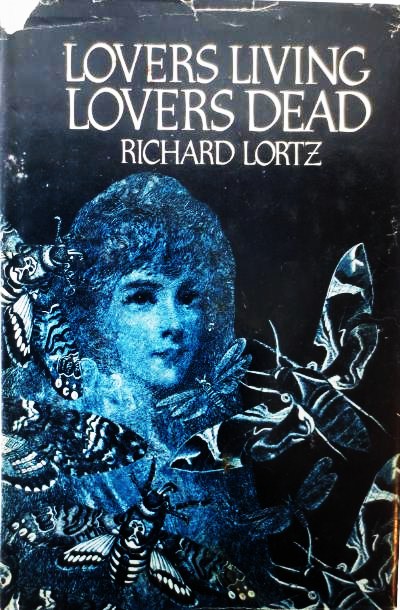 Lortz's style might take some getting used to; the first few pages are shaky, while the opening chapter is a grotesque scene of obscure motivation in Christine's violence against starlings. The fussy, digressive manner can cause the reader to get lost in a tangle of brief asides, rife with sensual imagery which evokes classical Romantic poetry, high-minded yet earthy, somewhat pretentious yet not off-putting (for this reader anyway). Epigrams courtesy of iconic 19th-century teenage rebel-poet Rimbaud, perhaps a nod to Christine's wild, untamed manner: He entertained himself with the torture of rare aimals. He set palaces flame. He rushed into crowds and slaughtered all who were near him. Yet throngs, gilded roofs, beautiful animals remained.

Overall however Lortz seems to be having a weird sort of fun with his outrageous (and truly shocking, even offensive to many probably) conceit, threading the narrative with unconventional sexual mores, anthropological, mythological, and psychological musings, all delivered in an allusive prose that maintains an intellectual distance from the perverse proceedings.

Conversion is an unconscious incubation (of knowledge forgotten or slowly acquired and synthesized) that enters consciousness with something like a burst.
So with Christine: not conversion exactly, but what she had previously understood to be être vu: a flooding up of subliminal knowledge whose sum is more than its parts... left her chilled from spinal column to surface skin... 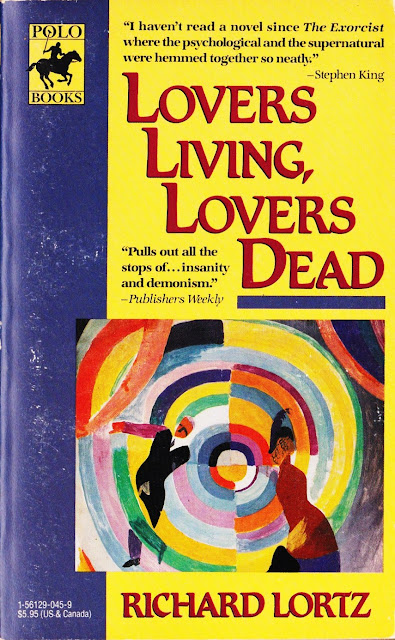 My review is only scratching the surface of the book's transgressive qualities. Despite being only nominally a horror novel—it's creepy and weird, there are some suspenseful chills, a few violent acts, and the shock of that ultimate discovery—I pretty much loved every minute of Lovers Living, Lovers Dead (now that I think about it, it was the hauntingly romantic title that originally piqued my interest). I dug how Lortz totally pulls off his nutso surprise, it's pure delight for thrill seekers like me. Like two other TMHF '70s favorites, Incubus and Gwen, In Green, Lortz's work is a pure product of its era. An uncomfortable echo of our sexual past, warts and all, highlighting scenarios we'd never countenance today, I can recommend this novel to those readers who enjoy such inappropriate dalliances. Cock an eyebrow at the shenanigans delivered with a straight face, laugh ironically from the comfortable vantage point of 40 years' distance, and wait to be amazed at what Michael eventually finds in Christine's locked box.

With a croak of loathing, he dropped it back into the trunk and slammed the lid, collapsing over it, his head and stomach pounding in waves of vertigo and nausea. 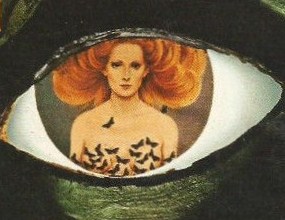 Excellent review. I was actually surprised to find that you hadn't reviewed this already, as I recall that we both happened to be reading this at around the same time a couple years back (according to your Facebook or Goodreads page I think).

I recently started Lortz's SUMMER IN SPAIN, but it was pretty much a straight literary novel, very "talky" and filled with snooty rich folk. I need to get back to it as I hear it gets pretty crazy/surreal later on. His CHILDREN OF THE NIGHT seems more in my wheelhouse.

I have CHILDREN OF THE NIGHT as well but haven’t read it, just opening chapter, seemed so-so.

This review took a looong time to get right bc I didn’t want to get spoiler-y and yet needed to pique reader interest. It was a tricky one to write bc of subject matter so I’ve been sitting on it for ages! Glad you enjoyed it.

I went on a Lortz kick around a year ago. Liked this book a lot, and also Dracula's Children (aka Children of the Night). He's a weird writer... but, weird is good!

Thank you, thank you Will for revealing the mystery novel I have been searching my brain for for like-forever. I first read the hardback a couple years after it came out when I found a remaindered copy in a big bookstore. Remember those? I was bowled over by the story and writing here-but couldn't search for it many years later because I couldn't think of author or title. All I remembered was the blue cover illustration with the moths. I lost or lent my copy out, but now mean to find a copy and read the hell out of it again! I knew that you'd come through for me with this title sooner or later!
Thanks again!
Ray

Wow WHATTA REVIEW!!! It piqued my interest so I got the book from my library, and while I've only read the first two chapters, it really is a humdinger! So baroque, so weird! It has the same flavor as Victorian erotica, I think.

I've only recently discovered your blog, and it has been a real treat. Carry on!