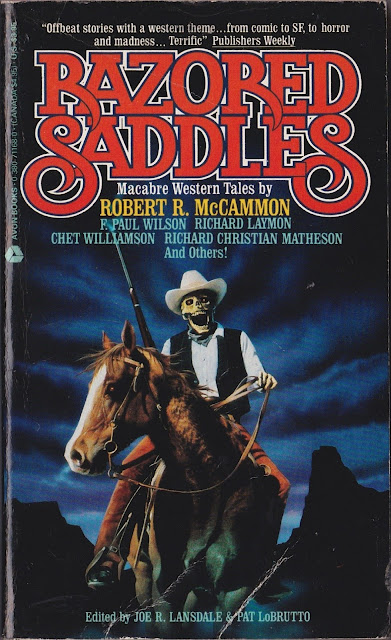 Boasting cover art that strikes a sweet spot between absurd and awesome, the wonderfully-titled Razored Saddles (Avon Books paperback, October 1990) rustles up a heap of horror/SF/western/whatever short fiction to boot. Edited by the always-welcome Texan Joe R. Lansdale and co-conspirator Pat LoBrutto, the anthology collects a hatful of recognizable genre names of the day, plus a few new to almost anybody. I remember this tome way back when thanks to that cover (thanks to Lee MacCleod) and its regrettable joke categorization on the spine, "cowpunk." But Western-themed anything had always been low in my interest level, and it pains me to say that my holiday reading of Razored Saddles reminded me why. 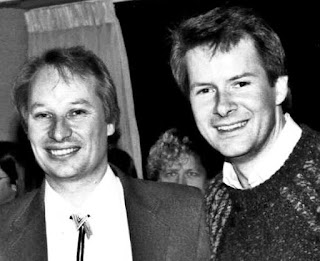 Another of Robert McCammon's pleasant, inoffensive horror tales, "Black Boots," begins the anthology. A cowboy is being followed across the desert by a gunslinger wearing the titular objects. He stops in a dusty small "town" to drink some watered-down whiskey but soon sees "Black Boots" at the door of the saloon. Ironic tragedy follows. Its touches of surrealism are well-noted, but McCammon's simplistic style neuters the creepiness and final twist.

"Thirteen Days of Glory" by Scott A. Cupp upends a famous Western showdown with a decidedly transgressive aspect. Freedom must be for everyone or for none at all. Not bad, rather daring, probably offensive to some and liberating for others. Cupp's story is engaging and yet sad, one of the few here that are memorable.

"Gold" by Lewis Shiner is strong, well-told, tinged by magic-realism (a style much favored by genre writerly-writers), set in Creole swamps with strong characterization, but it ends with a damp whimper as it goes into mind-numbing financial details. A huge letdown. 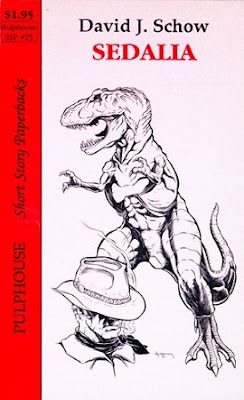 David J. Schow's "Sedalia" is just... weird. Not fun weird, not weird weird, but just kinda what? weird, a proto-bizarro tale of ghost dinosaurs, maybe some kind of fossil fuel metaphor. Taking its title from the old-as-dinosaurs TV show "Rawhide," we've got "drovers" herding those ghost dinos in some future Los Angeles. It's marred by juvenile talk of dinosaur poop and incomprehensible politics, although I appreciated the fact that characters refuse to call a brontosaurus an apatosaurus as it "seemed too-too." 2015 showed that was correct.

Introduced by the editors as a bit of "Weird Tales" or EC Comics, Ardath Mayhar's "Trapline" is precisely that: a fur-trapper and a gory comeuppance. Sure, why not, whatever. The late Melissa Mia Hall, whose short fiction I've enjoyed in the past, contributes "Stampede," about a single mom and her obnoxious brood and her attempts to raise them right. Realism to spare, sure, but wow those kids suck. 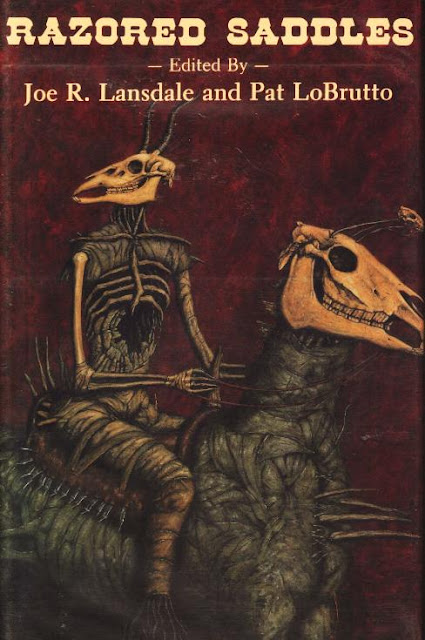 Two of my least favorite '80s horror writers, F. Paul Wilson and Richard Laymon, join the rodeo but get bucked off. Respectively, "The Tenth Toe" and "Dinker's Pond" aren't as bad as some works I've read by these guys, but they're both flat and immature, corny and obvious. Several names were new to me, even for a almost-30-year-old anthology: Lenore Carroll, whose "Eldon's Penitente," with its theme of pain, suffering, loss, and guilt, is rather memorable; and Robert Petitt, who swipes Lansdale's title and uses it all-too-literally in an SF tale.

Science fiction features in Al Sarrantonio's "Trail of the Chromium Bandits" and Gary Raisor's "Empty Places." Neither did anything for me, although the latter's mawkishness struck me as particularly lame and derivative of both Lansdale and Ray Bradbury. Neal Barrett Jr's tale of a Native criminal "Tony Red Dog" reads like Elmore Leonard-lite when it is readable at all, which it isn't mostly thanks to a constant barrage of character first and last names. Howard Waldrop's metafictional academic treatise on Western movies, "The Passing of the Western," strains even the most patient reader with its faux film history. God it was a grind getting through these stories. 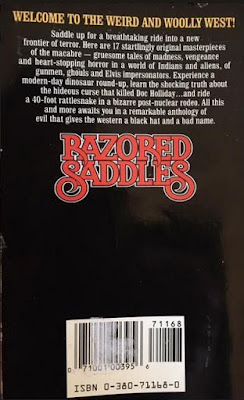 The final three tales offer some surprises. Lansdale's own story, "The Job," is a mean little bugger with a nasty twist, a pre-Tarantino riff about two articulate killers and their unexpected target. I hope you like racist slurs, though. Richard Christian Matheson offers "I'm Always Here," with his usual pared-down prose, utilized here to solid effect in a story about a dying country singer in the Hank Williams mold finds a new lease on life. It's way better than most of the stories in Matheson's Scars. And for the finale, there's Chet Williamson and his too-cutely titled "'Yore Skin's Jes's So Soft 'n Purty...'" Man, there's a horrific climax waiting for you here.

That "cowpunk" novelty can't sustain an entire anthology, and the few tales here that I kind of enjoyed aren't essential reads by any means. I know every author has more and better work elsewhere; head out on the trail searching for those doggies, and let Razored Saddles fade into the sunset.

Posted by Will Errickson at 9:43 AM

What about Lansdale's introduction though? Might be one of my favorite pieces of writing, period.

True it's pretty cool, Lansdale's always entertaining. One could read that and be done with the book itself.

I have the Dark Harvest edition of this collection that was signed by the authors. I came across it at a bookseller that's now out of business. I haven't read all of the stories in it yet, even though I've had it for a long time.

I'll take the dissenting opinion and suggest this is actually a very entertaining and rewarding anthology -- as most of Dark Harvest's anthologies were back in the day (this pb was a reprint of the DH hardcover). Granted, though, it's been a long time since I've read it and it was my first exposure to the weird western, a hybrid I still enjoy...so my objectivity could be tainted by rose-colored glasses. I do remember Williamson's "Yore Skin's Jes's So Soft 'n Purty" as being a particular favorite.

I remember quite enjoying Schow's "Sedalia," but I don't remember if I ever finished the anthology. I also echo MikeGibbonz's point; any essay or intro by Lansdale is fun reading, far as I'm concerned.

The mere title has me cringing and squeezing my thighs together. Brings to mind the old horrific challenge to imagine sliding down a banister that gradually turns into a razor blade. Oooo...feeling verklempt...