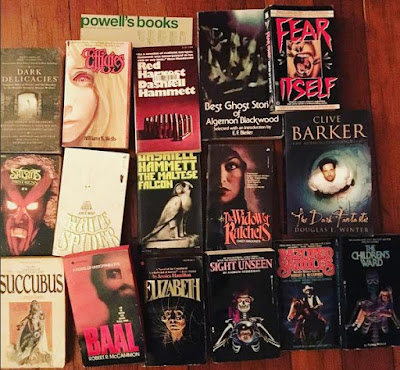 Spent Friday afternoon kinda hungover after a late night of birthday dinner and drinks on Thursday. But I wouldn't let that deter me from shopping at Powell's House of Books, here in Portland. One of America's premier bookstores, I visit maybe three or four times a year. Their horror section is a mix of new and used titles (all of their stock is, actually) and while their pricing reflects a knowledge of the collector (Charles Beaumont's 1960s paperbacks going for $15; a first-edition paperback of I Am Legend for $35), you can often find great deals mixed in. In fact, they had a whole spinner rack of 1980s horror paperbacks for fans of Netflix's "Stranger Things" series, priced around $2 - $3 each. 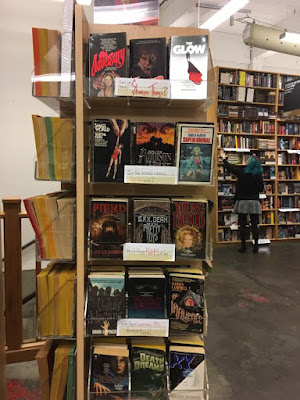 First read is that Barker bio from 2001 by the great Douglas E. Winter; I'm enjoying all the behind-the-scenes stuff about deals with his first publishers and editors. Not sure what's next; I've got some other writing projects I'm working on and am halfway through a not-so-great 1970s horror title that I'll probably review before the end of the year. Anyway, any visitor to Portland needs to stop in at Powell's and give themselves plenty of time to explore their delirious maze of seemingly endless shelves... hope you make it out alive! 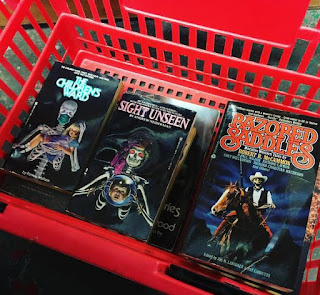 Posted by Will Errickson at 9:03 PM

Nice score. I see you're like me, re-buying books you already have (I do it when I find a copy in better condition, or one with a cooler cover). It's a sickness.

I love Powell's. I'm down in Portland a few times a year, and always try to make it there (and am usually successful)...spending three or four hours in that place of book-shopping Nirvana is wonderful.

I do miss the ol' days of finding great, cheap deals right and left, but that was before they went on-line and started being more discriminating about collectibility and pricing. As you said, you can still find a bargain now and then, but most books are now priced accordingly. It's still book-buying Nirvana, though, even if my red Powell's basket is less full than it used to be...