Like a Pigeon from Hell: The Horror Stories of Robert E. Howard

This week saw the 108th anniversary of the birth of the pulp king of sword and sorcery  and the creator of Conan the Barbarian, Robert E. Howard. You probably already know this, but along with Lovecraft and Clark Ashton Smith, he was a titan of the pulp era and his books have long been available in countless and now collectible paperback editions. Time was kind to the art of a man who committed suicide when he was 30 years old, unable to face a future without his beloved mother, who lie comatose and near death when he put a pistol to his temple and pulled the trigger. 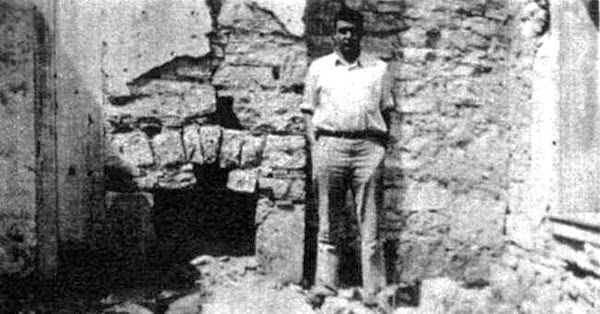 When it comes to Howard's fiction, I have been mostly unfamiliar with it, preferring the horror/dark fantasy tales from HPL and CAS. But these two paperbacks - Cthulhu: The Mythos and Kindred Horrors (Baen Books, May 1987, cover by Steve Hickman) and Pigeons from Hell and Other Weird and Fantastic Adventures (Zebra Books, June 1976, cover by Jeffrey Catherine Jones) - feature mostly Howard's own brand of HPL-tinged horror/sword-and-sorcery/dark fantasy tales, all published in Weird Tales throughout the 1930s. You probably already knew this too, but there is some fantastic stuff here.

Sadly, both covers feature misleading - albeit spectacular! - imagery: neither Cthulhu nor dinosaurs truly appear in the stories. But they are threaded with the fictional forbidden tomes, esoteric knowledge, and dark gods that are familiar to readers of horror, but they are also purely Howard's own: the heroes here aren't pasty scholars and recluses, but men of muscle, bone, and sinew - which he won't often let you forget - while locales are often misty craggy lands from a deep and forgotten ancient age rather than the wilds of Arkham or the historic university environs of Providence. Howard even goes for the one-up on HPL when a character from "Pigeons from Hell" states, "Witchcraft always meant the old towns of New England, to me - but all this is more terrible." Zing! I kinda skimmed through stories that contained vast passages about pure races, tribal honor, bravery, vengeance, that sort of thing (sword and sorcery - not my sort of thing), even when mixed with vague Lovecraftian darkness. Still, Howard's tales of grue work well and work often, and a few - "Pigeons from Hell," of course, "The Black Stone," "The Fires of Asshurbanipal" - I consider classics of their era. The famous and intriguingly titled "Pigeons from Hell" is a virtually perfect example of pulp horror. From its haunted house opening to its voodoo revenge turn all the way to its lurid, heart-palpitating climax, Howard never falters in his ability to propel a story forward (modern readers could probably do without the consistent use of the N-word, period-appropriate as it may be). I've read this tale a few times over the decades, read one comic book version, and recently saw its very well-done adaptation on the old "Thriller" show. Listen:

"A zuvembie is no longer human. It knows neither relatives nor friends. It is one with the people of the Black World. It commands the natural demons - owls, bats, snakes and werewolves, and can fetch darkness to blot out light... It dwells like a bat in a cave or a house... It can hypnotize the living by the sound of its voice, and when it slays a man, it can command his lifeless body until the flesh is cold. As long the blood flows, the corpse is its slave. Its pleasure lies in the slaughter of human beings." 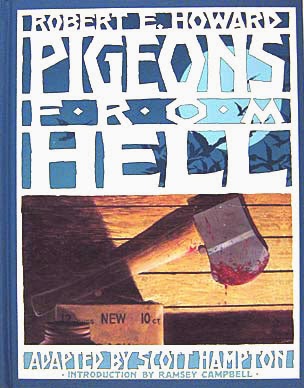 It works like gangbusters, and if you haven't read "Pigeons," step away from your computer or smartphone or whatever and get to it! "The Black Stone" showcases Howard's main contribution to the Cthulhu mythos, the Unaussprechlichen Kulten, or Nameless Cults, by Friedrich Wilhelm von Junzt, an adventurer-scholar who of course discovers something he shouldn't have and is murdered - only after he finishes his book. This is the most overtly Lovecraftian story, with its academic narrator finally learning the horrors hinted at in a forbidden book are - gasp! - all too real. Howard whips himself into a frenzy of outlandish pulp prose  when he sets out to describe those "nameless rites" our old pal HPL was too squeamish to depict forthrightly. In a brooding forest beneath the moonlight, the narrator has found the titular object, but watches from afar:

...the worshipers, howling and foaming at the mouths, turned on each other with tooth and nail, rendering one another's garments and flesh in a blind passion of bestiality. The priest swept up an infant with a long arm, and shouting again that Name, whirled the wailing babe high in the air and dashed its brains out against the monolith, leaving a ghastly stain on the black surface. Cold with horror I saw him rip the tiny body open... 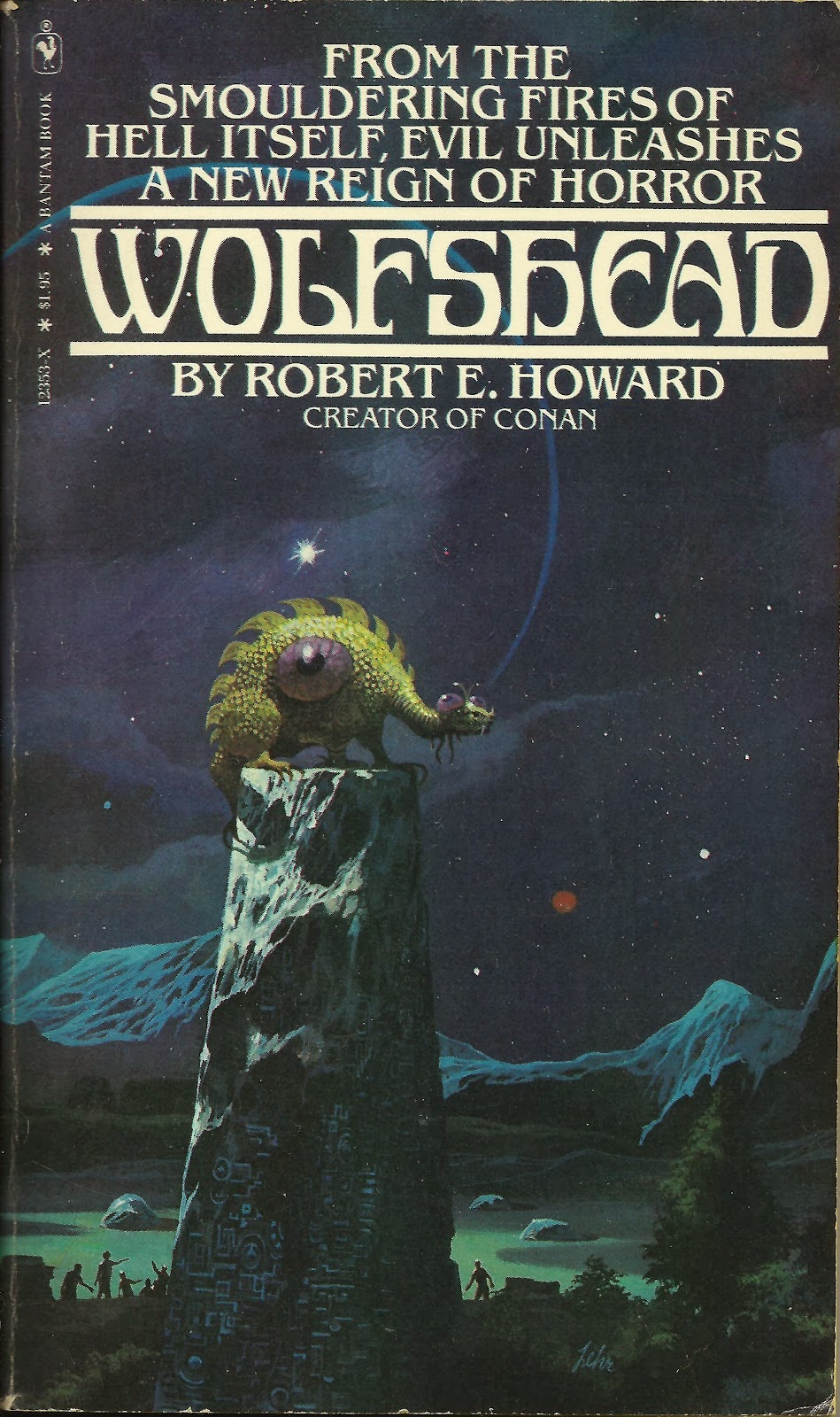 I mean what! So, so good, really. The Ballantine paperback cover above captures the mood perfectly. "The Fire of Asshurbanipal" was also excellent, successfully mixing men's adventure in the exotic land of Arabia with mind-blasting cosmic horror. The back-story from Howard, about a green jewel, an ancient desert land of black stone, and a vengeful sorcerer, reads a bit like "The Shadow out of Time," and the two protagonists' entrance to this lost, deserted city evokes At the Mountains of Madness.They're looking for that fabled jewel, but they've been followed across the burning desert sands:

The shrieks had faded into a more horrific silence. Holding their breath, they heard suddenly a sound that froze the blood in their veins - the soft sliding of metal or stone in a groove. At the same time the hidden door began to open, and Steve caught a glimmer in the blackness that might have been the glitter of monstrous eyes. He closed his own; he dared not look upon whatever horror slunk from the hideous black well. He knew that there are strains the human brain cannot stand, and every primitive instinct in his soul cried out to him this thing was nightmare and lunacy. 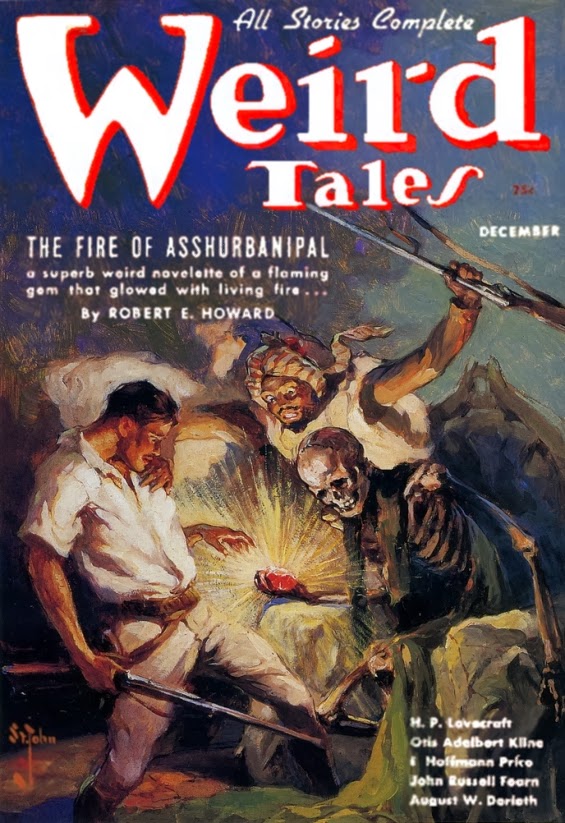 Well, duh. Howard had a long obsession with obscure history, languages, and peoples, and enriched his pulp writing with it; "The People of the Dark," "The Children of the Night," "The Garden Fear," and "The Valley of the Worm" are the best examples of this proclivity. While not necessarily to my taste, I can see how young Weird Tales readers found their minds stimulated and expanded on such fare - which made Howard the success he was, and why he's still read today. Other tales like "Old Garfield's Heart," "The Thing on the Roof," and "Dig Me No Grave," are pure enjoyable gruesomeness with twist endings but retain a charm and readability for all that. Robert E. Howard's muscular prose, vivid action scenes, moody horrors, and ability to conjure in writing precisely what he imagined, can hijack your mind to a place in a past in which men are made of iron, honor is king, pigeons are from hell and dark and hungry gods demand nothing less than our very blood.

Posted by Will Errickson at 7:29 AM

Really cool article. I've always loved Howard's horror fiction and I remember discovering that one with the Jeff Jones cover back in the 70's at a bookstore (it still holds a treasured place on my bookshelf). Scott Hampton once at a con did a beautiful painting of a zuvembie for me that I have hanging on my living room wall.

What a great article :-) i am reading Conan at the moment and did not realise it was the anniversary of the author. I read lovecraft for the first time last year and it was through my research on him i started finding out more about Howard. I am really enjoying Conan and like his stories on Solomon Kane. A lot of his stories enfuse horror, even Conan, with action and fantasy. I will certainly seek out his other works after i finish my current collection. Howards stories while not with out its faults are extremely fun and pulse ahead with a special magic, which make it extra special compared to other pulp fiction.

This book was my first introduction to the writings of Robert E. Howard. I had known of Conan through the Arnie movies, and I found this anthology in the Horror section at a now closed Borders Books and Music in the mid-90's. It was around this time I discovered that Howard was a contemporary of HP Lovecraft, and a few of the stories definitely have that influence, even the Conan stories. Though it's not for everyone, I always found the "Sword and Sorcery" sub-genre more palatable then traditional Tolkien fantasy, as sword and sorcery has a LOT of horror elements.

Item of interest: The term "Zuvembie" was used by Marvel Comics in place of "Zombie" due to Comics Code restrictions.

If you really want to see what Howard can do to Lovecraft, read both of their contributions to the "Cosmos" round robin.
I understand what you mean by the "N-word". It's something which can be shocking to modern eyes, but appears all over the pulps.

I've read it persuasively argued by biographers of Howard that it wasn't that he was unable to face life without his mother, it was that seeing his mother's frail and aging body brought him to a profound realization that he would someday lose his strength and intellect to age. Rather than see himself fail slowly, he decided to leave the world when he was still in his prime so that he would always be remembered as a vital and strong person.