Charnel House by Graham Masterton (1978): His Breath, His Heart, His Blood 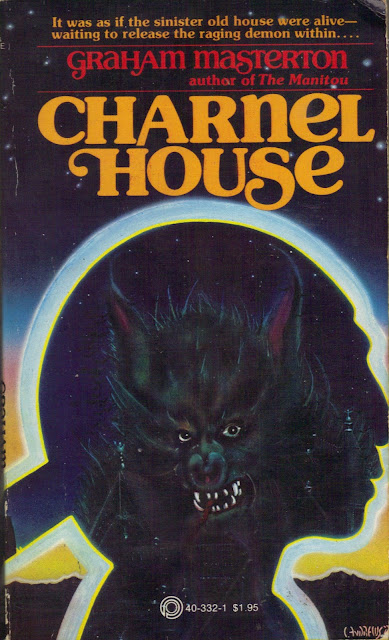 Another foray into Native American pulp horror from one of its most ardent purveyors, Graham Masterton! His fourth novel Charnel House delivers in the usual Masterton manner: regular guy first-person narration, ancient evil awoken, disbelieving authorities, wizened elder here to help, lady of various charms threatened by said ancient evil. This is pulp in its '70s incarnation, fast and cheap, but fun and almost charming in its steadfast refusal to stop and ponder, take a breath, or avoid engaging in dated gender and race stereotypes (well, they weren't dated then... but maybe). Nope, Masterton races through Charnel House in his patented hell-for-leather, first-draft style, no need for subtlety or an effort to suspend disbelief. 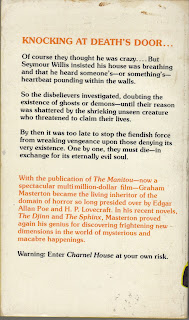 We start off with what seems to simply be a haunted house, on a sloping San Francisco side street, in a tall Gothic-styled home. The elderly owner, Seymour Willis, can hear it breathing, you see, and he's enlisted the aid of San Fran sanitation worker John Hyatt to find out if the breathing is, you know, normal. It's not, of course, so Hyatt calls up some colleagues and pals and an ex-hippie/occult/Age of Aquarius girlfriend to help piece together the mystery of a respirating house. This all ends badly, ends so badly that the artist for the cover of Tor's 1988 edition was able to choose one of those bad moments for illustrating. Accurately. I mean, woah.

As in Masterton's other mythology-themed novels (The Manitou, The Djinn), the protagonist (not much of a skeptic) looks to a wise old man versed in the supernatural charms and curses of mankind's childhood. George Thousand Names identifies the source of the haunting: a demon of peerless malignity known as The First One to Use Words for Force. He sounds pretty awesome to me, as Mr. Thousand Names describes him thus:


"He was wily and cunning and vicious, and his chief enjoyments were causing hatred and confusion, and satisfying his lust on women. The reason we call him the First One to Use Words for Force is because his tricks and his savagery created in the hearts of men their first feelings of fury and revenge... and when he was asked in ancient days to help place the stars, he tossed his own handful of stars up into the night sky at random and created the Milky Way." 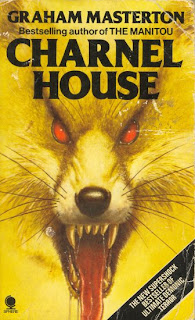 The First One, once banished to the underworld, hid away his vital parts - I said, appalled, "His breath, his heart, and his blood?" - so that he could one day return to life at full power. And that, you won't be surprised to learn, is precisely what's going on at "Charnel House:" he's putting himself back together and using the innocent as his vessels. I love that stuff, really I do, and Masterton doesn't stint on these kinds of macabre legends of torture and woe ("the Ordeal of the Three"!?). 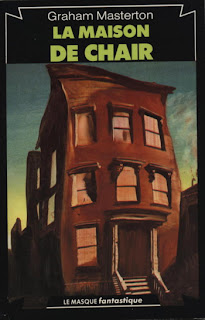 At first I thought the novel might be a crude ripoff of Matheson's Hell House, but it's not at all, just more of the Masterton same. Which is cool with me. Despite the one-dimensional storyline, generic characterization, the leaden humor, cliched attempts at atmosphere and mood, and American characters who speak only in British English while drinking copious amounts of booze, Masterton successfully piles horror upon horror, leading to an action-packed climax at - you guessed it - the Golden Gate Bridge. And I was just there myself, so I had no problem imagining the precise location. Good stuff. 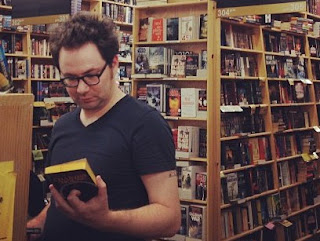 But perhaps the best part of Charnel House are its paperback covers! In fact, I bought the original Pinnacle edition at Powell's Books off a display labeled "Judge a Book By Its Cover!" See more covers here.

Very nice post and review. I have not yet read any of Masterton's work, but have a number of his novels on my TBR pile.

They are some great covers too. Thanks for sharing them.

I love Masterton. Crazy, creative, and usually featuring some twisted form of torture. He was splatterpunk before the term was coined.

He really knew how to crank it up to 11 that's for sure.

I know I liked it, but I can't remember either book well enough to say whether there's continuity between them so they could exist in the same universe, or they're mutually exclusive.

I love Masterton. I've read several of his books. I loved The Djinn and I'm currently reading Night Warriors.