The Godsend by Bernard Taylor (1976): She Killed Your Baby Today

The cover of this bestselling paperback boasts the whole gamut of '70s genre cliches, with a slightly menacing child glowering out at prospective book buyers, its vaguely religious-sounding title, and that inescapable triumvirate of previous successes, The Exorcist, The Other, and Rosemary's Baby. I'd read Bernard Taylor's effective ghostly love story Sweetheart, Sweetheart, so was looking forward to The Godsend, his debut novel. I've seen copies of this old Avon paperback (March 1977) for years and years during my bookstore searches, and got it for a buck recently. It is squarely in that early pre-King tradition of unassuming horror novels that go for the creeping chill, the subtle intimation, the growing unease, rather than the full-bore, two-fisted approach we'd see later with, say, The Shining. There's little of the pulp tradition in The Godsend, but that's not to say it doesn't like to boil the pot a little... 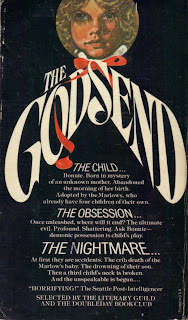 Lowering us gently into the cozy ease of family life in the English countryside, Taylor introduces us to the Marlowes: husband and father Alan - our narrator - his wife Kate, and their four young children as they laze a day away lakeside. And so it begins when they see a solitary young pregnant woman relaxing nearby. Kate strikes up a pleasant, mild conversation with her but describes the woman, named Jane, to Alan as funny, strange, odd, sad... stray. But Alan thinks little of it till several days later when, returning from his work as an illustrator, he arrives home and one of his toddler sons, Sam, tells him the lady, that lady, is inside. Driven by a politeness bred in the bone, neither Alan nor Kate can bear to ask Jane to leave, and she stays long into the evening (ah-ha! Crawlspace!). Just as she's finally about to leave... well, of course: Jane goes into labor. Alan runs off to rouse the village doctor from bed, but when they return, Jane is asleep in their spare room while Kate, smiling, holds the newborn babe in her arms. (Some spoilers ahead.) 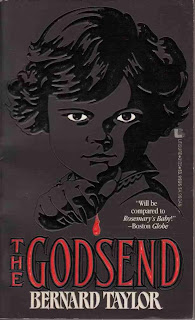 But Jane mysteriously disappears into the night leaving her baby behind. No trace of her is found (early '70s in a little British village, you know). Kate is besotted with the infant girl, and efforts begin to not just foster the newly-christened Bonnie, but to adopt her outright, adding even more joy, affection, and love to the Marlowe family life. And then... and then begins the creeping, almost unbelievable descent into the horror of murdered children. You knew that was coming, right? Because it does come, and it comes without surcease. And little Bonnie is always, always, nearby, and each death seems accidental. I inwardly moaned each time I realized Taylor was setting up a death scene for one of the children, because they come in the midst of sun-drenched afternoons in the family bosom.


I can still see Kate as she ran from the house that afternoon, her hair flying, coming at me like a wild woman, crazed, clutching at Sam's body as I held him... I can still see her as she sits there, rocking back and forth, supporting his head on his broken neck, her mouth opening and closing, emitting sounds like that of some mortally wounded animal, eyes staring in disbelief... What is miraculous is that a person can keep such memories and keep on living. 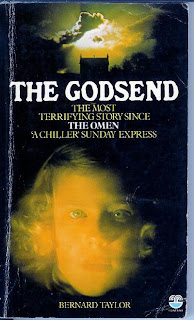 The years move on and the Marlowes rally, their grief and heartbreak over these "accidents" moving into the past. But it's only Alan who begins to suspect the angelic little Bonnie is anything but that; she is some sort of human cuckoo, a baby left in another's nest to purloin the affections from the biological Marlowe children by the most diabolical means. Alan and Kate's marriage begins to crumble beneath this unimaginable weight; Alan "kidnaps" Lucy away to safety, begging a distraught Kate to abandon her beloved Bonnie, that the child is responsible for the deaths of their own children. Kate simply, in that quiet British way, calls Alan mad. So now it's time for Alan to resort to other methods to save what's left of his family. 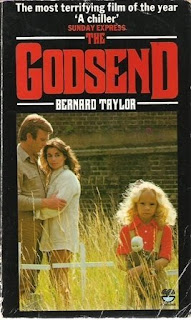 And here is where we hit the utter datedness of the novel: Taylor seems not to be much concerned with the legal complexities of adoption and child protective agencies. He touches on it some. There's one brief scene in which Alan tries to convince a social worker that he wants to basically get rid of Bonnie (by telling the woman Bonnie is evil!), and at another point he tells Kate that the police wouldn't want to be "dragged into" their little contretemps and that he's not breaking the law by taking their eldest child Lucy away to hide out. I mean - what? It felt like glib plotting that avoids real-life snares so as to generate suspense. But then again, maybe I'm thinking too much of how this scenario would play out in today's rabidly (over?)protective stance towards children. 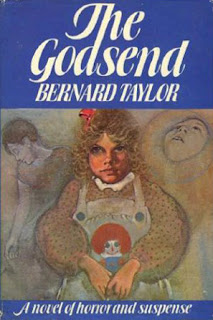 Nor does Taylor overburden the novel with anything in the way of an explanation for Bonnie; I was awaiting some supernatural reveal of appropriately evil proportions, but got nothing. Once Bonnie's real mother walks out of the Marlowes' home she is literally never seen or heard from again (compare this with the 1980 movie adaptation). Now this may have been Taylor trying to heighten the terror by making it inexplicable, but I found it, in a way, somewhat lazy. Still, The Godsend is a gripping if at times dispiriting read that sloooowly becomes horrific. It's certainly not the best of the creepy-kid books, but I don't think you'll be disappointed reading it; little Bonnie might not be Rosemary's baby, but you'll still dig her style.
Posted by Will Errickson at 9:00 AM

Hey just wanted to tell you that I love your blog, I also collect horror paperbacks. Anyway Happy Halloween.

Despite it flaws (well pointed out in this review) I *love* this book. In fact, I think I love almost everything I've read of Taylor's with the possible exception of The Kindness of Strangers, which is a little too staid and pedestrian (could have done with a small injection of Ramsey Campbellian oddness).
I've always thought that "Cuckoo" would have been a more appropriate title.

Tex, thank you! Enjoy the horror-day.

Doc, CUCKOO would have been more accurate; GODSEND however evokes all that '70s post-EXORCIST vibe.

THE GODSEND definitely a better book than film.

That blue cover is my favorite.

I think I remember reading somewhere that the book was originally intended to be called "The Cuckoo," but the title was changed to capitalize on the satanic horror craze that was still going strong.

That being said, there are no overt supernatural happenings in the book at all, other than any theories the reader might come up with to explain the origins of Bonnie and her biological mother. And there really isn't a need for a supernatural element. Nature is scary enough on its own, and the behavior of the cuckoo bird is already pretty horrifying even before you apply it to a human family.

"Nature is scary enough on its own..."

I don’t really get why the evil-children genre is such a ‘thing’ in horror fiction, but I decided to give this one a chance anyhow.

Although its slow start was frustrating, this really picked up momentum as it went along, and ended up being effectively thrilling, I thought.

Yeah, I too kept on wondering if the mother was going to reappear. Actually, I kind of liked that the author didn’t go for a supernatural explanation, but rather a nature analogy (which has already been mentioned by other posters).