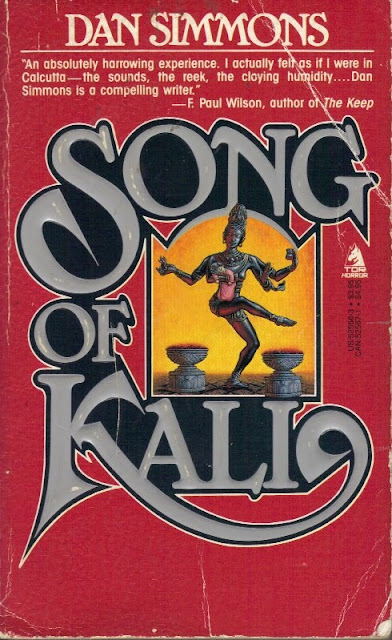 It was the mighty Harlan Ellison who first got lots of people talking about Dan Simmons back in the early 1980s. Duly impressed by one of his short stories (I believe it was "The River Styx Flows Upstream") at a writers' workshop, Ellison apparently dismissed everyone else in attendance - of course he did! - and the story ended up in (the now long-gone) Twilight Zone magazine and garnered more praise in the field. How do you follow that up? By winning the World Fantasy Award for a debut novel, Song of Kali, and beating out major genre writers Clive Barker and Anne Rice. Well damn! 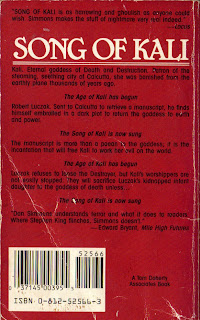 Song of Kali is a very personal horror favorite of mine, and has been ever since I tracked it down around 1989 or '90 and had to place a special order for it even then. Can't recall how I'd heard of it; probably some interview with Ellison somewhere. The glorious red textured paperback cover was like manna from heaven for me, while thanks go to Jill Bauman, for a cover illustration actually relates to the plot. For years I'd kept my original paperback (Tor, November 1986) in perfect condition, and I also bought this beat-up used copy so I could reread it - three times now! - and mark my favorite passages, for instance:

I think that there are black holes in reality. Black holes in the human spirit. And actual places where, because of density or misery or sheer human perversity, the fabric of things comes apart and that black core in us swallows all the rest. 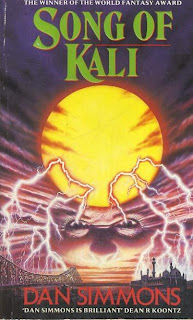 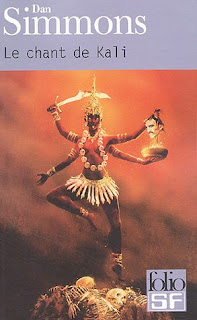 An aspiring American poet named Robert Luczak, his Indian wife Amrita, and their infant daughter trek to Calcutta so he can track down a lauded and mysterious old Indian poet, M. Das, whose unsettling new work has been making the rounds of the literary world - after his supposed death some years before. But the young American finds an exotic and dangerous world beyond his worst... oh, you know. You know. But Song of Kali also has something to say, as its dour anxieties address (inherent?) xenophobia, fear of women (manifested in the devouring goddess of Kali), the all-too-real fear of our children being harmed, as well as our unholy, unending passion and capacity for violence. 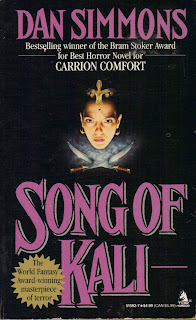 "All violence is power," this mysterious old M. Das will say. "Sometimes there is no hope. Sometimes there is only pain." And that, I don't need to tell you, is the crux of all great horror fiction, and Simmons doesn't hesitate in taking us far down that stinking, miasmic river to the heart of all darkness. He is a sure and unflinching guide. Luczak's knowledge of classic poetry, particularly Yeats, and Amrita's intelligence and instinct, infuse this novel with a moral weight most horror writers either fake or never bother with in the first place. 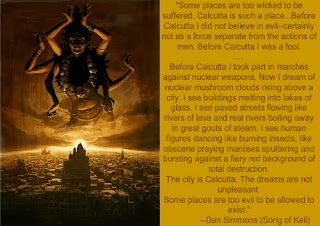 Simmons also does the nearly unbelievable job of bringing an unhallowed, nightmare version of Calcutta to life on the page - I believe he was in the city for only several days to do research - a dank dreadful atmosphere, swarming noxious crowds, shadowy cult secrets, and bloated, rotting corpses. It's so palpable, and strikingly unique in the annals of '80s horror fiction. And those with some knowledge of India's ancient religious myths will find the tale all the more disturbing. But in the end the only true evil, the only evil ever, is human and never divine. 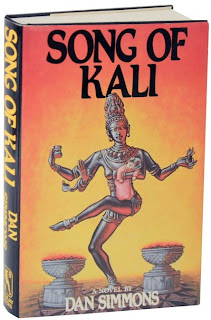 The song of Kali is now sung, the age of Kali has begun. Listen.

"The world is pain/O terrible wife of Siva/ You are chewing the flesh/Your tongue is drinking the blood, O dark Mother! O unclad Mother/O beloved of Siva/The world is pain." 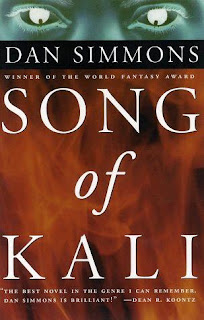 Oh. Hells. Yeah. And still in print. Pick it up. 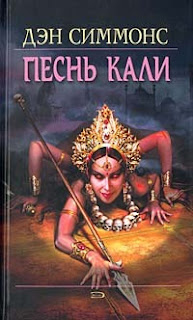 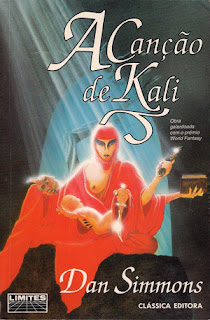 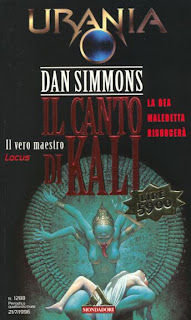 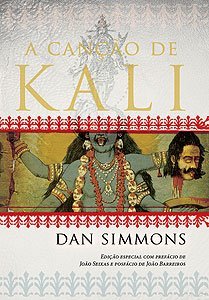 Posted by Will Errickson at 5:54 PM

I'm a huge Dan Simmons fan, and I still love this early work. The end is superb. Redemption? Hardly. This is the real stuff, folks.

I have his second novel, Carrion Comfort, but have yet to read it. It looks big and imposing, and other books keep shoving to the head of the line in my backlog of books to be read.

Lazlo, I began Carrion Comfort not too long after first reading Kali but got kinda bogged down in its immensity. I've heard mostly great things about it over the intervening years.

Ah a great novel (back when Simmons could write short books!) Summer Of Night is another favourite of mine, as well as his short stories in Prayers To Broken Stones.

I love "Kali" and "Carrion".
"Kali" has to be the most fucked up (in a good way)novel that I've ever read. That my daughter was only about 6 months old at the time that I read it sure didn't help things either! :-)

Nice post-loved this book, like most of Simmons' early horror. I hate to say it but I wish he never branched out. Once he started doing other tomes and mystery/sci-fi, he lost me, kind of like Straub did post 80s.

I loved Song of Kali. A great book. Kind’ve confused me at first because the lady who recommended it to me had said it was a fantasy book set in a make believe world. Um . . . hope someone sets her straight on the reality of the world the book takes place in. Carrion Comfort was okay. I felt bogged down by it as well, but did manage to get through it. It didn’t leave as much of an impact on me as did Kali or some of his other works like Summer of Night and A Winter Haunting. Believe it or not, however, my favorite book of his was Darwin’s Blade which was a mystery / suspense tale. I’ve read it several times and will probably pick it up again soon. I love the story and the main character.

I've read this masterpiece as well and was totally floored when I finished it - hard to believe it was Simmons' first novel. I was so impressed that I read Carrion Comfort shortly afterwards and I recommend that one as well, though I admit it's length is a bit intimidating.

I read this last summer! Had been hearing about its excellence for years, and wasn’t disappointed. Everything you write here is spot-on Will. Also works as mystery, international thriller, and dystopia, and is all the more powerful for its (relative) brevity. Not a word, scene or character is wasted. A truly great horror novel.

I have other Simmons books I haven’t got to, and I agree their length can be foreboding. But another shorter Simmons work I can heartily recommend is his novella “Dying In Bangkok,” which similarly fuses dread with exoticism, and is also tense and packs a wallop for an ending. It’s been anthologized a few times, if I’m not mistaken.

BTW the edition I read of Song of Kali is 4th from the bottom, with the purple lettering. The stock Indian princess (???) photo is about as scary as Cinderella. The other covers here are much more fitting.

This was a really impressive work, and striking in its originality. Its notoriety is justified.

I feel it did go too far at one point, though (anyone who’s read this will know what I mean). But that just shows how, while horror MOVIES have to follow rules, horror NOVELS do not, i.e., in watching a mainstream horror movie, you’re pretty much guaranteed that it won’t go beyond certain parameters… but, for better or worse, there’s no equivalent guarantee with horror fiction.

P.S.
Not that anyone would necessarily care, but by way of a personal anecdote: My wife is indifferent to my old horror novels, and knows nothing of the genre. So, I was surprised when she commented on my laying-around copy of this novel. Turns out that the author lives in her hometown, and she went to school with his daughter. It’s a relatively small town, so she said that Simmons is considered a celebrity resident, even being described as “friends with Stephen King.”

This book is powerful in a way, and well written and quite different from the typical 80-s horror novel. But do some search for what Indian horror fans have written about it, it is not very kindly.
The Calcutta Simmons make "come to life" is not a real place where people live and love, it is a metaphysical concept of pure darkness, brutality, suffering and prejudice. The fact that he only spent a few days in the city unfortunately DOES show. Almost every Indian character is negatively described. Kali Durga, who indeed is fearsome warrior DEFENDING THE WORLD AGAINST DEMONS, is turned into a godess of evil. Now the book universe Kali does not have to be the same as the mythical Kali, but this seems to be the way she is viewed by Indians in-universe as well - as if Kali cults are akinn to devil worship, selling your soul for power, which just isn´t remotely accurate.

Simmons rules. "Carrion Comfort" is as good as horror fiction gets. I'm halfway through the audio book of "Kali," and I'm not liking little Victoria's chances. Sometimes dead IS bettah.