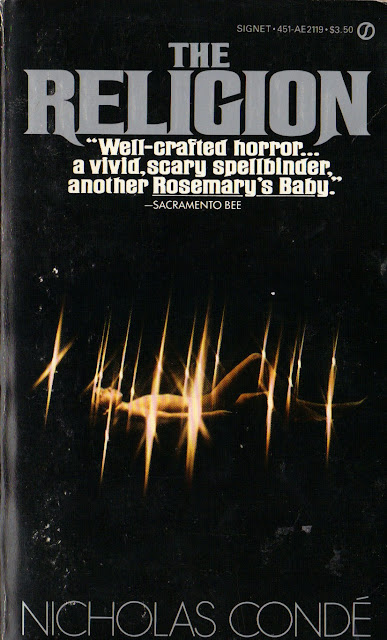 Wow, I haven't had much luck lately finding good, forgotten horror fiction surprises. Comparing this book to Rosemary's Baby is wildly inaccurate. Ira Levin's classic novel is a concise and wittily ironic tale of urban paranoia and maternal instinct disguised as a Satanic horror story, while Nicholas Condé's (nope, I have no idea who he is either) first novel The Religion is a straightforward, one-dimensional, vaguely entertaining, extremely mainstream novel whose every attempt at suspense fails utterly. Each detail the author includes to hide who the real bad guys are only convinces you otherwise; his misdirection leads you right to the actual culprits. It hardly counts as true horror fiction, only an of-the-moment bit of bestseller flotsam. The Religion attempts terror but in the most superficial pop culture way possible. 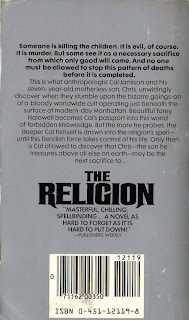 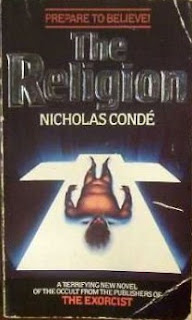 Since both book and author were unknown to me, and the back cover copy didn't make it sound horrible, I took a chance when I bought it (do I really care that a Publishers Weekly or Louisville Times book critic couldn't put the book down? Bah). But there are no surprises anywhere, not in characterization or plot development (well, one character seems based on Margaret Mead, which made for some decent reading). 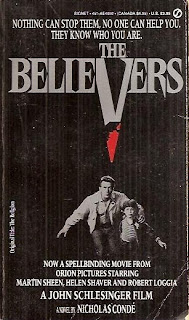 Made into a movie I've never seen


Every single New York City setting is presented like an '80s TV movie, with about as much invention: Central Park, Columbia University, the psychiatrist's office, the occult paraphernalia store, the morgue, the police station, the cult ceremony. Even the downbeat ending was telegraphed. Early on I liked the academic anthropology angle, but making "the religion" an actual one - Santeria, a voodoo variant - showed little imagination and a weird sort of tasteless cultural appropriation. I think if Condé had created a bizarre cult of his own, I'd have been much more into The Religion, but I guess I'm just a horror fiction atheist after all.
Posted by Will Errickson at 4:16 PM

I loved the movie "The Believers" when I was a child. I read the synopsis of the book, "The Religion" and it doesn't sound anything like the movie. I guess I'll have to find a copy and discover it myself.
Have you read "Communion" by Whitley Strieber? Christopher Walken plays Strieber in the movie by the same name. Excellent movie about how crazy a man can get when no one believes he had been abducted by aliens, but the book is so hard to read. I've been trying for decades!

Al, I just watched the trailer for The Believers and it seemed like a near-enough adaptation of the novel (the spider scene is in the book!). But don't go out of yr way to find a copy of The Religion... really not worth it.

I've read some Strieber, his horror stuff, and quite liked it. Looking forward to reading The Hunger. However the whole "abducted by aliens" thing really leaves me cold. He's interviewed in Faces of Fear - which I've reviewed on this blog - makes him sound like a complete crank in a tinfoil hat!

I saw The Believers when it came out (in the good old bad old days of Times Square) and honestly a week later I saw Martin Sheen in the Herald Square area and I still have his autograph. He was outside of the St. Francis of Assisi church smoking and talking to a priest

I loved the book, but then I love cult stuff. Maybe it's because there are so many of them here in sunny Los Angeles! P.S. The spider scene has been stolen by so many books and movies since, it's ridiculous.

When I was in high school, I met the producer and a few of the actors who told me the film was cursed. I watched it on Netflix and enjoyed it better today than when I was younger. The acting is great. I worked on a TV show with Helen Shaver, who now directs. As someone who knows many people who practice the Religion in Hollywood, I have to say the writer got it down pretty well, although I also saw the ending a mile away. Still, you owe it to yourself to read it yourself. I bet you'll be pleasantly surprised.

Try to watch The Believers (1987) if you haven't seen it yet. It's one of the best horror films of the 80s with first-rate, A-list cast and direction. The effect of this dark religion on the minds and perceptions of its believers is portrayed straight and realistically, which is what gives it its horror.

I just watched THE BELIEVERS and enjoyed it a helluva lot more than the novel. Sheen is terrific, selling scenes of horror, well, believably (the opening alone--!). The other actors are very good as well. My favorite stuff was the juxtaposition of sleight-of-hand magic with superstitious belief (Richard Masur's death scene in particular). Similar to ROSEMARY'S BABY and ANGEL HEART movies only superficially, not nearly in their range, but fun nonetheless.