Nightwing by Martin Cruz Smith (1977): How the Gods Kill 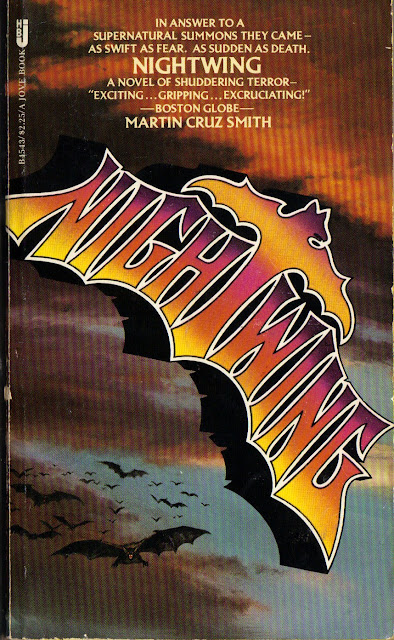 There's a moment early in Nightwing as three men explore a verminous vampire bat cave rife with unimaginable creepy-crawlies and filth and endure a moment of agonizing nightmare tragedy; it could be an otherworldly scene of horror straight out of Lovecraft or Clark Ashton Smith, but it's not - it's real, it's this world, and it's disgusting. Nature is great, except when it's trying to kill you. Or actually does.


The floor was a world of its own, a steaming brown soup of digested nectar, meat, insects, and blood. Twenty percent protein, it supported pools of bacteria. Over a million mites, scavenger beetles, toads and mountain crabs to a square yard. Giant cockroaches and venomous snakes. For them all, guano was a steady rain of food, or food for their food. The fall of an unlucky bat was a bonanza for them, and seconds of agony for the bat. 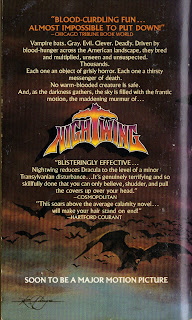 That's kind of the set-up for Martin Cruz Smith's novel. Not horror per se, the bestselling Nightwing still adheres to the generic template, and its pop cultural origins can be clearly seen: first and foremost, its killer-creature setup followed in the wake of Jaws; then there's is the "alternative spirituality" concerns of the Native American tribes; the threads of white guilt that had been gaining in the liberal conscience since the late 1960s; and overall a general sense that if humans fuck with nature, it will fuck right back (you'll recall Jaws had none of these angles; it was only about a thing with teeth that wanted to eat you). Vampire bats are bringing plague to the Painted Desert, but is it a natural disaster, or a bitter old Hopi shaman's curse to end the world? 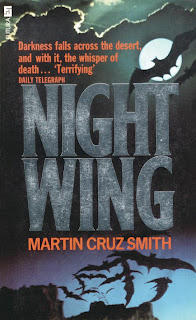 No less an authority than Stephen King included Nightwing in his list of important horror fiction in an appendix of Danse Macabre. Honestly I don't really see why, and I have little to say about the novel: it's boringly straight in most places with a few bouts of decently written bat attacks, with bits of biology and mythology woven in. Smith writes of the tensions between the white man and the Native American well in that he doesn't seem to be writing a polemic; the conflict feels natural, exacerbated by the "bat situation," and the Native protagonist, a man in his late 20s, is interestingly a conflicted failure. But Smith takes forever to get to the climax as various folks fall victim to the bats and others don't believe the plague is real: all your standard "creature horror" is here. 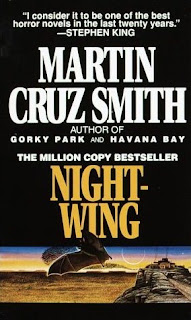 My favorite parts were definitely those in which one character speaks of vampire bat biology, Matt Hooper-style, of its unique evolutionary adaptations and heritage - "The two glorious specimens descended from tree-hopping insectivores are man and bats. We climbed down and they flew out, although we share the same hand in different forms... and the closest of all bats to man is the vampire." I'm a big fan of pop-science books so I preferred that stuff to the actual story. Also, dig the mythic past in which bats were considered gods by the various Native tribes:


But in the New World, the bat was god. His Mayan name was Zotzilaha. Whole cities and people bore his name and throughout Mexico temples carried his image: a striding man with the wings, face, teeth and tongue of a bat, holding a severed human head in one hand and a heart in the other. 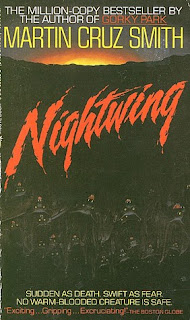 The original paperback (Jove/HBJ June 1978, at top) has a dumb title logo that looks like it was copped straight from a '70s hard rock band's album cover; the UK and later reprint paperbacks fare much better, though there is nary a goth moment to be found in the book itself. Smith was the kind of bestselling author I never had any interest in reading, which is why I've only come to Nightwing now. I remember watching the crappy movie when I was a kid and being utterly bored stiff; apparently the director made more of a "socially conscious" film (see Prophecy from the era as well) than a horror flick. Bleh!

Great piece! I remember seeing this book back in the day and passing it up because of the horrible cover. I'm not so sure that was a bad idea. When I chose the image I wanted for the cover of my "Nothing Men," I went for something that tried to encapsulate the feel of the book. When you stated that the cover logo looked like that of a cheesy metal band, I can tell you I thought much the same thing. And that kept me away.