Fangs, Rattlers, Death Bites, and More: Love You Like a Reptile 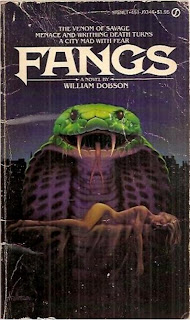 Hook-toothed serpents and leathery alligators seek the greatest prey of all - humans! Nothing like some vintage horror cover art featuring animals gone amok. Although man-eating creepy creatures, whether mutated or in just their natural state of deadliness, have always been one of the horror genre's mainstays, after the success of Jaws (1974) you could barely escape them. Today I present a fearsome collection of herpetophobic paperback horror. First is Fangs (Signet 1980) which features an added taste of exploitation, the ever-popular naked lady. 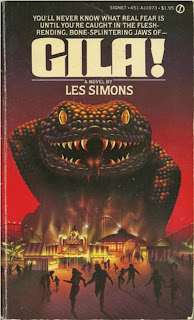 Now I remember furtively reading a copy of Gila! (Signet 1981) in the public library when I was 11 or 12, marveling over, of course, the conflation of sex and violence and its overall tawdriness. Les Simons is the pen name of Kathryn Ptacek, wife of the late Charles L. Grant and prolific author in her own right. 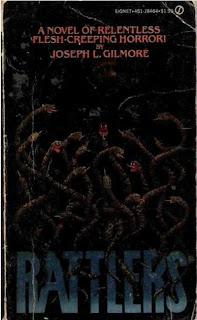 One rattlesnake is plenty scary, but a nest, a swarm, a rhumba of them? Rattlers (Signet 1979) might be Indiana Jones's purest nightmare. 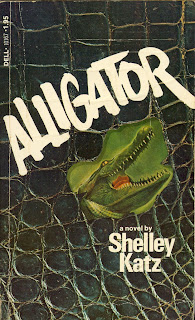 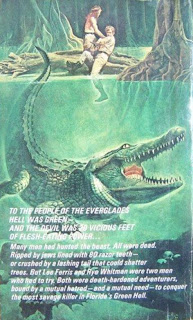 This 1977 Dell paperback of the prosaically-titled Alligator (what, no exclamation point?) is excellently done; how can you not love those forest green scales? And something about mysterious underwater action - seen much more often post Jaws, duh - coupled with above-water scenes has always fascinated me: this back cover is an undeniably glorious work of horror/thriller paperback art. 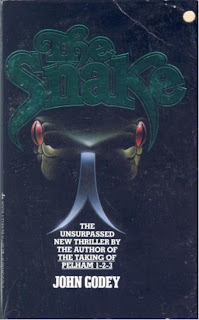 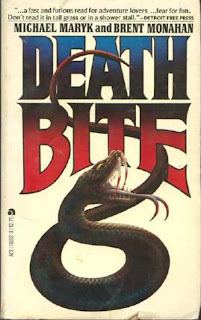 Oooo, Death Bite (Ace 1980)! Actually Brent Monahan went on to write more horror fiction alone, including one title that I see on almost all my used-bookstore jaunts, The Book of Common Dread from '93. This falls just outside my (self-imposed) vintage-era limit, so...

Posted by Will Errickson at 6:42 AM

Fantastic covers! And I'm sure this is just the tip of the iceberg when it comes to reptilian horror. I'd buy the Alligator novel just because I'm a sucker for die-cut covers, plus the illustration is very well made.
Question regarding "Gila!" - is the novel really about a giant Gila Monster? Or did the artist take some artistic license?

Wow, these are some great covers. Very creepy. I may have to grab a couple of these to see what they're like.

These are definitely some of my fave covers ever!

Will, if you don't mind my curiosity, what is your self-imposed vintage era? As in, from when to when? What makes you focus on that specific time period (aside from super-excellent cover art)?

My upper limit is somewhere in the early to mid-'90s. That's about when I stopped reading horror originally, and I think a lot of the great cover art ended there too. It's possible I could give Monahan's book a shot at some point, but with so much stuff I'm trying to get to - I'd like to actually read and review more "classic" horror like Machen and Blackwood and Crawford and maybe even some of the 19th cent. ghost stories - it's unlikely that I will. Also, I feel that authors that have been writing in the last 2 decades in horror are much more accounted for in ye olde blogosphere, esp now with the advent of ebooks, which, rest assured, I will never, ever, cover here. No interest. Same as it ever was 'round here - gimme gimme vintage horror!

I actually owned and read Alligator, The Snake, and Death Bite back in the 80s. (And Alligator is still in a box somewhere.) I'd binge at used bookstores, grabbing every "Nature Amok" book I could find.

But I've NEVER seen Fangs, Gila!, or Rattlers...so, thank you!

THEY MUST BE MINE. To the Googles!

Yeah! I've got most of these. I went on a major critter-book rampage lately, so they've been piling up. I read Gila... it's ridiculous but in a good way. Love Alligator when I was back in high school. And they actually made a movie from Rattlers...

Greetings from Italy. Incredible as it seems, the day after I discovered this blog and read this topic, I was browsing a used books store in Milan that keeps a small selection of original language books and among the usual bestsellers...a dusty copy of Gila! I immediately got it along with another obscurity (to me, at least) called "Land's end". :o)

Giulio, I am no stranger to those kinds of coincidences. Sounds pretty cool to me!

Will, I was an easy mark for many of the "nature runs amok!" sub-genre back in the day as well. Couldn't get enough of 'em sometimes & as you're obviously well aware, there was rarely, if ever a shortage of them during the horror paperback heyday period.
And, damn it, even if ( which was often the case ) the prose within was sub-par ( or, on occasion, sub-excrement! LOL ) it was OK, 'cause the lurid, over the top artwork on the covers just looked so cool sitting on your shelf. Right?
And, honestly, though I'm sure a lot of it has to do with the joy of youthfulness I was experiencing while reading them, I remember getting a kick out of most of them.
Then, when it appeared that many of the paperback originals authors & pulp writers on this side of the pond seemed to have exhausted their output of such stuff, the UK boys began churning out work in a similar vein that was even that much MORE over the top & lurid in the mid-'80s. With Guy N. Smith, Harry Adam Knight, John Halkin & several others producing seemingly twice as much ( or more ) than their US counterparts ever did a couple/few years previous.
Some of these books took a while to find US publishers or never even reached the market here, but I had the good fortune of living just 15 minutes or so from the Canadian border, with a good many bookshops nearby, all of whom carried plenty of UK paperbacks.
And, man did I love my 'British nasties"!

Look for "The Mountain King, about a housing project built over a huge den of rattlers!