The Searing by John Coyne (1980): Now She's Got No Cerebellum 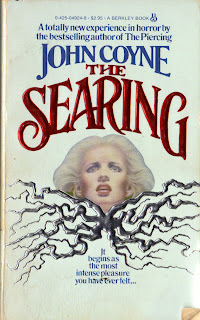 Despite its all-too-glaring titular indebtedness to the vastly superior bestselling horror novel The Shining, The Searing is not a part of any horror fiction tradition as I consider it. There's a slick superficial feel to this John Coyne novel that means one forgets it not long after reading it; already it's drifted from my mind even though I finished it less than a week ago. It may be billed as a novel of unrelenting terror, but it exists in that bland and banal universe of yesterday bestsellerdom. There's no Lovecraftian awe, no attempt to depict "how-we-live-now" of King, nor the prosaic reality of Matheson or the maniacal tasteless glee of Masterton. Spoilers coming so highlight if you know or don't care: The Searing's a thin soup of then-current pop culture "ideas" like telepathy and Uri Geller, sexual "liberation" books about the female orgasm, Von Daniken's ancient aliens BS, and even a nominal nod in the direction of Carl Sagan's Cosmos popularity, all obviously thrown in to get people to part with their money. 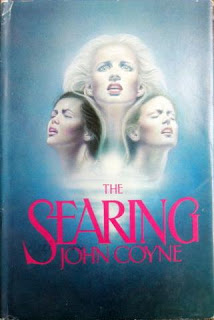 1980 Putnam hardcover
Women in a newly-developed suburban enclave in what was once the Virginia wilds outside DC suddenly experience horrifyingly intense orgasms while feeling what they describe as a "searing" in their brains. It proves fatal for some - seared brains blown out noses and such - then the intensity grows and the others fear for their lives. There's also a young autistic girl (constantly referred to as "retarded" reminding you this was the late '70s, folks) who seems to have some connection to it all. Factor in some manly men and passages like this:

He knew he had to control, to make decisions for both of them, and without giving her a chance to protest, he stood and picked her up in his arms. She was lighter than he expected, a child's weight, and he carried her across the living room and up the dark stairs to her bedroom. He would protect her... 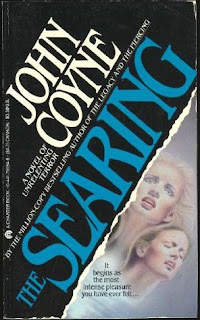 1987 reprint Charter Books
That's an adult woman being carried up the stairs. Blech. Still, Coyne isn't a terrible writer, and the mystery of "the searing" along with a few shocks of violence against infants and women make turning the pages easy, but overall it's just a blurt of hackneyed situations and execution. Much of The Searing reminded me of mediocre '70s Hollywood horror films like Burnt Offerings, The Sentinel, The Manitou, Audrey Rose, etc. In fact I'm sure the movie rights were bought up for this, and that at one time Jane Fonda, say, or Faye Dunaway or Katharine Ross or Farrah Fawcett or Sissy Spacek were, as they say, "attached" to the project. Anyway, it's a diverting read, dated and inconsequential, but by no means a must-read, and really with no connection at all to the horror fiction we all truly love.
Posted by Will Errickson at 1:20 PM

Burnt Offering and the Sentinel scared the bejesus out of me. But I know what you mean about that eighties blandness.

Have to take umbrage with Burnt Offerings (the film) being referred to as mediocre. Thant movie is way entertaining!

I thought BURNT OFFERINGS was good when I saw it as a kid. Recently, it bored me.

I preferred THE APOCALYPSE, the sequel to THE SENTINEL.

As for THE SEARING: awful.

I believe I read all the Genre stuff Coyne produced back in the day. Some of which I quite enjoyed, while others... well, let's just say, not. so. much. There were a couple toward the end of his run there that were a definite chore to get through.

From what I recall though from close to 3 full decades back, his THE PIERCING & HOBGOBLIN were pretty good page turners.

I hate when guys make orgasms part of the plot. Whitley Strieber did it with The Forbidden Zone, and R. Patrick Gates did it with Jumpers. I loved Jumpers except for that.
I have a few John Coyne books, but I haven't read any except "Fury", which was okay but nothing special.