Nine Horrors and a Dream by Joseph Payne Brennan (1958): The Goo Goo Muck

When it comes to pulp horror fiction, I don't think there's any doubt that "Slime" is one of the perfect gems of the style. Originally published in a 1953 issue of the venerated magazine "Weird Tales," Joseph Payne Brennan's 30-odd page tale is rife with all the weaknesses and all the glories of pulp horror in full flower. Brennan overuses words and phrases ("hood of horror" and "black mantle"), utilizes some weak analogies (alien as... some wild planet in a distant galaxy), and his country dialogue makes "Hee-Haw" sound like Olivier reciting the Bard. Indeed these "weaknesses," when delivered with conviction and narrative skill, are to my mind the most enjoyable aspects of vintage pulp. 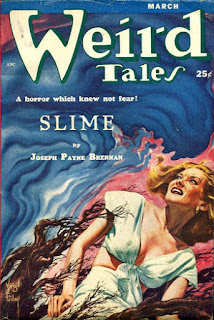 The central image of "Slime" is a roiling mass of sentient, ravenous black muck formed at ocean bottom—when the earth and sea were young—and is so utterly disgusting, so enthusiastically detailed, so shivery wrong you will be, forgive the pun, sucked right into the story. An embodiment of the inchoate unconscious, straight from the nightmare world of our worst fears, slithering about on the lightless, unknowable sea floor (man this style is contagious). Brennan imbues this noxious goop with predatory sentience:


It was plastic, essentially shapeless... by turns viscid and fluid... It was animated by a voracious, insatiable hunger... When the lifting curtain of living slime swayed out of the mud and closed upon [its victims], their fiercest death throes came to nothing... The horror did not know fear... The black mantle reigned supreme.

After an undersea volcanic upheaval sloshes it up from inky oceanic depths, the slime finds itself in a swamp outside a rural town. Images of it streaking out of the fetid grove of trees, vines, moss, and mud, onto land, over fields, to raise up and pounce on its hapless victims is nothing short of revolting. "O God," cries a woman who saw it but survived, "the darkness came alive!" You can imagine what occurs, all the story beats and characters and the efforts to dispatch this slimy blackness that had no essential shape, no discernible earthly features... a black viscid pool of living ooze which flowed upon itself, sliding forward at incredible speed. No doubt about it: "Slime" is a stone-cold horror classic about a perfect eating machine. 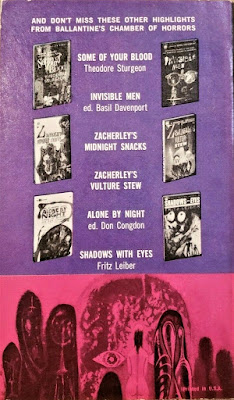 It is the lead story in Nine Horrors and a Dream, one of the oldest books in my horror paperback library. A slim Ballantine paperback from 1962, it's part of a series of that publisher's horror paperbacks, known as "Ballantine's Chamber of Horrors." Other titles from gents such as Fritz Leiber, Theodore Sturgeon, Charles Beaumont, and those of like mind were included. This collection contains stories (mostly) published also in "Weird Tales" throuhout the early 1950s; it is Brennan's first of many short horror fiction collections.

A garishly creepy Richard Powers cover of surreal shapes, swirls, squiggles, and something like spider legs adorns the Brennan cover, with more of the Powers abstract imagery in the ad for the other books on the back cover, as seen above. Why, yes, that's Zacherle! Now, I myself prefer the folksy cover for the original Arkham House hardcover from '58, with Frank Utpatel art, a more accurate representation of Brennan's style and content. But, you know, that's just me! 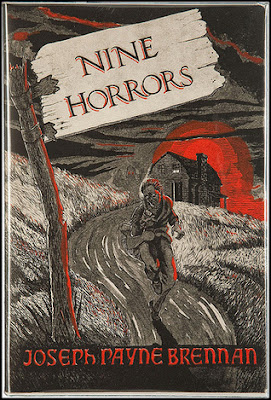 Brennan was a lifelong resident of Connecticut, where virtually all of his work takes place, and wrote horror, fantasy, and poetry. He created Lucius Leffing, an occult detective, but I haven't read any of those stories. Brennan also created horror magazines to encourage other fans and writers of the supernatural, and was an early bibliographer of Lovecraft. "Slime" is easily his most famous work, and rightly celebrated, but Nine Horrors contains one other stone-cold masterpiece, so let's move on to that, shall we?

Concerning a desolate plot of land and its effects on the owner, "Canavan's Back Yard" has also long been lauded by horror fans, and if you haven't read it, please do so at your earliest opportunity. Narrated by a writer who befriends a bookseller who's moved himself and his wares into a house on the outskirts of town, this tale features not the overheated pulp stylings of "Slime," but a more somber and reflective tone:


a long desolate yard overgrown with brambles and high brindle-colored grass. Several decayed apple trees, jagged and black with rot, added to the scene's dismal aspect. The broken wooden fences... appeared to be literally sinking into the ground. Altogether the yard presented an unusually depressing picture... 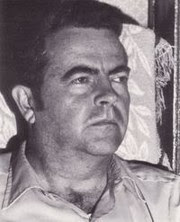 Our narrator spends his mornings writing and his afternoon in this fellow's little bookshop (ain't that the life!), and soon notices Canavan becoming preoccupied with this landscape, always gazing out his window, even to the detriment of his mail order bookselling business. One day he comes in and outside spies Canavan coming out of the tall grass in the yard, a lost bewildered expression on his face. He tells our writing pal, "I'll have no rest till I solve the riddle of that piece of ground." Next visit and Canavan is nowhere to be found inside. Then, with infinite dread, our narrator looks through the window:


The long stalks of brown grass slide against each other in the slight breeze with dry sibilant whispers. The dead trees reared black and motionless. Although it was late summer, I could hear neither the chirp of a bird not the chirr of a single insect. The yard itself seemed to be listening.

What happens after I won't spoil. The precise, measured pace of the telling heightens the horrific reveal; in fact I (re)read it late at night before bed and yes, its uncanny mysteries lingered.

The other stories here are competently written, but rather minor and for "Weird Tales" completists, I feel. Set-ups reminded me of he likes of Roald Dahl, Gerald Kersh, Fredric Brown, short story writers like that, but not as fiendishly clever or brutally unexpected. They take moments to read, and the twist endings barely register; they simply restate what was obvious from the opening passages: "If you ask me, chum, the murderin' thing in the black raincoat was something dead that came up out of the sea!" 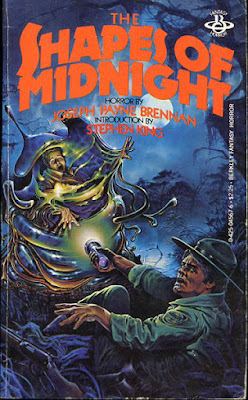 "I'm Murdering Mr. Massington," besides sounding like a classic Smiths song, is a non-supernatural work first published in Esquire mag, so, you know, class. You know how writers always get that query, "Hey, my life story would make a great book, you write it and we'll split the money," or "I have a great idea for a story, etc." (and that idea is always just an old "Twilight Zone"), well here a writer meets a melancholy fellow in a bar, and said fellow finds the idea of being forgotten after his death intolerable: ridden by a single, overwhelming obsession. Fellow begs narrator to write a story about him so he will be remembered, a record of his person. The twist is fatal. Poor guy.

"The Hunt" is about another poor guy being followed on a train by a man who, for some unknown reason, is scarcely short of terrifying. Of course he cannot escape this stalker, and their final confrontation in the last sentences would work a lot better if it weren't marred by some perplexing dialogue. "The Mail for Juniper Hill" gets some decent mileage out of a raging snowstorm setting, the kind of tale you just know Stephen King read as a kid, with New England old-timers marveling at "Big Ed" Hyerson, the local ne'er-do-well, a hard-drinking, skirt-chasing rascal. Told in flashback, we learn Ed is super-reliable as a mail carrier, no matter the condition of road or weather. Aforementioned snowstorm only makes Ed more determined to deliver sacks of mail, and he does; but not before freaking out all those old-timers, giving them a deadly chill which was not of the storm. 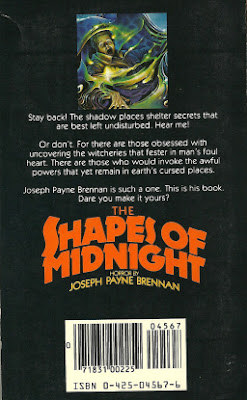 "Death in Peru" presents some decent travelogue descriptions, especially in the description of a treacherous mountain hike: he seemed to have entered another world, a world composed of soundlessness and space, a timeless world of brooding mystery where even the eons left hardly a sign. The reveal is predictable, alas. I enjoyed "The Calamander Chest," dude buys a fancy chest for cheap then it starts to creep him out for a very valid reason; the tale ends with a perfect line of fatal irony, a permanent change of locale indeed—which would have made for a much better title, methinks. "Levitation" is cute enough, like something from early Bradbury in "dark carnival" mode, while "On the Elevator" and "Green Parrot" are inconsequential.

Other than "Slime" and "Canavan's Backyard," Nine Horrors isn't an essential unless you collect Powers covers or the other "Chamber of Horrrors" titles; better is Shapes of Midnight, a 1980 paperback with a King intro (see above), featuring those two tales and later Brennan works I enjoyed more, such as "The Willow Platform" and "The Horror at Chilton Castle" (the latter collected by Ramsey Campbell in his 1988 anthology from Tor, Stories That Scared Me, which scared me too but I haven't reviewed here yet). Pleasant enough reading to while away a couple hours, however, and you'll forget neither that loathsome "hood of horror" nor the otherworldly curse of "Canavan's hellish back yard!"

I used to have an anthology of Animal based horror stories that contained 'Slime' along with stories like Sir Arthur Conan Doyle's 'The Terror of Blue John Gap' and Ray Bradbury's 'The Foghorn', regrettably it disappeared in a move many years years ago and I've forgotten the title, but given that company that I remember 'Slime' sharing in that book definitely speaks to the stories quality.

My guess is that you had Ireson's CREEPY CREATURES, which contains:
Slime by Joseph Payne Brennan
Running Wolf by Algernon Blackwood
The Terror of Blue John Gap by Arthur Conan Doyle
The Troll by T. H. White
The Fog Horn by Ray Bradbury
The Quest for Blank Cleveringi by Patricia Highsmith
The Lonesome Place by August Derleth
The Valley of the Beasts by Algernon Blackwood
It by Theodore Sturgeon

I know the post is about SLIME, but for my money Sturgeons IT -(way before Kings btw!), is the perfect sentient slime monster. But Ive always liked the more urban-ish Sturgeons-style compared to the folksiness of JPB. Those abstract Richard Powers pb covers from the mid-century are dear to my heart i gotta say though. The Virgil Finlay cover with its clash of contrasting colors is quite gorgeous too!

I have that very same copy of "Shapes of Midnight". I liked a lot of what I read. Some of it's certainly dated, but I don't mind that and find it enduring, actually.
I'm pretty sure I have an anthology with "Canavan Calling" the sequel to Canavan's Backyard" somewhere. I haven't read it yet, though.

I have a nearly lifelong fondness for JPB's "Levitation"...which struck me when very young as a nearly perfect vignette. First appeared in NINE...

A few years back, finding Brennan poetry in THE NEW MASSES was an amusing surprise.